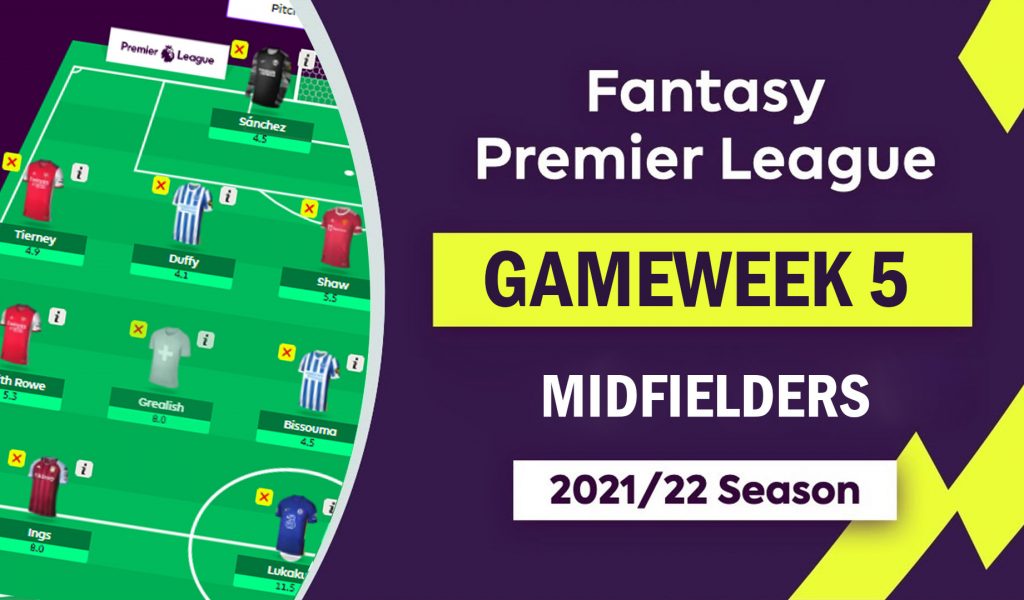 The Gameweek 5 FPL deadline is rapidly approaching, with an earlier Friday evening opener this week. With so much UEFA Champions League and Europa League going on this week, now is the time to hold off on any transactions as long as needed. On Friday, Newcastle and Leeds begin GW-5, adding to an already hectic week.

Keeping these fixtures in mind, let us have a look at this Gameweek’s best midfield options to help you pick up the most FPL points possible this weekend:

The Portuguese attacking midfielder recorded his first attacking yield after Gameweek 1’s hattrick with a humdinger against Newcastle United. The return of Ronaldo has indicated a nosedive in the ownership of Bruno Fernandes. The attacking midfielder could no longer be subject to penalties, and many FPL managers could perhaps drop Fernandes to bring in Ronaldo. Since he has arrived in the Premier League, Fernandes has been very successful; replacing him this early could prove to be a bit too impulsive. However, Bruno was a key part in United’s link-up play and still remains a threat going forward.  While also picking up a goal, he created 8 chances, 2 big chances and also produced an xA of 1.31. He also had 5 shots in the box along with an xG of 1.49.

In Gameweek 5, Manchester United encounter West Ham (a). The Hammers have been pretty strong at the back and have unfortunately allowed five goals. They have conceded just 5 big chances and their xGC is just 3.7. The Red Devils have been excellent when it comes to attacking play so far it seems that most teams will find it hard to keep them silent. United have produced an xG of 7.8, 42 shots in the box, 12 big chances and have scored the most goals in the league (11).

Only death, taxes, and Mo Salah regularly providing points for your FPL team are certainties in this world.  He returns to Anfield this gameweek, and Liverpool’s offense has recently resembled that of their title-winning season. In Gameweek 4, Mohamed Salah put on yet another outstanding performance in a 3-0 win over Leeds United. With this performance, he now has three goals and two assists in four games along with six bonus points. The winger has produced an xG of 2.70 along with the third-highest shots in the box (13) and the most shots on target for any player in the Premier League (8).

In Gameweek 5, Liverpool will face Crystal Palace. Considering Palace’s excellent 3-0 win over Spurs, this appears to be one of the week’s most intriguing matches. Liverpool have been the most efficient attacking side in the league as proved by their statistics. The Reds have scored the third-most goals (9) in the league along with the most shots on target (34), the most shots in the box (70), the second-highest big chances (14), and the highest xG (11.4).

When it comes to defense, Palace has been quite solid. They have allowed just 24 shots in the box, 14 shots on target and an xG of 3.8. However, it is a common feeling that Liverpool will be too strong for them, also considering the fact that the game is at Anfield. Salah’s statistics show that he is still the strongest FPL alternative available. This Gameweek, he’ll likely be one of the most captained individuals.

Thus far this campaign, the Spaniard has been a part of the starting lineup in all of the matches for the Citizens. He has also garnered two goals and an assist in the process.  Furthermore, he is putting up some outstanding figures. His xG of 1.86 is the highest among his City colleagues and he has enjoyed 10 shots in the box along with 3 big chances. We’re all aware that selecting Manchester City forwards for our FPL sides is a risky business. However, there are instances when a calculated chance must be embraced. Pep Guardiola promised that he would maintain selecting players who are playing effectively, and he has kept his word so far.

Torres’ owners should be comforted by the fact that he participated in all three games over the international break and somehow still managed to pick up a start in Gameweek 4. He’s also their strongest finisher right now, hence why Pep plays him upfront. Torres appears to have little opposition in leading City’s attack now that Gabriel Jesus (£8.6m) has been moved to the right flank. In Gameweek 5, Manchester City host Southampton at the Etihad over the weekend. On paper, it appears that the Citizens will come out on top.

City have enjoyed one of the best-attacking numbers in the league this season. They have the second-most xG of any Premier League side (10.3), the second-most shots in the box (56), and the highest big chances in the league (15). Considering their quality attacking depth, Guardiola’s team is quite capable of scoring more than a couple of goals in this encounter. As a result, selecting the player who will play in the center forward role for them could reward well. The fact that he’s only worth £7.2 million is a significant advantage.

MUST READ: Ferran Torres – The tactically flexible centre-forward Pep Guardiola has been longing for

At just £7.7 million, Jota is yet another reasonably priced alternative. This is especially the case with his teammate, Roberto Firmino being injured for the meanwhile. His stats show how unlucky he has been to have scored just two goals in the league yet. The winger has an xG of 1.86 along with 9 shots in the box, 3 big chances, an xA of 1.42, and has also created 8 chances including 2 big chances.

His statistics really deserve a pricing label of at least £9.0 million. Since Jota is assured a start against Crystal Palace this week, he is one of the best alternatives for Gameweek 5. Liverpool have the best-attacking statistics in the league as mentioned earlier. When Jota leads from the front, he’s too useful a choice if such an amount of minutes are assured. If it were not for Mane’s poor finishing against Leeds last Gameweek, Jota could have had two more assists in his name.