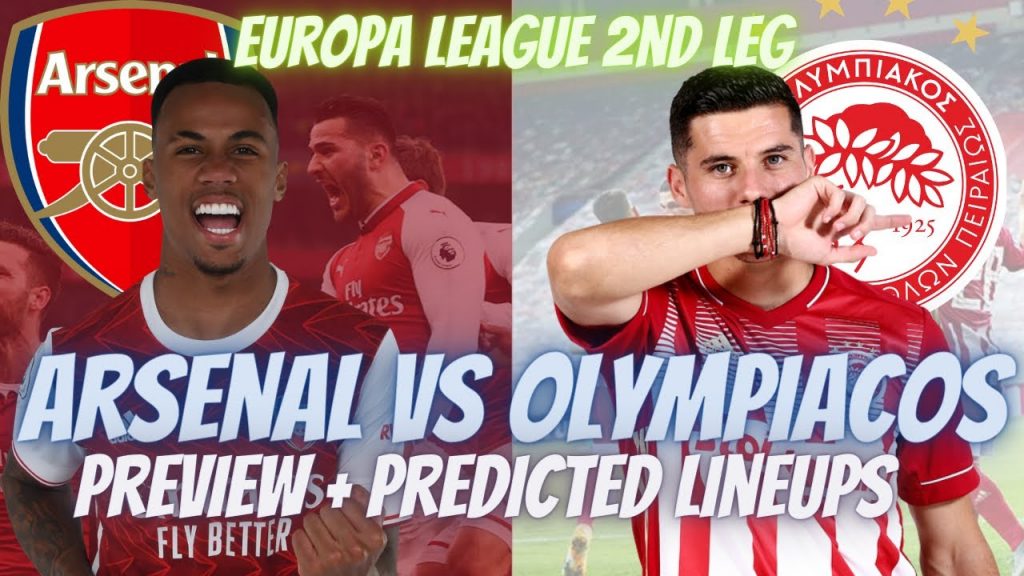 It has been a jubilant week for Arsenal fans as their club has managed to pick up 2 crucial in a matter of 7 days. While the win the over Tottenham would’ve meant more for the players and Mikel Arteta, the 1-3 away win they secured against Greek side Olympiacos, in the Europa League, is the more crucial victory for the club.

Arsenal with little to no chances of securing a Champions League spot through the Premier League next season are focusing all their energies on to the Europa League and while in recent years they have reached extremely close to winning it, this might be the year the Gunners pull it off. However, they have a very stubborn and intense 2nd leg against Olympiacos to get through if they want to reach the quarter finals of the competition.

This fixture has a lot of recent history as it was only over a year ago that Olympiacos knocked out Arsenal in the Round of 32 of the Europa League. What was more painful and similar this time round as well, is that Arsenal are going into the 2nd leg with an away win. While last year they were defeated on away goals, it looks highly unlikely that it will happen again this year, as the Gunners poached 3 away goals to all but seal a place in the next round of the competition.

DOES OLYMPIACOS HAVE A CHANCE OF CAUSING AN UPSET AGAIN?

Olympiacos might have faltered big time against Arsenal in the first leg, however, an early goal in the second leg could completely change the complexion of the game and Olympiacos are very capable of doing so and they have the firepower for it in Youssef El-Arabi.

Olympiacos are first in the Greece Super League with a difference of 17 points between them and the rest of the pack and a lot of this is down to El-Arabi. The 34year old has scored 36 goals in 48 games over 2 seasons for the club and they have relied heavily on the Moroccan this season with Arabi scoring 19 this term. He was on target again last Wednesday against Arsenal, as he scored Olympiacos solitary goal and gave some hope to his club of making a comeback in the 2nd leg.

Olympiacos are currently averaging 10 shots a game in European competitions and if they can pull off this against Arsenal, they might just about have a chance to cause an upset for the second consecutive year against the same opponent.

HOW WILL ARTETA SET HIS SIDE UP?

It was a major shock on the weekend when Mikel Arteta benched Arsenal’s joint top goal-scorer in Pierre Emrick Aubameyang against Tottenham, and while it was a huge call, it turned out to be the right one as Arsenal won the game 2-1. However, Aubameyang is most likely going to come back into the starting XI on Thursday night as Arteta hopes he can avoid an upset from the Greek side for a second consecutive year.

Arsenal’s recent hero, Martin Odegaard, is most likely going to be the first name on the team sheet as his performances since the start of March have been a level above the rest of the squad and he will be trying to get on the scoresheet again as he did on the weekend in the North London derby.

The likes of Gabriel and David Luiz will continue in the center-back positions, although, it won’t be a surprise if Pablo Mari starts in place of either player as Mari has also been impressive since the start of 2021. Tierney and Bellerín will surely be the full-backs as they have cemented those positions for themselves since the start of the season.

While Mohammed Elneny might also start in place of Granit Xhaka, the main change will be in the winger roles as either Nicolas Pepe or Emile Smith Rowe will replace Willian from the 1st leg. If Pepe does start, we could see Bukayo Saka moving on to the left-wing position, a role he is also very comfortable with. Although, with Saka’s recent hamstring concerns – we might see Willian getting a nod rather than risking Bukayo.

Mikel Arteta will be hoping his side can do just enough and reach the quarter-finals of the competition as they look to secure the trophy this time and given the strength of their squad and their experience in this competition, this could be their year.

3 Reasons why Chelsea vs Atletico Madrid is FAR FROM OVER!
AC Milan vs Manchester United: Preview | Europa League 2020/21
To Top