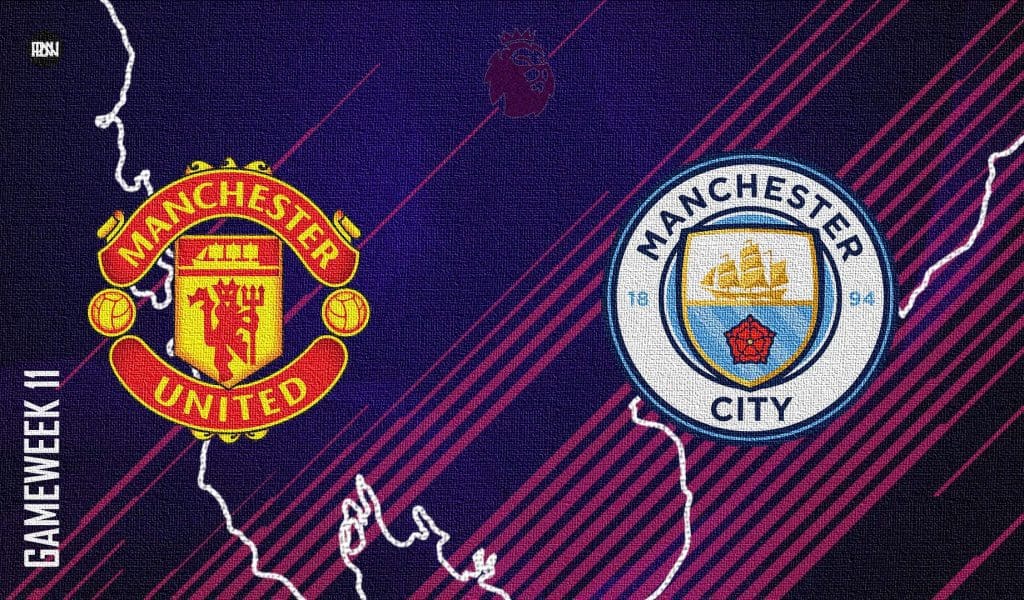 Manchester United are set to host Manchester City at Old Trafford in what promises to be a feisty clash. The Blue side from Manchester will look to bounce back after a shock defeat against Crystal Palace while the Red side inspired by Ronaldo will look to continue with their momentum after a win against Spurs.

The two teams are separated only by three points, but the situation in both clubs are of stark contrast. United find themselves struggling to play a brand of football and their defence led by Harry Maguire has not made an impact. The horror show against Liverpool will be fresh in the minds of the Red Devils before facing Manchester City. Meanwhile, the Cityzens have hit an inconsistent patch and every time they stumble to get past an organised defensive team – questions have been raised about not signing a striker.

Manchester United will be without the services of Paul Pogba – The French midfielder is serving a 3 match ban after being handed out the red card against Liverpool.  Raphael Varane who returned from an injury ahead of the Spurs game is said to be ruled out again due to a hamstring injury. He is set to be out for several weeks.  Victor Lindelof also suffered a knock in training but Ole is optimistic of his return ahead of the derby.

For Manchester City, Ferran Torres is a long term absentee while Aymeric Laporte is suspended after his red card against Crystal Palace. John Stones is set to partner with Ruben Dias at central defence. Kyle Walker is a doubt after picking up a knock in the midweek. Kevin De Bruyne should be recalled after being rested midweek.

Ole Gunnar Solskjaer will look to set up his side in the same formation as the last two games. The 3-4-1-2 seems to be working with Cavani and Ronaldo linking up well up-front. United’s game plan will be simple – sit back and counter with pace since it has worked in the past against City under Ole. Raphael Varane’s injury will be a big blow but the likes of Maguire and Bailly will be looking to perform better during the derby. In the midfield, Ole trusts Fred and Mctominay to cover the hard yards while Bruno Fernandes will be given a free role and will be looking to cause trouble to the City backline. United did not look at their best against Atalanta, but Ronaldo’s heroics again saved Ole’s blushes. The Red Devils will look at Ronaldo to inspire yet again against their bitter rivals.

Manchester City looked impressive and back to their old self against Club Brugge. Joao Cancelo provided 3 assists from the full-back position and created the most chances in the game. The Portuguese defender has been in very good form throughout the season and will look to continue against United. Pep should play Foden at false 9 as the 21-year-old continues to impress. Raheem Sterling could also get the nod after an impressive cameo against Club Brugge. City will look to maintain possession and frustrate United and force mistakes out of their backline.

Manchester United will depend on the inspiration from Cristiano Ronaldo but a striker can only finish the chances if it is created. Bruno Fernandes has gone under the radar since CR7’s arrival but his importance is ever-present to Ole’s men. Against City, Bruno will play a free role and will look to find space and create chances for the likes of Cavani, Ronaldo and Rashford. Ole will try and set up United in a defensive manner and look to hit City on the break with pace and for that to happen Bruno will be crucial on the transitions.

For Manchester City, it will be the other Portuguese international who will act as a key player. Bernardo Silva has been Manchester City’s best player this season and is the glue that sticks this team together. He has contributed goals and assists but his main role would be to stop the dangerous attacking transitions of Bruno and co. He has been given a box to box role this season and has thrived in it. Pep Guardiola will rely on Bernardo’s work rate and energy against United.

Chelsea vs Burnley: Match Preview | Premier League 2021/22
Jean-Luc Vasseur: Will Everton’s new manager have the necessary impact on the players?
To Top