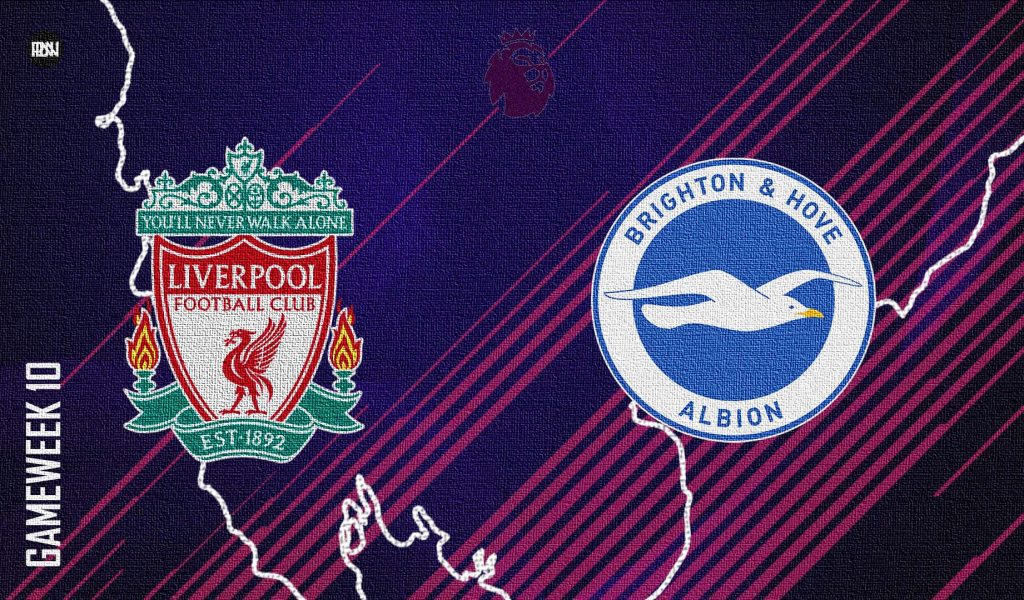 It’s Gameweek 10 of 38 in the 2021/22 English Premier League, and 20 teams will be ready to battle it out against each other for another week. This week sees a few interesting match-ups take place. One of them will kick off in Merseyside, where title-favorites Liverpool take on the surprise of the season in Brighton and Hove Albion at the Red’s beloved fortress that is Anfield.

After 4 away games on the bounce, Liverpool returns to their home once again, and the Anfield crowd will be geed up to sing out their rendition of the club’s famous song, “You’ll Never Walk Alone”, especially after that scintillating performance at Old Trafford last week. The Red side of Merseyside will have partied all night after their heroes humiliated their arch-rivals Manchester United with a scoreline of 5-0. After that performance, Jurgen Klopp and his men will get a resounding welcome back and there will be a fired-up crowd at Anfield ready to intimidate another opposition.

It was a faultless performance from the Reds last week, and they followed it up with another win in the Round of 16 in the Carabao Cup against Preston North End. Jurgen Klopp gave a deserved rest to his entire starting 11 from last Sunday, with only Roberto Firmino, Ibrahima Konate, and Diogo Jota making the matchday squad on Wednesday night from the 11 that played at Old Trafford. They will be rested and ready to face Brighton and take another three points.

Brighton and Hove Albion, in contrast to Liverpool, had a tough day against another Mancunian opposition in Man City last week. They were subjected to complete domination from Pep Guardiola’s men, as goals from Ilkay Gundogan, a brace from Phil Foden, and a late goal from Riyad Mahrez handed the Seagulls their second loss of the Premier League season. That loss left them a point off 4th placed West Ham United and level on points with Tottenham Hotspurs in 6th. Brighton have shocked all with their form and the quality of football on show, and manager Graham Potter’s stature has grown multifold in the past months. Potter has got the Seagulls playing an attractive brand of football and his admirers and the club’s admirers are also growing as a result. It will be a riveting contest on Saturday, with Brighton able to play beautifully with lots of possession while Liverpool loves to press the opposition high up the pitch and force them into mistakes. With the form the two teams have been in, it will make for an engrossing battle on the pitch.

Liverpool have a strong first-team squad available at their disposal, with Jurgen Klopp resting a number of key players in the midweek win against Preston North End in the Carabao Cup. However, the Reds suffered an injury blow last week at Old Trafford when James Milner went down with a hamstring injury, ruling him out until the November international break. Naby Keita was stretchered off in the same game, after a lunging tackle by Paul Pogba and it remains to see if he is fit for Brighton’s trip to Anfield. Brazilian midfielder Fabinho could return to the lineup after recovering from a knee injury, but fellow midfielders Thiago Alcantara and youngster Harvey Elliot are set to remain on the sidelines.

Meanwhile, Brighton and Hove Albion welcomed defender Adam Webster back into the lineup, after recovering from a hamstring injury, in the midweek loss to Leicester City in the Carabao Cup. Mali international Yves Bissouma made his first appearance for the club after more than a month, with the midfielder recovering from a knee injury to feature on Wednesday from the bench. He could be in contention to start on Saturday. Striker Danny Welbeck is still recovering from his injury and is absent from the squad for just about a month now. He will miss the trip to Merseyside along with midfielder Steven Alzate who is also recovering from an ankle injury.

The Egyptian winger arrived in the Premier League in 2017 and has taken the league by storm since. He has broken numerous records and silenced his critics in style. Since the winger’s move to Liverpool, he has gone from strength to strength and is now, perhaps deservedly, considered the best player in the world. Many credits the signing of Virgil van Dijk as the turning point in Liverpool’s history, but the signing of Mo Salah is what started their revolution and gave it momentum. The 29-year-old was tipped to be a one-season wonder, but after 4 seasons, the forward has shown no signs of slowing down. He remains the biggest threat in the Liverpool side filled with superstars, and it will be interesting to see how Brighton’s defense copes with him.

Salah has scored in every game but one in the league this season, and with a brilliant hat-trick against United, has now brought his tally up to 10 goals, and is leading the race for the Premier League Golden Boot. Although it is very early in the season, the signs are there that the Egyptian will go on to win his third top scorer award in the league. Brighton’s defense will have to be alert every single time Mo Salah makes any movement, such is the threat he possesses. There is no doubt that he is their main threat and nullifying him will be on Graham Potter’s mind going into the game. It remains to see how Lewis Dunk and Co deal with Salah, but the Egyptian is expected to get on the goal-scoring sheet and continue his blistering form.

Against Man City last week, the striker had a hard time and cut a forlorn figure in the final third. Brighton were not able to play the way liked with plenty of possession and had to adapt to their opponent’s style who were far from the superior side. As a result, Maupay did not have the best of times last week and was substituted just before the hour mark. He has been a crucial figure for the Seagulls this season, but with no significant chances coming his way against City, he had little impact on the pitch and had to make way early. Despite his poor showing at home last time out, he will be expected to be leading the line again on Saturday, against yet another superior opponent.

Graham Potter’s setup greatly benefits Maupay, with the striker being barely involved in the build-up play, but being in extremely good positions to finish off the attacking moves and secure points for his club. He provides huge influence in the final third, Maupay has structured his game in the area it matters the most and is also taking the chances that come his way. However, Maupay can ill-afford to waste any opportunity that drops to him at Anfield, with Liverpool guaranteed to make life very difficult for the visitors.

To say the Liverpool attack has been in-form would be an understatement. Jurgen Klopp’s men have dismantled opposition defenses with ease and their attack looks unstoppable at the moment. The Red’s attack has been free-flowing and is one of the best in the world right now. With a lineup that consists of Mo Salah, Roberto Firmino, Diogo Jota, Sadio Mane, and a supporting cast of rotational players like Takumi Minamino and Divock Origi, the Merseyside Reds have an attack that is strong in-depth and quality, making it one that strikes fear into hearts of defenders.

Liverpool have scored 5 goals in their last two league games, and are looking to become only the fourth side to win three games in a row by 5 or more goals, and the first since their title-rivals Manchester City in 2017. The Reds completely destroyed the Manchester United defense at Old Trafford last week and could have definitely won by a bigger margin against their arch-rivals. With 27 goals scored in 9 league games so far, the Reds have statistically the best attack in the league, which is complemented by a strong defense and a solid midfield.

For Graham Potter’s men, it will be a huge test. If they can get a result here, it will show exactly how far they have come, and how much they can challenge the top teams. After having spent the entirety of last season in the bottom half of the table, this season, the Seagulls have had a brilliant start to their campaign. Potter has imbued his philosophy and style of play onto the players, and it is clearly working, with the club sitting in 5th, just 2 points off 4th place. Their defense has kept 4 clean sheets in 9 games so far and will have to be on their A-game if they desire to stop the explosive Liverpool attack.