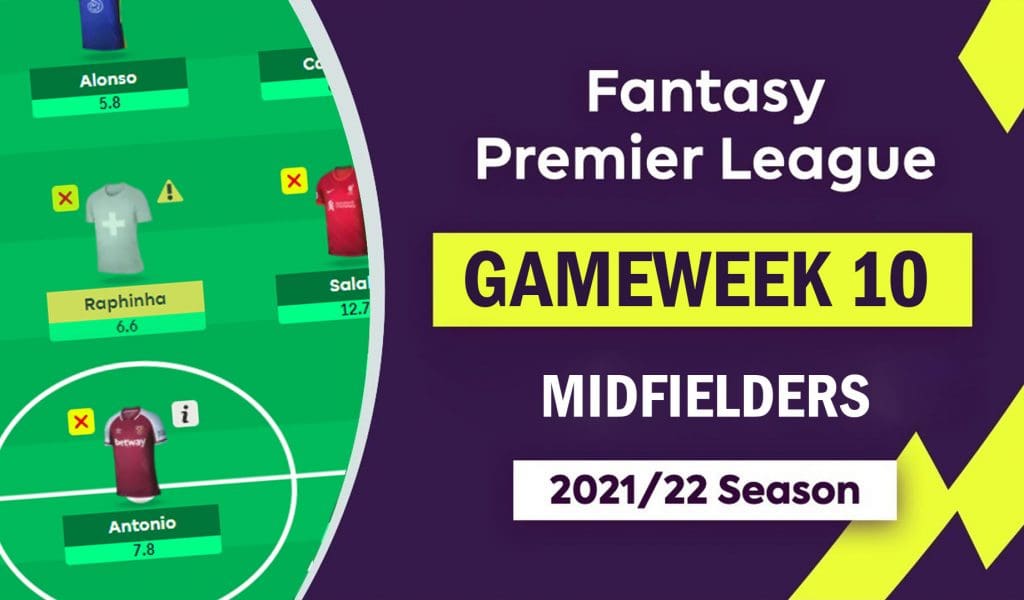 After a much-needed high-scoring game-week which, yet again, proved the resplendent providence of FPL, we turn attention to game-week as managers look to capitalize on their fortunes ahead of the upcoming international break. Amongst the premiums, Mohamed Salah (£12.9mn), now the highest selected player in FPL history (69.1%), continued his incredulous form, scoring an incredulous hat-trick against Manchester United last weekend. In the background, the likes of Mason Mount (£7.5mn) and Phil Foden (£8.1mn) produced convincing performances, with the former equalling Salah’s 24-point haul and the latter bagging a noteworthy 18 points in game-week nine.

Now, with a limited pool of proven premiums to choose from and differentials having displayed convincing performances heading into a friendly set of fixtures, the forthcoming game-week offers several managers the opportunity to rectify their shortcomings ahead of potentially high-scoring game-week. With numerous emerging differentials heading into a friendly set of fixtures, in this article, we take a look at three midfield assets most likely to provide substantial returns this weekend and examine their long-term potential ahead of the international break.

Having missed out on a potentially fruitful outing owing to a mid-game injury last weekend, the Brazilian is likely to return to the line-up ahead of a mouth-watering encounter against Norwich City on Sunday. Although yet to fulfil his potential, Raphinha remains Leeds United’s top goal-scorer (3) this season and their most potent threat in the absence of Patrick Bamford up-front.

Although yet to produce consistent returns this season, Raphinha has been impressively consistent since the beginning of the campaign. The winger registers a decent number of expected goals (0.35xG) and assists (0.21xA), and is Leeds’ primary creator in the attacking third.

Facing an underwhelming Norwich City side, the Brazilian remains in contention to produce a potential double-digit haul at the weekend. With Leeds in desperate need of three points, Raphinha remains their foremost outfield player to provide a goal contribution on Sunday.

After announcing his arrival following an average start to the campaign, the Chelsea midfielder is likely to produce the results expected of him heading into a favourable set of fixtures. Mount was amongst those that grabbed headlines last weekend after his remarkable hat-trick ensured Chelsea thumped seven goals past Norwich City at Stamford Bridge.

The midfielder grabbed his first attacking returns in six game-weeks last weekend, scoring an incredulous 24 points, and is likely to build on his impressive performance heading into game-week ten. Although yet to fire on all cylinders, Mount has managed to register three goals and the same number of assists, at an impressive expected number of goals (2.15xG), whilst having created 10 chances in the ongoing campaign.

Facing a Newcastle United side striving for defensive solidity, Chelsea – second-highest scorers in the league (23) – will be hoping to increase their monumental goal difference at the weekend. With Mount fresh on the back of a noteworthy performance last time around, the midfielder emerges amongst the favourites to capitalize on a relatively easy set of fixtures before the international break.

Currently ranking second for overall points (53) in the midfield category, the South Korean has been severely overlooked owing to Tottenham Hotspur’s inconsistent performances throughout all competitions. Although yet to replicate his remarkable form from previous seasons, Son has already managed to bag two double-digit hauls, registering six goal contributions in the ongoing campaign.

While Spurs remain amongst the clubs yet to find their stride ten weeks into the season, a home encounter against a battered and bruised Manchester United offer them an opportunity to set a precedent heading into a favourable set of fixtures. With Harry Kane beginning to regain his form, Son is likely to benefit from the forward’s rejuvenation heading into the upcoming game weeks. The South-Korean already betters Kane in expected goals (1.93xG) and has been comparatively significant in attack, having created 16 chances to Kane’s three this season.

Facing a United side struggling to keep a clean sheet this season, Son provides the required threat to exploit the visitors’ weaknesses this weekend. Having bagged three goals and an assist against the Red Devils last season, the South-Korean is likely to produce an attacking return on Saturday before an upturn in fixtures next weekend.