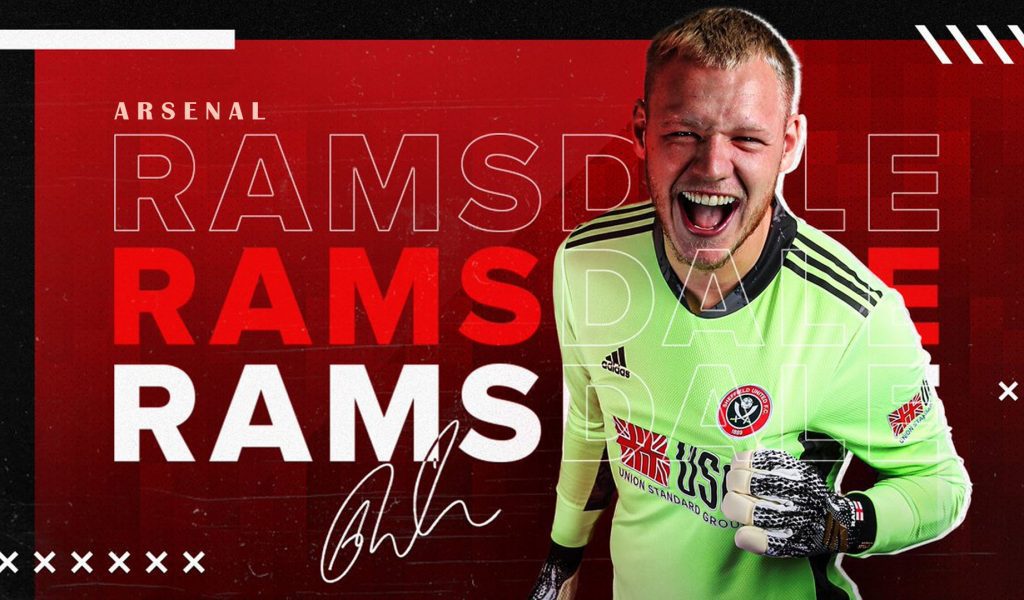 With Arsenal targeting Aaron Ramsdale actively in this market as they look to secure a new No:2, their fans have had mixed reactions to this transfer, especially since it could cost the North London outfit nearly £32 million.

However, Arsenal’s problem is a little different than most clubs. While signing a backup goalkeeper for £32 million is unheard of, Ramsdale could become the club’s starting goalkeeper in less than a season, and his numbers back it up.

Let us divide what he can add to Arsenal into two sectors:

A) Impressive numbers and qualities that justify his £32 million valuation:

While Ramsdale has not played at a top club till now, he is only 23 and a goalkeeper’s professional age comes to an end a little later than an outfield player, which means that Ramsdale solves an issue for more than a decade if Arsenal do decide to sign him for that period.

Now, down to his numbers, which have been impressive for a goalkeeper in a team that arguably had one of the worst top-flight defences in the last decade. Yet, West Brom conceded more goals than Sheffield United despite finishing above them. This is where Aaron Ramsdale comes in.

In terms of positioning, Ramsdale’s confidence in himself helps him in this area. He often stands 3 yards ahead of the goal line (starting position) but maintains a sturdy and slightly crouched position, which in turn allows him to dive either side. The advantage Ramsdale has is that he has quick reflexes, and he backs himself to stop most shots. The aforementioned crouched position also helps Ramsdale jump for the shots that dip, while it also helps him to take a step on either side and put a strong handout. This allowed Ramsdale to have a save percentage of 70.1%, more than Edouard Mendy, David de Gea, Lukasz Fabianski, and Arsenal’s No:1, Bernd Leno.

In terms of parrying the ball, Ramsdale did a brilliant job last season in parrying the ball out wide rather than in the direction of on-rushing forwards. His hands are often a little bent towards either side to allow him to parry the ball as wideout as possible, while he also ensures that he puts a strong hand out because a soft hand would put the ball back into the direction of the opponent, or he could also concede an unforced corner. These are important qualities in any goalkeeper, and Ramsdale has so far done a good job at it.

Ramsdale is also good at sniffing out danger from crosses and prefers handling the ball or punching it out of danger than putting his teammates under the pressure of heading the ball out of danger. Ramsdale successfully stopped 9.4% of crosses inside the box last season, better than any other Premier League goalkeeper.

His best ability, however, is his quality in 1v1’s. Ramsdale, like very few keepers in the current age, is fearless of the ball and does not mind taking one for the team. This bravado, in turn, helps Ramsdale make himself a big figure in 1v1’s while he also ensures that he covers all parts of the goal to a reasonable extent. If a player is through on goal, Ramsdale waits for the opponent to make the first move, thereby putting him under pressure. Ramsdale then stretches his hands out wide and stretches his left/right leg depending on which side the far post is when the opponent is taking the shot. This makes the Englishman a commanding figure in front of the goal, a player Arsenal desperately need between the sticks.

Lastly, his long-range passing is incredible. While a keeper cannot be judged for his pass completion rate because a lot of it depends on the player receiving it, Ramsdale prefers hitting long passes, while he also had 7 shot-creating actions last season, impressive for any keeper. Quite similar to Jordan Pickford, Ramsdale is good at launching the ball out to the forwards during counter-attacks, and if Mikel Arteta decides to play that way in the coming season, Ramsdale will surely be an asset to his side.

B) Qualities Ramsdale can improve to justify his £32 million valuation:

Although Ramsdale, more often than not, positions himself brilliantly, he sometimes wanders 7 yards ahead of his goal-line which allows players who take long shots to dip the ball into the goal or even curve it in. When a keeper stands so far out, he immediately needs to cover a lot more ground than necessary. Last season, some teams did take advantage of this, quite notably Harry Kane, when he scored with a low curved shot against Ramsdale, who was 7 yards in front of the goal-line. While Ramsdale did not make a habit of doing this, it could prove to be crucial when you are playing big games for a big club.

Another area Ramsdale could improve in are his 1v1’s from acute angles. When the opposition player is running in from the wings and is facing an acute angle in front of the goal, Ramsdale performs his primary responsibility of covering up the near post. What he fails to do is charging upon the player with the ball because otherwise, the opponent has a chance of squaring the ball to anybody in the box, which would leave them with a nearly empty net.

While his positives largely outdo his negatives, Ramsdale is yet to prove his worth at a top club or a club that consistently finishes in the top half of the table. However, Premier League clubs have previously plucked out gems from the Championship or from lesser leagues around Europe. Edouard Mendy is a prime example who joined Chelsea from Rennes last season as an incredible shot-stopper. Ramsdale has incredible potential, but he needs to improve on some important qualities before he can start for Arsenal.

Thus, in the most unusual verdict of a transfer, Ramsdale is worth the £32 million Sheffield United are asking for him but he is not necessarily the only option in the market for Arsenal. However, if Arsenal do trust in his qualities, there is a very good chance that Ramsdale can become a top keeper because his underlying numbers and basic qualities are intact and already better, if not equal to Bernd Leno.

He is a player who could become a starter at a top club with the right development, and if Arsenal do sign the Englishman, it could be considered a coup in the future.

Toby Alderweireld closes in on Tottenham Hotspur exit
Will Arsenal solve their creativity conundrum this summer?
To Top