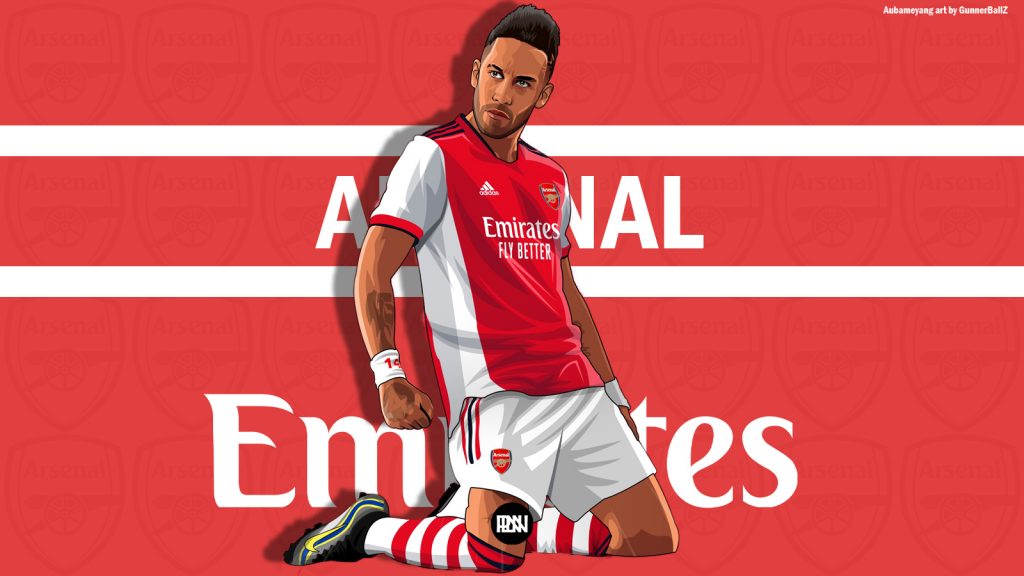 Pierre-Emerick Aubameyang has been associated to goal-scoring at Arsenal as much as that of Alexis Sanchez, Robin van Persie, Nicolas Anelka, and many more. Just like the aforementioned names, Aubameyang has taken up the goal-scoring baton for the Gunners since he moved from Borussia Dortmund. Despite the positional change and personnel change – the Gabonese ace didn’t give up on scoring and was the central figure responsible to put the ball in the net.

The sad thing about playing for Arsenal lately has been the so-called media bias. As soon as the goals dried up – he was under scrutiny for his every touch and every haircut. Yes, a striker’s job is to net goals but there was soo much going on outside the pitch. He suffered from Covid, Malaria, his mother was dearly ill, and of all, he missed the one thing which fuels him the most – the fans. With the supporters back in the stadium there is some mojo around him and the way he walks, talks and goes about himself.

With North London Derby around the corner, the pressure was on the Reds from London to remind their shadowed neighbours that their ego is exceeding their reach – and who better to do that than a certain number fourteen with a knee sliding celebration.

How many times did Aubameyang sneak away from a defender in the box only to end up alone in space and eventually score in his career? A lot. You could even go as far as to say that that’s his trademark move.

Exactly that happened yesterday again. It was the 27th minute when Smith-Rowe went on a run down the touchline after which he found Aubameyang unmarked and alone in the box. A delicate reverse pass into his feet and Auba finished with precision.

It was a goal that embodied the old pure finisher Auba with the new drop-deep centre-forwards of today. He’s not someone known for his technical or dribbling ability but in big spaces, he’s more than able to pick a teammate out with a flick or a pass into space. Short burst run to run away from Sanchez, a flick on to Smith-Rowe and it was game over after that.

So how does someone with elite-level movement suddenly turn into a bad player? He doesn’t. He was always and still is a player who doesn’t amaze you once you take his goals away from him. Although his technical level is probably at the best it’s ever been in his career it’s still not at a high enough level to massively contribute to those around him other than with his goals.

Understandably, people want to find ways to stick a 32-year-old striker with a “finished” label. It’s how the game goes.

He just simply isn’t that. If you were to compare him to a big chunk of his last season games and games from this season, he’s miles better off physically this year. The spring in his step is back, he doesn’t look like a pushover in duels and he’s getting back into a dangerous high xG position in the box.

2 in 5 this season isn’t breathtaking output by no means but it’s still 40% of Arsenal’s goals in the league. He did however grab a hattrick in the Carabao Cup.

One thing draws another. When Auba’s at his best physically, the rest follows.

BACK IN THE CENTRE

He doesn’t have the burden of tracking the opposition fullback when he’s playing in the centre, the wing position is a thing of the past and Arteta realizes that. Although he did find joy as a striker out wide at the start of Arteta’s tenure, eventually it became too much to the point where he’d spend games chasing his marker and away from goal. He’s in a role where he keeps his best pressing starting position (just off the left in a two-up top) but not to the point where he tracks back deep into his own half. He’s got a real pressing partner in Martin Ødegaard now and they understand each other well.

With Emile Smith-Rowe and Ødegaard, Aubameyang has options. With Saka/Tierney and Pepe on the wings, Arsenal looks too easy to read and Auba’s movement is limited. This is by far Arsenal’s best attacking system under Arteta and provides the most for technical players between lines as well as Aubameyang. 4-3-3 is too advanced for Arsenal at the moment and balance issues occur. Arsenal not only have a great balance in terms of profiles but the connections in this system too.

He’s surrounded by young and exciting talents with technicians in abundance. That’s what he’s used to having and what he needs to thrive. This Arsenal team has shown what they can offer to him. Saka, Smith-Rowe, and Ødegaard in the halfspaces with Tierney on the crossing duty. A strong pivot in Xhaka-Partey who are able to recycle and win 2nd balls with ease. The backline looks assured and comfortable in the high line.

The fundamentals are set. Let’s see what the ceiling of Auba with talented youngsters and technically capable players around him really is now.