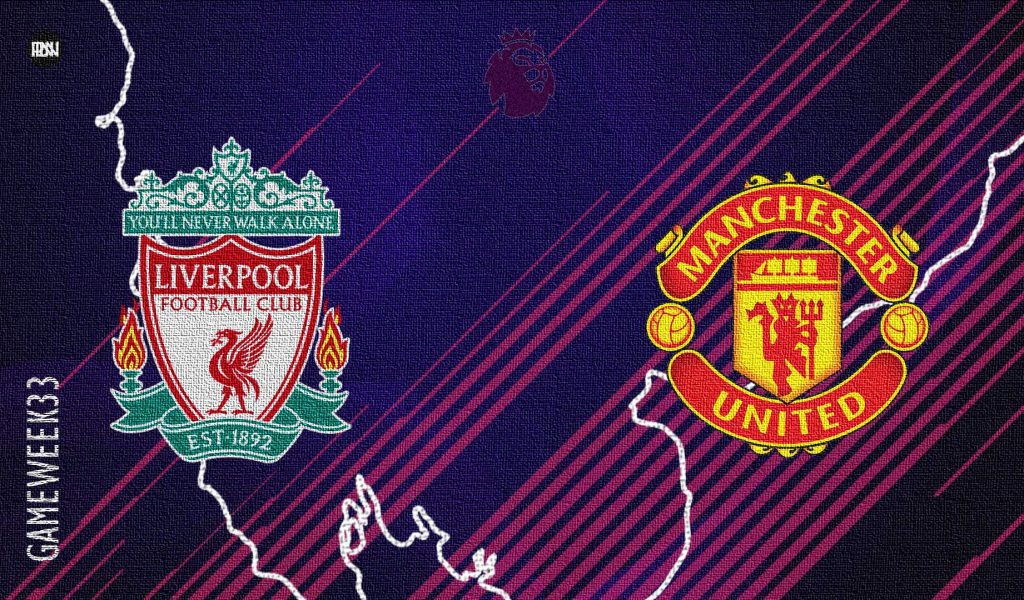 One of the fiercest and most eagerly awaited fixture. It is the North West Derby between bitter historical rivals Liverpool and Manchester United.

The Red Devils and the Reds will go head-to-head against each other for the second time, this season, at Anfield on Tuesday. The last time these two historic rivals met each other, it was a clean sweep from the Merseysiders with a clear 5-0 victory at the theatre of dreams- the Old Trafford- courtesy to an amazing Mo Salah hattrick.

In what was one of the last games in-charge of, then manager Ole Gunnar Solskjær, United succumbed to their own mistakes handing their bitter rivals an emphatic victory over them. Many will hope for another thriller to unfold at Anfield, while the travelling fans would be going all the way to their rivals’ den with just a hope that a new manager at the helm could mean new results.

Meanwhile, the Kopites would just expect it to be another formality after the last match’s result, where they beat the Cityzens 3-2 to go through to the finals of the FA Cup, this season.

Since the last time they met, a lot has changed. For starters, Liverpool have been beyond phenomenal in the recent few weeks, challenging City neck-to-neck in the title race. As for United they, themselves, have got a new man on the wheel in Ralf Rangnick. Although his appointment till the end of this season, sparked a whole lot of debate, I do not think United have been able to cope up with the scars that were already put since the start of the season.

Meanwhile, Klopp and Ralf’s relation go back to their time back in Germany- that was the time when, comparatively, less experienced Jurgen Norbert Klopp used to see Ralf Rangnick’s model. Despite how many times they have faced each other, both of them did not lose respect in any sense. Even during the press conferences leading up to the game, Ralf was all praises for Klopp and vice-versa.

Ralf Rangnick on what Jurgen Klopp has done @LFC: “He is one of the best, if not the best coach. It is no coincidence what has happened. They brought in the right players and got rid of the right players. That is why they are where they are.”

It will, surely, be not so much of a convincing victory for the home side this time around, but they would still go in with confidence. While the Red Devil will travel all the way to Merseyside and will look to put up a fight, to not just satisfy the rivalry needs, but also to solidify their position in the league to play the UCL next season.

The United defence will have nightmares on the pitch, every time they will come up face-to-face with the pressure of the in-genius of Mohamed Salah.

Although, the Egyptian has not been the same after his return from the World Cup qualifiers, but for how long can you expect a player of Salah’s calibre to produce these dry spells?! The home fans will get behind their best player in the world and will hope that the Egyptian could at least deliver a similar performance, if not exactly the same.

Salah’s nimble footwork and composed finishing, so far, has already left the world of football in awe. It is only a matter of time before we see Mo Salah back. Meanwhile, Klopp that it’s United again- their arch-rivals against whom Mo breaks the drought.

It is hardly possible to not talk about Cristiano Ronaldo when you are talking about Manchester United’s fixtures.

To many, he is a demigod, work machine, and GOAT (Greatest of All-Time). While also being a super athlete, hard worker, match winner, game-changer, hard worker and what not. Arguably, it is Man United’s loophole of the season that their best player on the pitch is a 37-year-old, where they should have been planning on the future project at the Old Trafford.

But for Ronaldo, it is all so easy. The 37-year-old homeboy has already scored two hattricks in the Premier League this season, the recent one coming in the last game against Norwich. He has been key to keeping United’s hope alive this season, and yet again the travelling fans will hope that another Cristiano Ronaldo masterclass is loading at the Anfield.

Liverpool have had a full squad at its disposal, for a long time now. Even though Jota caught a knock, the Portuguese shrugged it off to come on as the substitute in the FA Cup win over Manchester City.

Other than this, Jurgen Klopp does not have injury issues, just an issue or two here and there as to how to set up the team, without exerting many players and also giving all of them the opportunity.

Meanwhile, Ralf Rangnick has some injuries to address. In contrast to their hosts, United are down to a depleted midfield with Fred and McTominay both out due to injuries. Including Cavani and Shaw, who remains out due to their reasons.

Recent news are coming up that Bruno Fernandes was involved in a car accident, with the pictures of his cars showing. But, it was confirmed that he did not sustain any injuries and could well start the all but important game for his side.

– Leanne Kiernan: The story of a farmer’s child turned Liverpool superstar
– Can Jurgen Klopp march his men to win quadruple this season?
– James Garner’s Nottingham Forest form is deserving of a Manchester United spot next season
– What will Erik ten Hag bring to Manchester United?