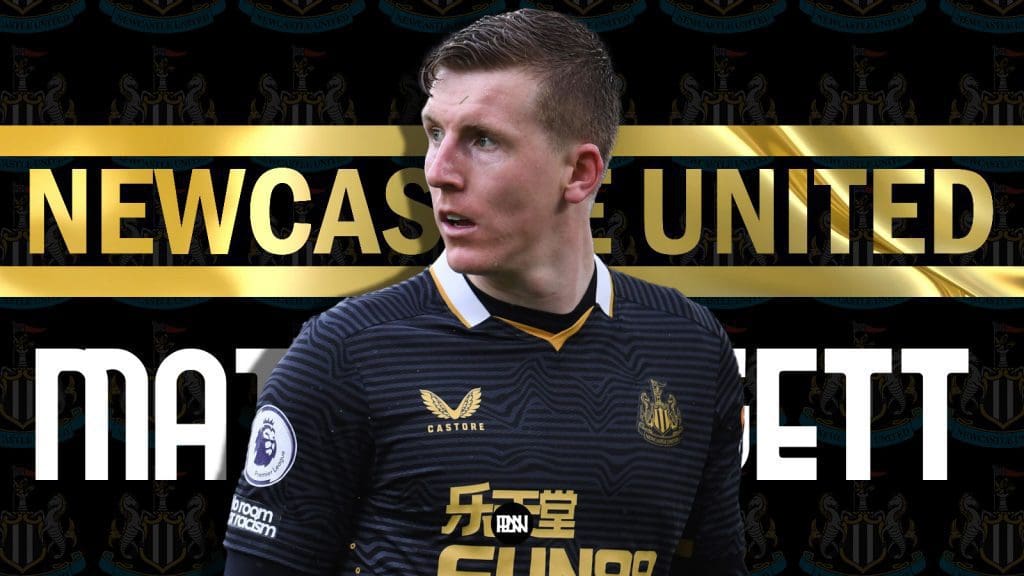 Matt Targett has been an exceptional addition to Eddie Howe’s Newcastle United, helping the Toons climb off the relegation fracas and finish eleventh in the Premier League. He has been one of those first names on the team-sheet guys at St. James Park, playing every minute of the sixteen games he was available for and Newcastle are said to have a £15million option to buy Targett.

But any decision regarding his permanent move upon the Tyne is yet to be made with Eddie Howe giving a non-conclusive answer when he was asked about Matt Targett’s future at Newcastle United. This is what Howe said when he was asked about whether Matt is moving up to Newcastle: “I think it’s difficult one to give you any direction on that in respect to his club. We’ll wait and see.”

Although Eddie did dictate how integral Matt has been for Newcastle since his loan move: “He’s been outstanding. I think the biggest compliment I can pay to any loan player is, for me, I view him as an integral member of the squad. His attitude, conduct, performances and consistency have been at the highest level. We really, really like him. He’s gelled with the squad.”

While Howe and Newcastle are contemplating whether to make his services permanent, Targett has been quite open about his desire to stay at St. James’ Park and build on the project that the club has undertaken with Eddie Howe. Targett speaking after Newcastle’s much-appreciated 2-0 win over Arsenal the other week in what was Newcastle’s last home game in an eventful campaign, “I think everyone knows what I want but it’s up to the club. It’s a massive project, an exciting project. I’m sure everyone wants to be a part of it. I’ve loved every single minute of it. It’s been an incredible place to play my football.”

Now, interestingly Steven Gerrard has also expressed that he won’t mind having Matt as an option next season – although confirming that everything lies in Newcastle’s hands at the moment: “He’s an Aston Villa player until different so, if he comes back in here in pre-season and he’s available for us, great, because I’ve got two top full-backs. That’s a great position to be in as a manager. I think the decision is going to be Newcastle’s at the end of the day. I haven’t spoke to Eddie on it. It seems like it’s been a positive loan for Matty, from a personal point of view. But, if you ask me, I’d welcome him back no problem because it’ll mean I’ll have two top left-backs!”

Matt Targett: A target to multiple clubs in Premiership

While Newcastle United are still pondering on whether Matt will be the man to take them forward, they retain their links with Atletico Madrid star Renan Lodi – who will come as a hefty kick on the bank though. Likes of Fulham, Leeds United and Leicester City have also established Matt Targett as a potential man they can bring to fill in their left-back spot.

For Fulham, they target to strengthen their squad after gaining promotion in an exceptional manner under Marco Silva – they have already made it public that they have learned from the past and will be building up in steps rather than going on a spending spree aggregating to nothing as Marco Silva & Fulham look to get above the yo-yo tag established in the recent past. Antonee Robinson has been performing really well in the Championship, although having not featured in the Premier League before – his position will be one where Silva would be looking to bring in a fresh face to not only cover but also give him that time and space to get into the first division pace.

Moving onto Leeds United, the Lilywhites have had major defensive problems in the recently concluded season – conceding the highest goals in the League. Sticking to the left-back, in particular, Junior Firpo has been struggling to adapt to life in England and has been on the end of multiple adolescent plays – not only giving off the ball in the process but also ending with Leeds conceding a goal at times. It’s one of those vital positions that Jesse Marsch has to resolve going into the summer window and Matt Targett could prove to be an excellent addition to Leeds’ way of doing things – if he were to make a move to Elland Road.

Following up to Leicester City, Brendan Rodgers has had quite some problems to deal with and left-back/left-wingback has been one of those positions where they struggled to settle on a face. With Timothy Castagne and James Justin getting patched-up on the injury-table for about all season – Luke Thomas has seen a fair share (22 games) of time getting used to men’s ball. Nothing to take away from young Luke, who has time and time again shown glimpses of excellency – especially going ahead. Yet they need someone on that left-back to make it easier for Thomas to ease into his strides in the first team while dealing with injury problems that they cannot seem to get away from.

Matt Targett has shown that he can be one solution to multiple problems profuse clubs face in the Premier League, and judging by his recent performances for Newcastle United – they will surely be giving a think to take him on a permanent deal rather than getting in an expensive option. And for Matt, he is ending up at Newcastle, Aston Villa, or atleast another mid-table club in the Premier League this summer – it just needs to be seen where and we will get more about this as the season progress.

I believe Newcastle United will snap him up, on a bargain deal, though!