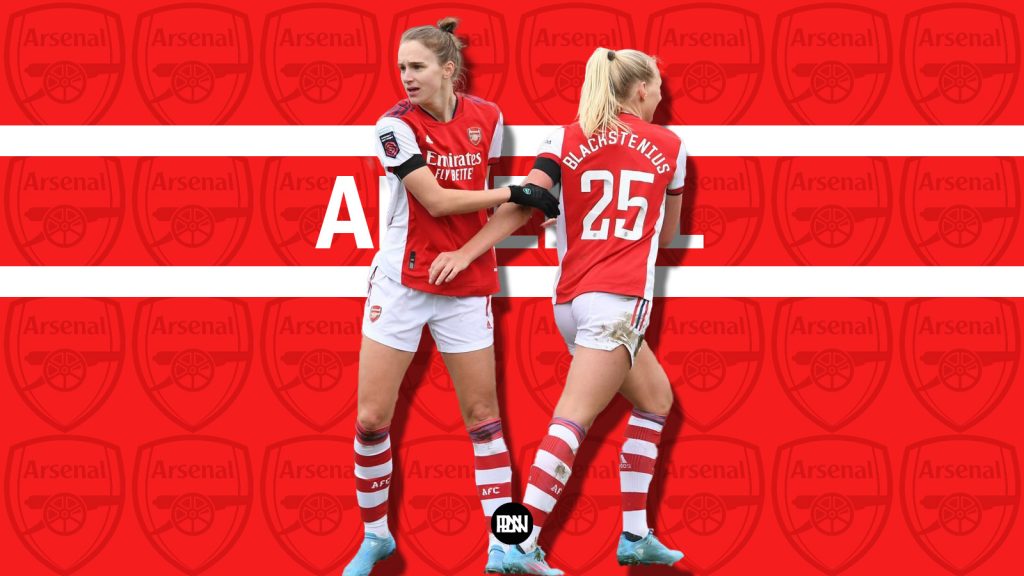 Who is Vivianne Miedema? – Viv Miedema is a professional footballer who plays for Arsenal as a striker (if you ask an Arsenal fan, many of them would suggest her being Thierry Henry’s regen in Women’s ball). However, for the last two months, Miedema has been playing in a lone (or sometimes even dual) position as a number 10. So, let’s dive into the mind of Jonas Eidevall, and figure out why he decided on this method and, more importantly, is this inventive change bringing points home to Meadow Park?

THE CONTEXT BEHIND THE CHANGE – ARSENAL

Arsenal have been gunning for another league title for a while now, with their last one coming 4 seasons ago, when they pipped Manchester City to the title by 7 points in 2018/19. However, it could be argued by many that this ambition had only started to be matched financially this season, with the Gunners buying big-name players, such as former all-time leading WSL goalscorer Nikita Parris, World Cup winner Mana Iwabuchi, two time World Cup winner Tobin Heath, two-time Damallsvenskan winner Stina Blackstenius as well as many others.

But even after all this investment, Arsenal were only 2 points clear of Chelsea, and the two were meeting in February, a game which could be a catalyst in deciding where the coveted title would be heading. Since they’d met at the start of the season, Chelsea had gone on a 7 game unbeaten run and had only lost 1 game all season. So, Jonas Eidevall decided that he had to take a gamble to try and overcome Chelsea’s depth and world-class quality. How did he come to the conclusion that it was Miedema in midfield? Let’s have a look.

WHY MIEDEMA? AND WHY IN MIDFIELD?

Vivianne Miedema isn’t a striker. She plays everywhere. What I mean by that is that she crosses, shoots from distance, has clinical striking chances, sets up teammates, recovers the ball in the middle and runs back to defend. A brilliant example of this is her performance in Arsenal’s 9-1 victory over West Ham last season. Her finishing is only an aspect of her game, so to reduce her to just a finisher is just sheer lunacy. Miedema does it all on a pitch.

I believe that it is also worth mentioning that Miedema did briefly play as a number 10 for VV De Weide as a youth player, however that was over 10 years ago, so her experience in the position wouldn’t have been fresh, to put it lightly. This may have influenced Jonas’ decision, however, I doubt it would have been the main factor.

So when there’s crowding in the forward areas, it makes sense for Vivianne Miedema to drop into a different position, as Arsenal don’t play with 2 strikers (something I discussed in a previous article about whether we would see Blackstenius and Miedema together). It seems like out of the options discussed in that article, Eidevall has opted for bringing Miedema to the bench, which has reduced Mana Iwabuchi to less than 500 minutes this season and has left Jordan Nobbs starting only 28% of league matches, compared to 55% last season. But has this new decision paid off for Arsenal?

Chelsea and Reading were the first teams Arsenal played in their experiment of Vivianne Miedema operating in the middle of the pitch. The Chelsea match was a success for the Gunners despite them drawing, as they remained two points ahead of the Blues. The Gunners only had two shots, with Miedema not being able to have her joy in front of the goal. However this was a difficult match, and the majority of people weren’t expecting Miedema to score like she did against Bristol City or Aston Villa, as this was more about keeping Chelsea at bay.

Reading was the first match which Arsenal were expected to comfortably win, and so many were surprised when Jonas decided to stick with the new tactical setup. Arsenal ended up with a victory, leaving the pitch with a clean sheet and 4 goals to their name. Miedema did end up scoring the opening goal for the Gunners, as the ball is played to her in between the lines, she drags 3 players towards her (leaving one of them for dust on the floor), lays it off to Blackstenius, who gives the ball back to her after a deflection, and she finishes it off from a winger esque position by standing close to the near post and placing it in the far one.

That wasn’t her only contribution in the game, however, as she picked the ball up in a brilliant position, drove into the box, and deceives Gemma Evans by placing herself in a shooting position which makes the Reading defender close her down, only for Miedema to square the ball to Blackstenius, who puts away a simple 1v1 chance.

Those two games are very telling of Miedema’s journey in midfield so far. In one instance, she can get completely left out of a game as she now has more opposition players near her, which means that her decision making has to be pinpoint, and she has to be the one helping others to find the space. But when things are right, which is more often than not for a player of her calibre, when she has the opportunity to make runs and has that space, she’s one of the most deadly players you’ll ever see. As Vivianne puts it herself, “I’m never going to be someone who’s the fastest or who picks up the ball and dribbles past everyone from midfield, all my positioning comes from me reading the game and seeing the game properly. I’m instinctive.”

After Miedema scored 6 for the Netherlands against Cyprus, it’s clear that that goalscoring knack is still there when she plays as a lone 9 with supporting wingers like Beerensteyn and Pelova, and with world-class creators like Roord, Spitse and Groenen she can still play that role that she played seasons ago for Arsenal, and if that means she seeks a move where she can play that role more frequently, then so be it. However, that’s something to be discussed another day.