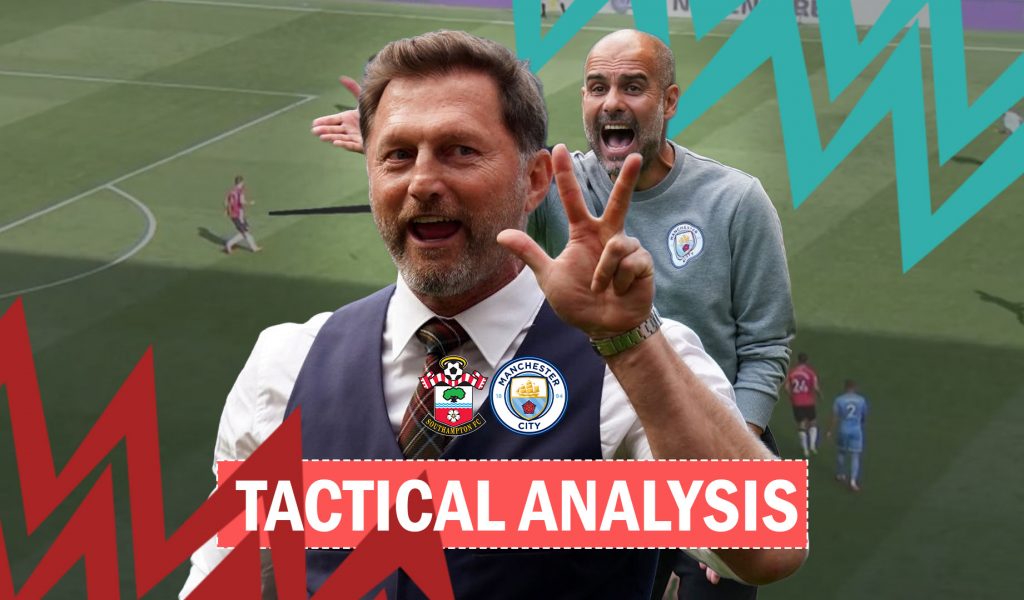 Pep Guardiola and Manchester City were left frustrated after the dire 0-0 draw against Southampton at the Etihad Stadium. In many ways, the result was a fair indication of the game as City lacked their usual essence. Meanwhile, Ralph Hasenhüttl would have been very proud of the way Southampton performed as they did not just sit back but pressed City high and created some decent opportunities themselves and restricted the Premier League Champions to just one shot on target.

Manchester City started with Nathan Ake at the back with both Aymeric Laporte and John Stones injured with Fernandinho replacing Rodri in midfield. Southampton started in a 4-4-2 shape with Adam Armstrong and Che Adams starting upfront.

Southampton’s pressing and their ability to restrict Manchester City was the talk after the game and rightfully so. Hasenhüttl was brave in his strategy as he tried to press City very high up the pitch and it worked. Pep Guardiola was left bemused for solutions as he discussed this in his post-match press conference. Asked about why his team struggled to create chances he answered:

“(Man City) We struggled with build-up, not precise, not good. We lost more balls than usual. We had the feeling we weren’t comfortable taking the ball. We couldn’t make contact with people upfront, but we had chances and at the end, a draw is a fair result.”

City started in their regular 4-3-3 formation which shifted to a 2-3-5 shape on the ball with both the fullbacks (Walker and Cancelo) inverting. Gabriel Jesus and Jack Grealish remained wide providing width. Hasenhüttl approached City in a 4-4-2 shape off the ball with both the wide players (Redmond and Elyounoussi) much narrower to cover City’s inverted fullbacks.

Let’s look at the way Southampton pressed City which made them struggle to create meaningful chances – In the first phase of play, Adam Armstrong (No.9) presses Ederson high up the pitch as well as using his cover shadow to take the option of Dias out of the picture for the goalkeeper. Meanwhile, Che Adams marks Fernandinho, therefore, blocking any central progression. 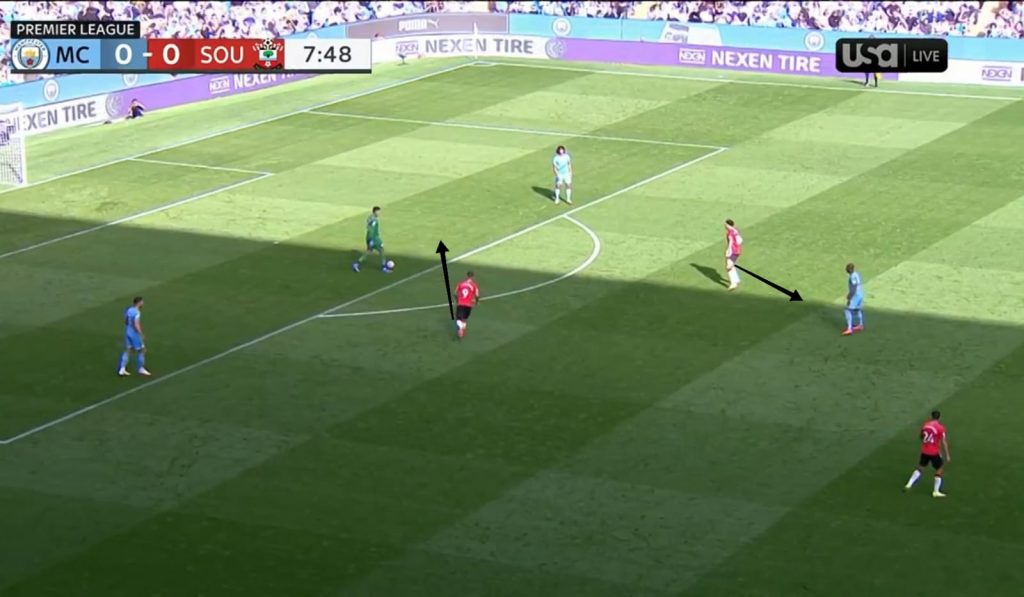 Now Ederson having no other option passes the ball to Ake and it is a trigger for Che Adams to press him while using his cover shadow to mark Fernandinho so that he is taken out of the game. Hence his only option is to pass the ball back to the goalkeeper Ederson. Southampton have blocked the passing option forward for the centre-backs as well as stopping the central progression through Fernandinho. 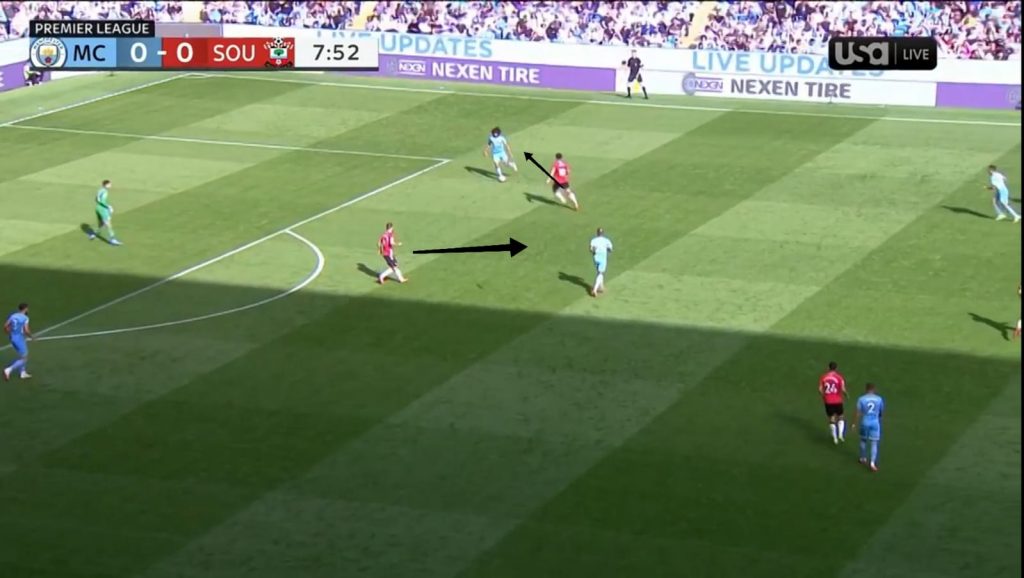 On to the second phase of play when Ruben Dias or Nathan Ake tried to play a pass forward – up stepped James Ward Prowse or Oriol Romeu, Southampton’s central midfielders. Here Dias passes centrally to Walker who is inverted and Ward Prowse quickly latches on to the loose pass before moving it to Redmond for a counter-attack. When one of the central midfielders pressed high up the pitch, the other (Romeu here) stayed back to protect the space. 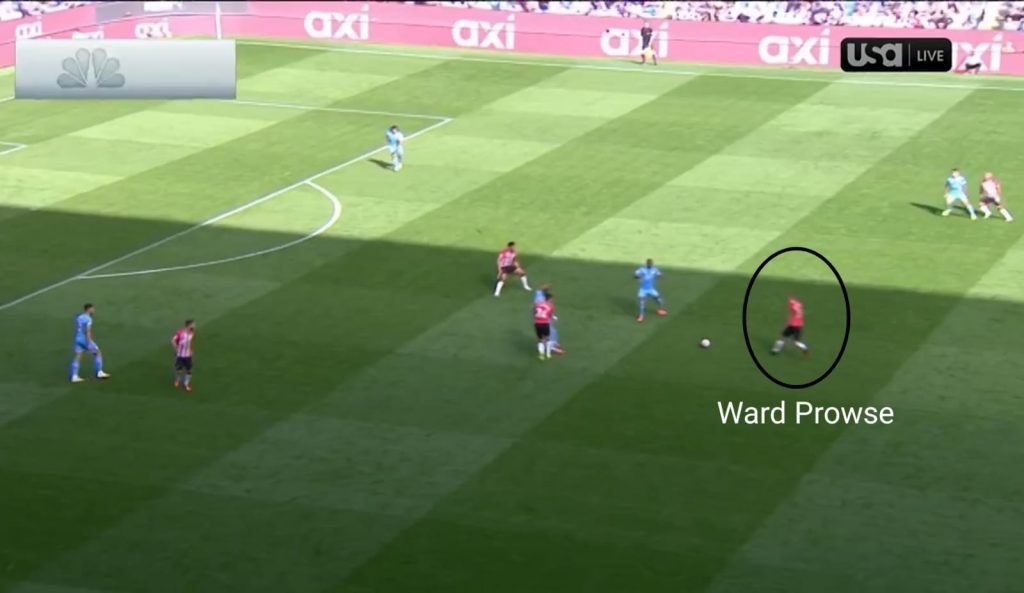 Manchester City’s centre-backs were forced to pass the ball wide especially throughout the first half since their opponents shut down any space through the middle. Whenever Jesus (right-winger) received the ball – Southampton players doubled up on him and were quick to close down the space and win the ball which ultimately led to many counter-attacking situations. City’s central midfielders or the number 8s (Bernardo Silva and Ilkay Gundogan) are usually high up the pitch allowing the wingers to be wide and fullbacks to invert. Southampton’s centre halves marking the central midfielders were also quick to jump on to them whenever they received the ball in space. 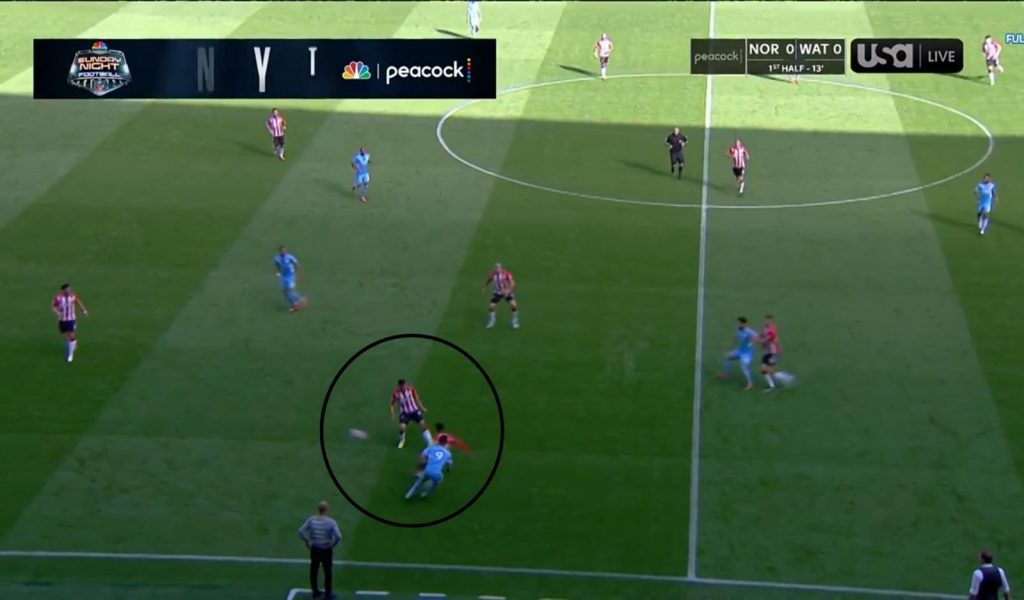 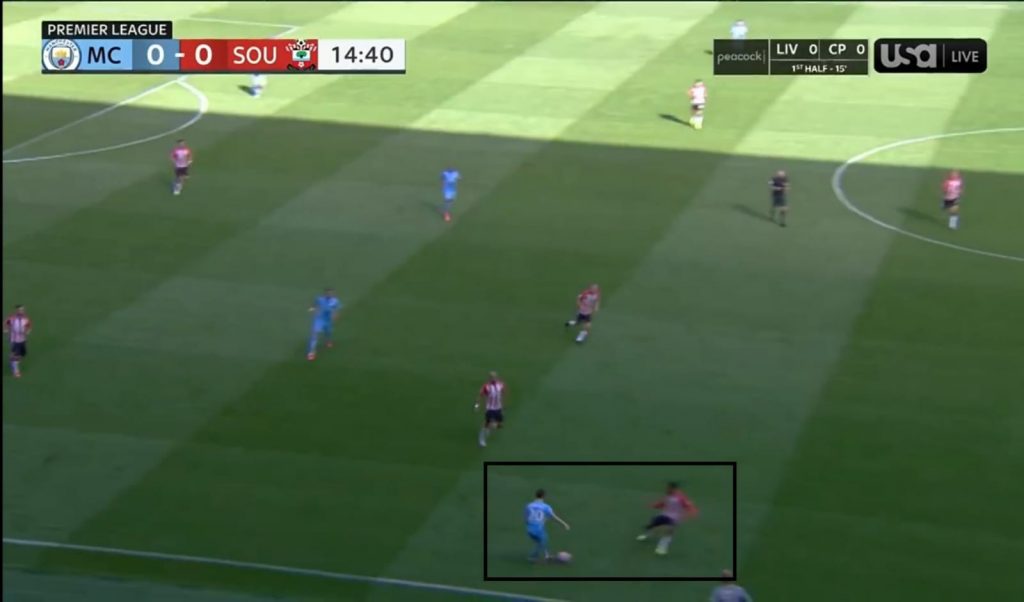 Southampton started the second half very brightly by once again pressing City high up the pitch and regularly won duels, second balls which led to transitions. Pep Guardiola could not find any solution as he watched his team struggle to build out from the back, something his City team do so well which usually leaves the opponent bamboozled.

The Saints could have gone ahead had the referee Jonathan Moss awarded the spot kick. The move that led to the penalty started when Walker was out of options as Ward Prowse and Oriol Romeu marked City’s midfielders tightly. Walker waits and ultimately Redmond pounces on him which led to Adam Armstrong being brought down in the box.

There was a sequence in the 67th minute that exactly showed how Southampton cramped Manchester City. Gundogan receives the ball from the centre-back and there was James Ward Prowse immediately on to him not allowing him to turn and pick out a pass. While Ward Prowse pressed high up the pitch, Oriol Romeu remained back. 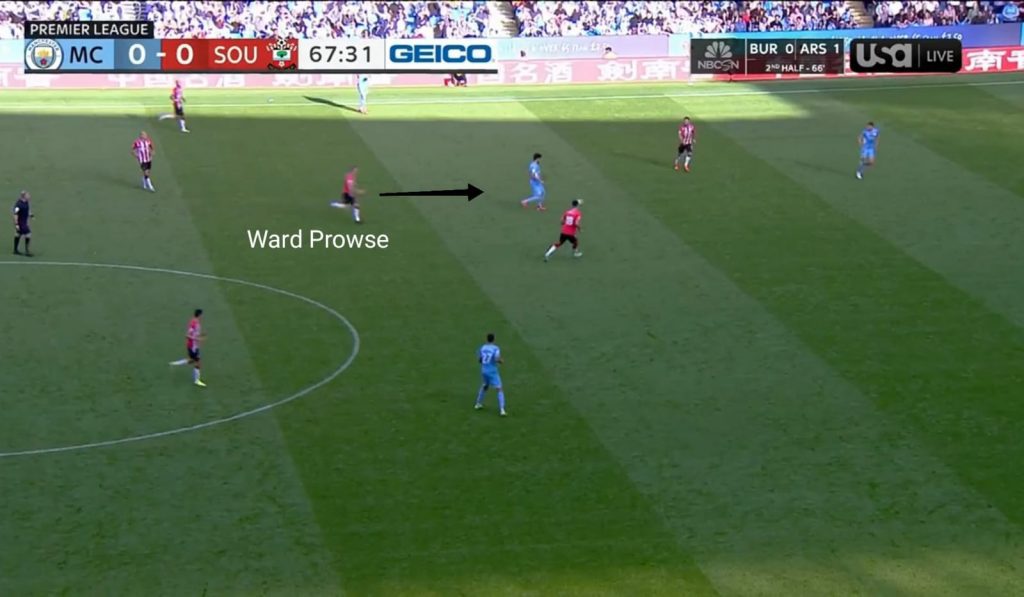 Gundogan’s only option remains a back pass to the other centre-back. Nathan Ake is immediately pressured by Broja (replaced Che Adams) and his options are limited with Elyounoussi marking the inverted full-back Cancelo. Ake moves it forward to Bernardo Silva, City’s central midfielder who is high up the pitch but Bednarek quickly closes down the space and wins the ball back. Southampton won the ball in midfield on many occasions and they did what City do so well to other teams. 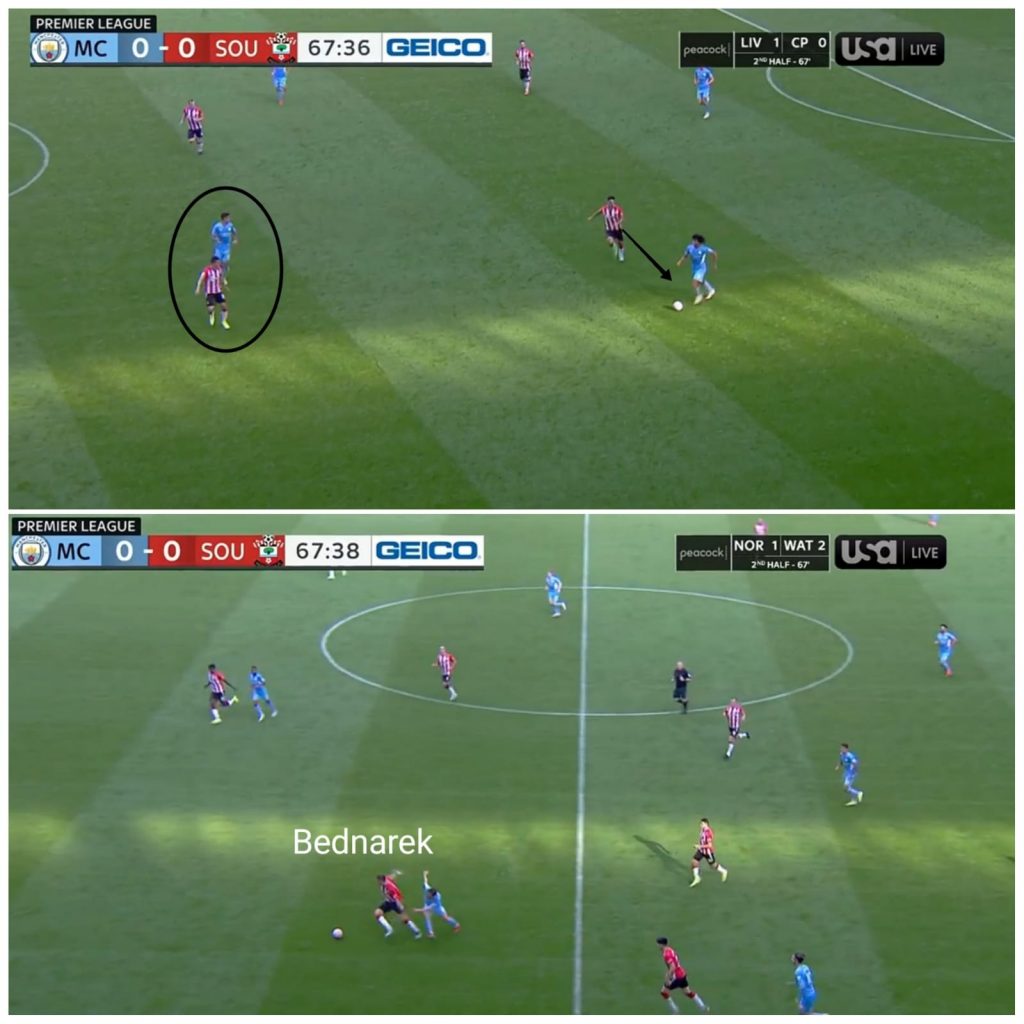 Manchester City being one of the best teams to play out of a press did find situations where they could have exploited Southampton in both halves. City won the ball in midfield on a couple of occasions and when they did Southampton’s centre-backs were split wide which allowed Sterling (striker) a huge amount of space to hold up the play and wait for support or run himself into the space but City were not ruthless enough.

Fernandinho who started in defensive midfield ahead of Rodri struggled throughout the game. He was sloppy with his passes and lost so many duels and as a result, Pep substituted him. Bernardo Silva was marked by one of Southampton centre half (Bednarek) and he got close to him whenever the City midfielder received the ball. Here Gundogan finds a pass to Silva and Bednarek is attracted to him which leaves space behind the centre-backs and the Southampton defender is out of position. 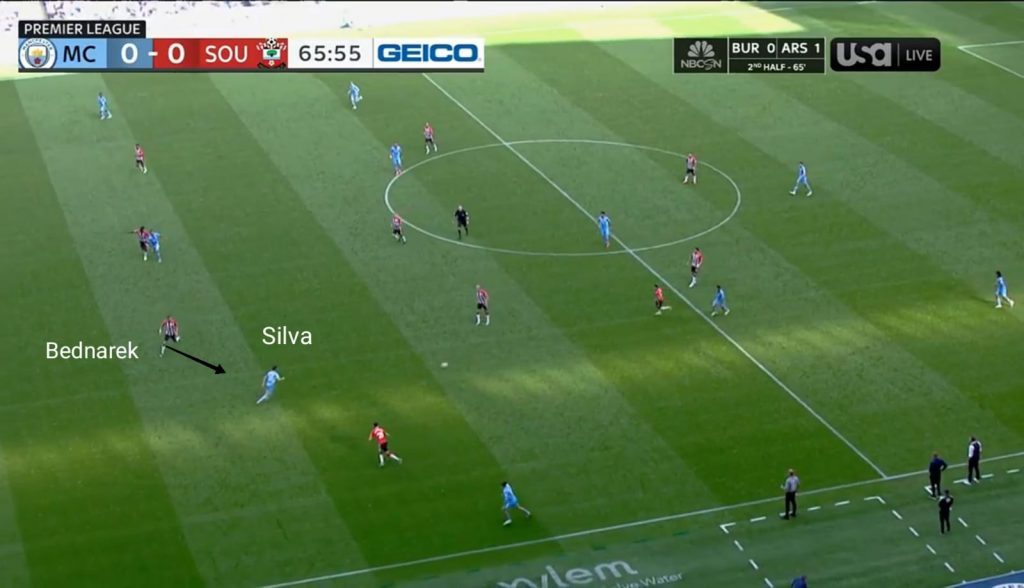 Grealish recieves the ball wide and is in a 1v1 situation but City doesn’t have enough players in the box. These are the type of situations that the Premier League Champions usually thrive in, but against Southampton, they failed to make use of it. (Maybe a striker could have helped) 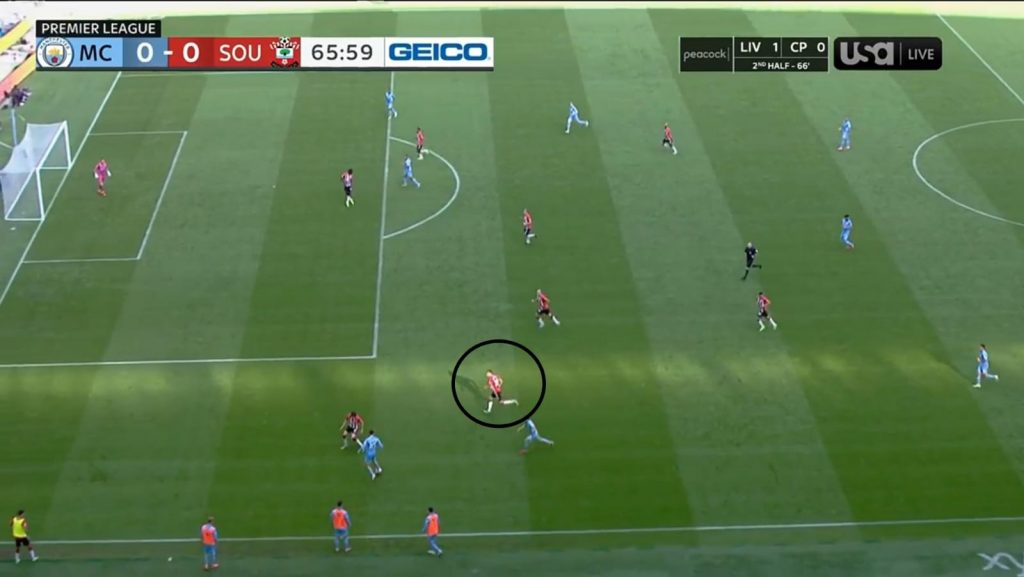 Overall it was a lacklustre performance by Manchester City and two dropped points against the Saints does not look good for what looks to be an exciting and high-quality title race. City struggled with the build-up as they missed both Aymeric Laporte and John Stones who are both very good with the ball at their feet. But credit has to be given to Southampton and Ralph Hasenhüttl for their courageous strategy.

In the post-match press conference, the Southampton boss cited that he learnt from RB Leipzig who similarly approached City in the midweek Champions League game. Manchester City plays Wycombe in the Carabao Cup on Tuesday followed by two huge fixtures in the Premier League against Chelsea and Liverpool which could be pivotal games for their title aspirations. With the fixtures coming thick and fast they will need to improve their game big time.

Wolves vs Tottenham Hotspur: Match Preview | Carabao Cup 2021/22
Charlie Patino: The Rolls-Royce midfielder Arsenal have been brewing in their ranks
To Top