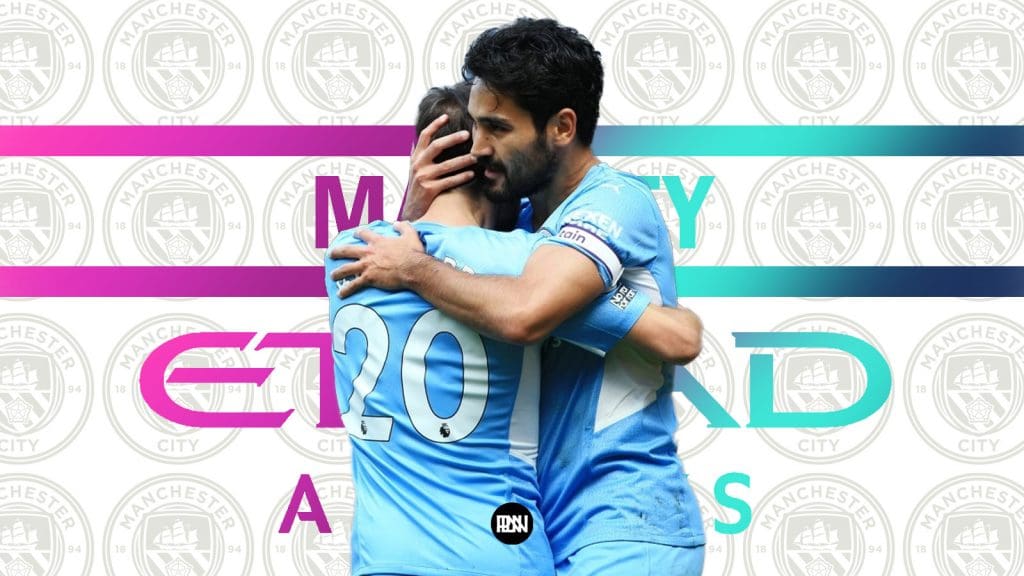 Manchester City bounced back from the defeat against Spurs by thrashing Norwich and Arsenal – and two players were very influential in these results. When this duo have started in central midfield (since last season) – City have won 22 of their 23 games, with the sole defeat coming at the Amex Stadium against Brighton in May when Joao Cancelo was sent off early in the game. Surprisingly, Kevin De Bruyne is not one of them.

The two central midfielders (number 8s) are – Bernardo Silva and Ilkay Gundogan. Bernardo, whose days as a Manchester City player were numbered when he decided to move, back in May. Eventually, the Portuguese midfielder decided to stay in Manchester for another season much to the delight of the City fans. Gundogan, Pep Guardiola’s first signing as a Manchester City manager, coming into the side on the back of his highest goal-scoring season.

Last season, City ran away with the league and reached the Champions League final for the first time in their history – both Silva and Gundogan were at the center of it (literally), hustling across the midfield, maintaining the team’s structure and scoring crucial goals which made this City side very difficult to beat.

First, let’s focus on the German midfielder Ilkay Gundogan – Going back in time to December 16th 2020 when City hosted West Bromwich Albion at the Etihad Stadium, Guardiola made Joao Cancelo invert from a fullback position to form a double pivot with Rodri which allowed Ilkay Gundogan an opportunity to bomb forward into the final third. Since then the tides turned in favor of Pep Guardiola’s men and Gundogan himself, who started scoring frequently.

The timing of Gundogan’s runs and his movements in the attacking third is pretty much the reason for the number of goals he has scored. His ability to make blindside runs or say runs in behind the shoulder of a defender especially from midfield makes it very difficult for the center backs to keep track of him. This is a type of run you usually see from a winger or a striker. 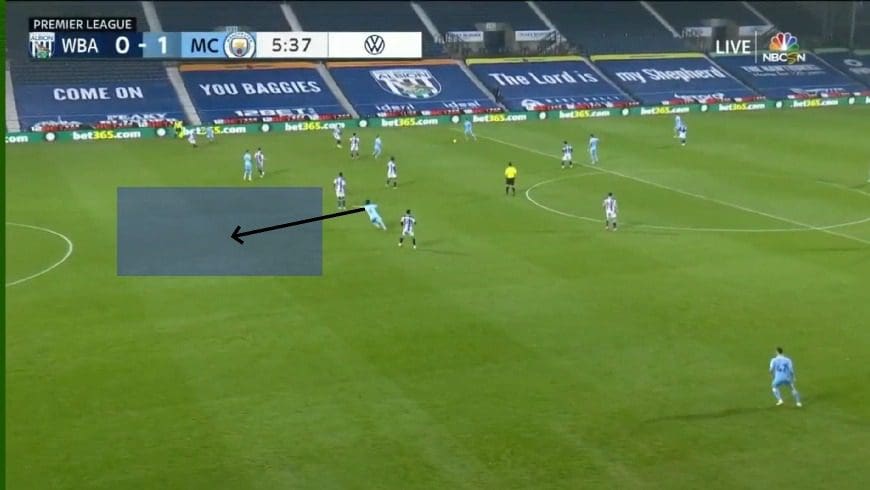 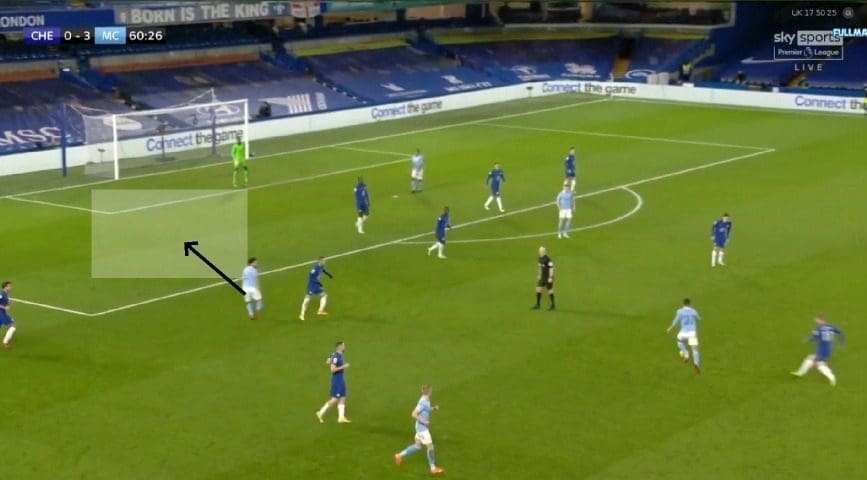 City’s players overload the wide areas and the player in possession usually cuts back across with three to four players waiting in the box to pounce – a regular pattern of play for Manchester City under Pep Guardiola, and Gundogan seems to have this knack of arriving at the right place in the right time. Below are some examples of this: 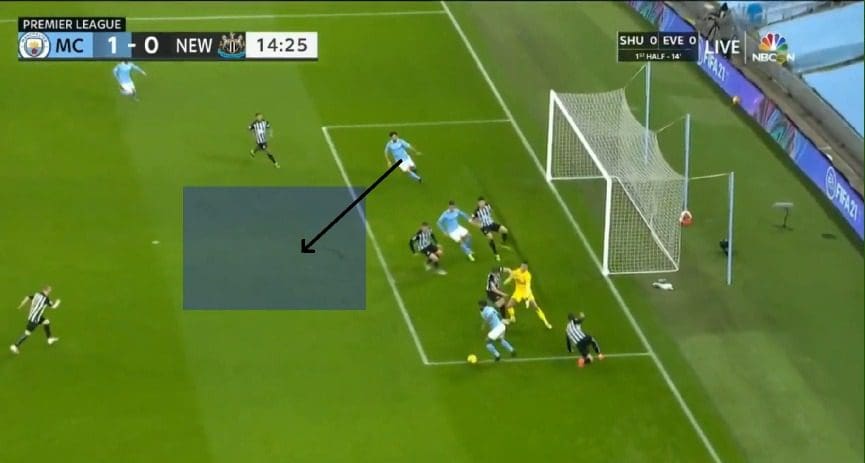 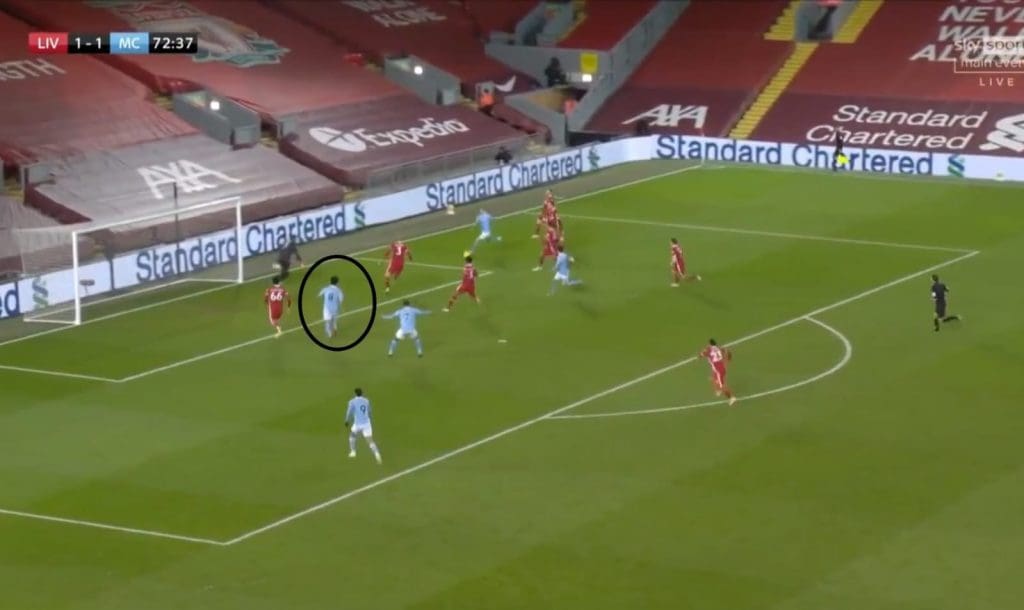 In the final stages of the season, Pep once again tweaked Gundogan’s position. The free-scoring stopped since he was instructed to play deeper in a double pivot with Rodri,  in turn allowing the recipient of the PFA Young Player of the Year award – Phil Foden to advance in the central areas of the pitch.  In the Champions League final, Pep even made Gundogan play as a defensive midfielder, a position he hasn’t played since 2019.

This not only shows Gundogan’s ability to be versatile, but it also says that he puts his team ahead of himself and is ready to act as a sacrificial lamb so that the others in front of him can thrive.

Now on to Bernardo Silva, arguably the backbone of the team. The Portuguese midfielder had a stellar 2018/19 season when Kevin De Bruyne was regularly facing muscle injuries. He finished in the top 10 of the Ballon d’Or rankings and won five out of the six available trophies for both club and country that season, winning the Manchester City player of the year in the process.

Fast forward to the 2020/21 season, he was out of the starting XI and struggled to earn a regular spot at the start of the season; a couple of months later he became a crucial player who was undroppable and made the right central midfield role his own. Even one of the world’s best midfielders – Kevin De Bruyne, could not displace his position, a testament to Silva’s form and his ability.

Bernardo Silva flourishes in the art of finding space, not only for himself but for others as well. It is something that stats won’t tell you and the general audience of the game often don’t notice. The sequence below against Arsenal sums up Bernardo Silva under Pep Guardiola and how he is so influential to the way City play.

Arsenal matched City’s players with Rodri marked and the two forwards ready to press City’s centre-backs when the ball is played by Ederson.  Silva drops deeper to create an option for the goalkeeper, which drags his marker (Emile Smith Rowe) and Arsenal looks like they are ready to counter-press on Silva. That is where his ability to withstand pressure and hold the ball comes into play. He attracts the opponent which creates space for his teammates. 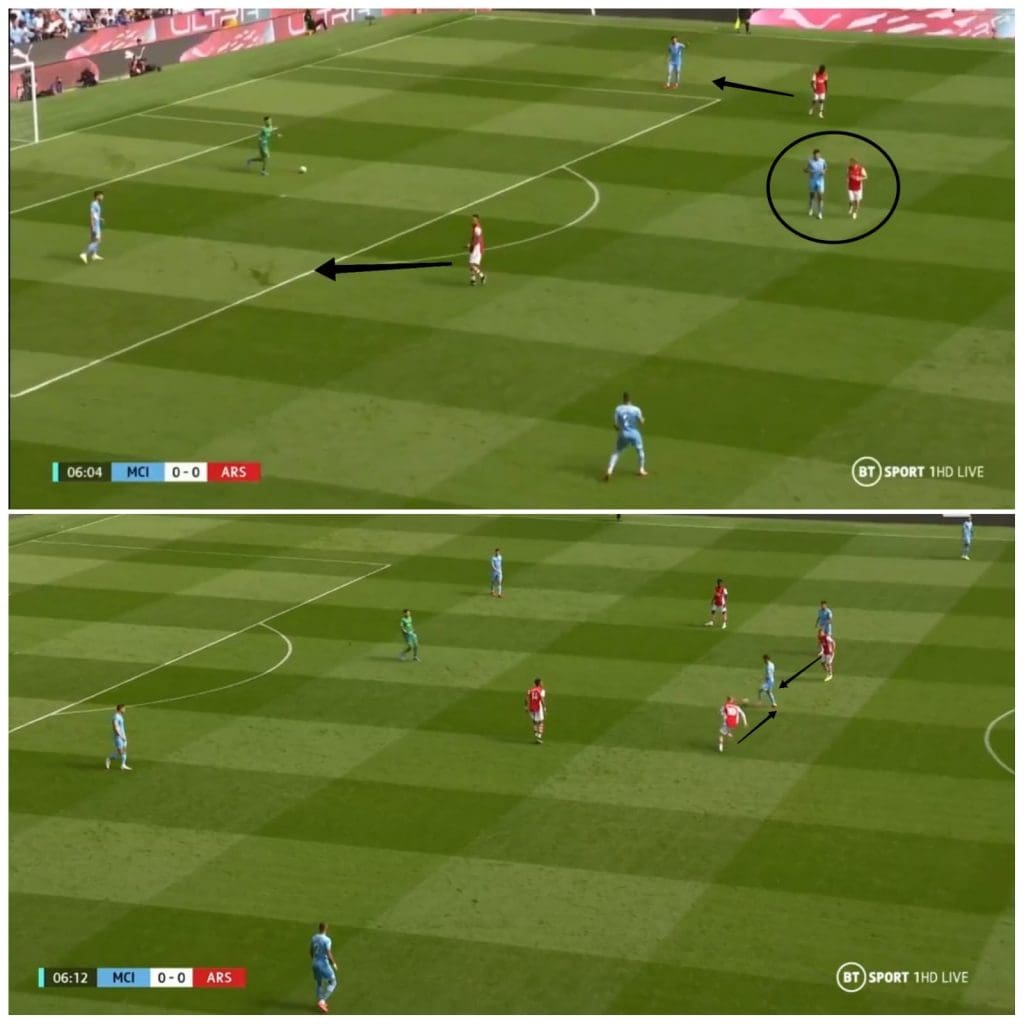 On to the second phase of play in midfield, this time Bernardo Silva finds space and escapes his marker. He realises the space available before anyone else has and is picked out by his teammate – Gundogan who himself is a master in finding and creating space for others. 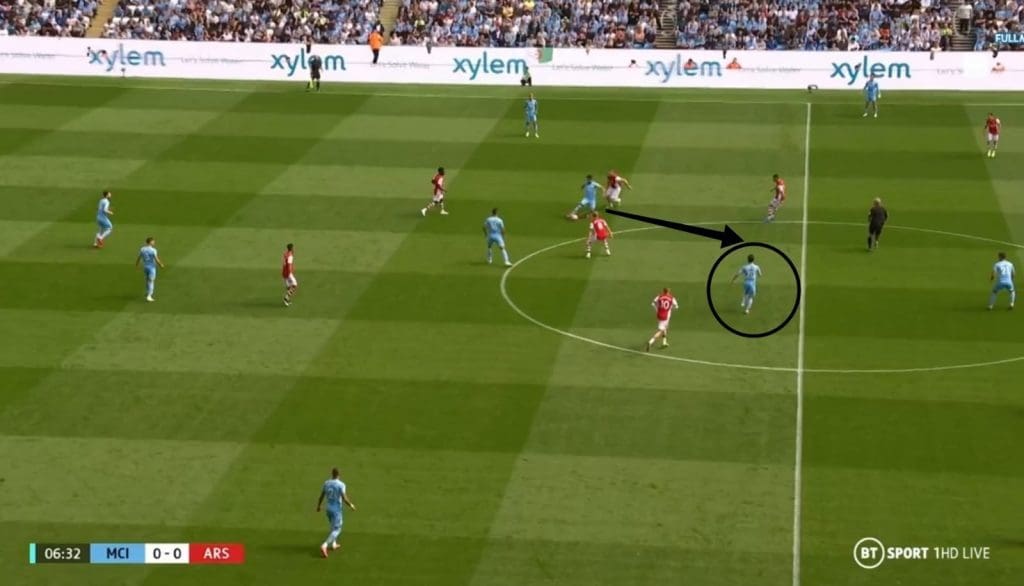 After his pass forward to Jesus (which he does well to keep in play) – Bernardo rushes ahead to provide an option for Jesus in the attacking third. Once again he drags two to three players with him, waits till the City players arrive in the box and pass it to Jesus, who has time and space to pick out a cross for none other than Ilkay Gundogan.  (Arriving  into the box at the right time – Typical Gundogan move) 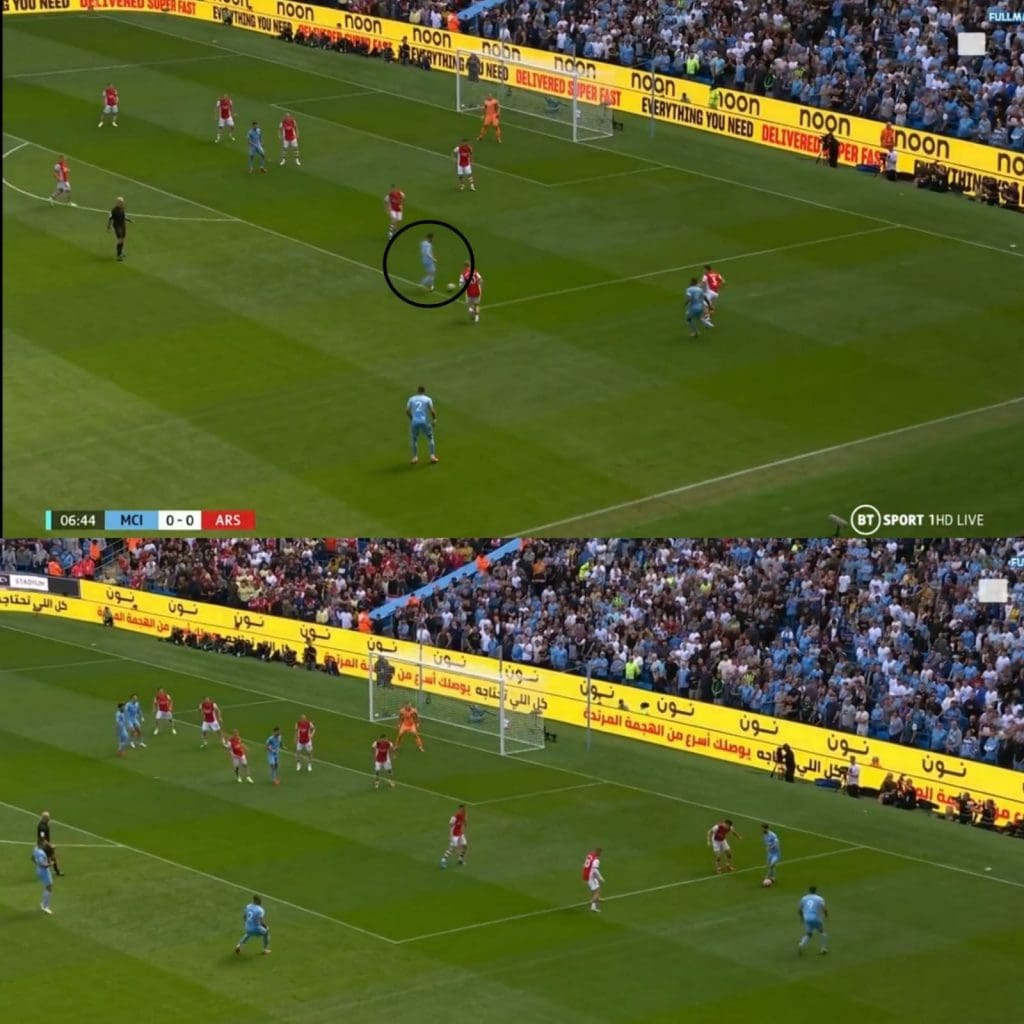 Another sequence on how he creates space for others – Initially he stands still as the centre back is marking him. Once the ball moves to the right-hand side, Silva drops deeper, therefore, attracting his marker which creates space for a runner from the wide-area (Jesus). Walker threads the ball to perfection which leads to a City goal. This is just a basic example of how Silva creates a goal without touching the ball. 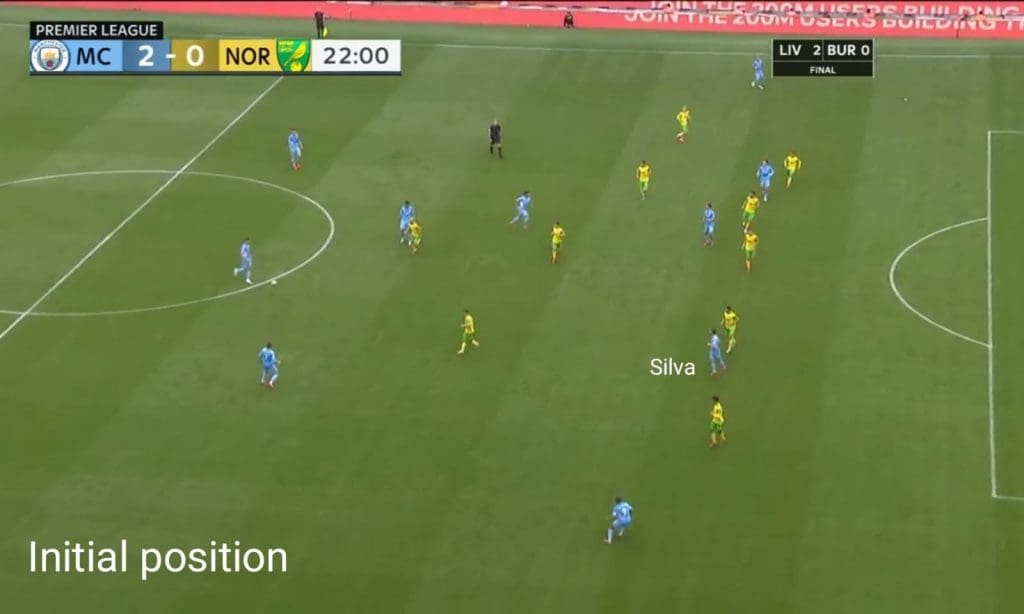 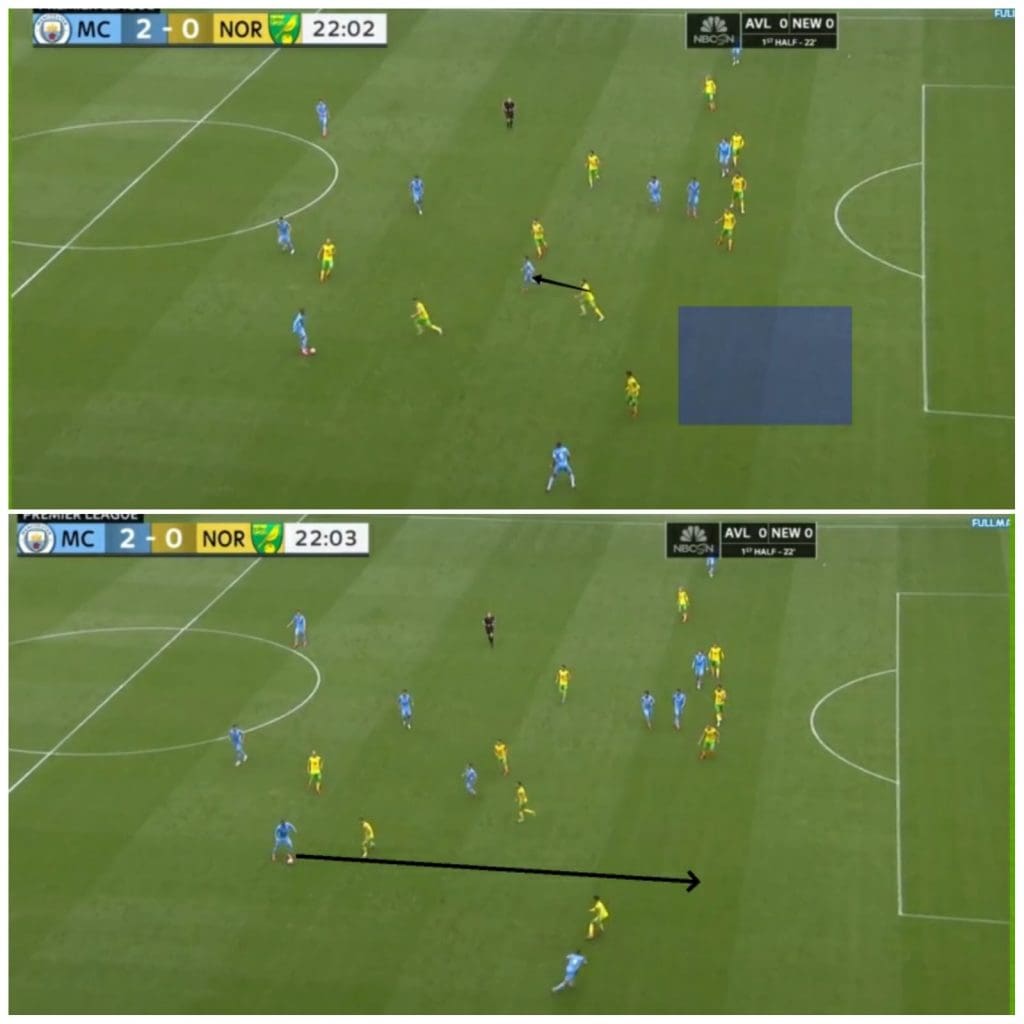 In a way, Ilkay Gundogan’s newfound freedom and his ability to find spaces in the final third happened because of Bernardo Silva, who selflessly dropped deeper to protect City from transitions and counter-attacking situations. His work rate also allowed Cancelo to play higher up the pitch when De Bruyne was injured. City won 21 games on a trot – an English record for the most consecutive wins by a top-flight team and it started when these two were integrated as central midfielders and ended when Bernardo Silva was rested against Manchester United.

Although there is disappointment among City fans for not signing a number 9, Bernardo Silva staying would have made the fans happy. He may not have the most eye-catching stats or playmaking ability like De Bruyne, but his overall game is a crucial part of how Pep wants City to play, as seen when the entire Etihad Stadium erupted in applause after the Portuguese midfielder was substituted in the 58th minute vs Arsenal even though he did not register a single goal or an assist.

Ilkay Gundogan has played different roles for City and showed versatility throughout his career for the Premier League Champions. Showing versatility makes Gundogan a decent midfielder but implementing various roles consistently makes him differentiate among others. When these two play together in central midfield, City has a definite structure and balance both on and off the ball. Most importantly, playing Gundogan and Bernardo Silva together also helps their teammates and allows them to concentrate on their roles.

Pep Guardiola has a huge dilemma in his hands when Kevin De Bruyne returns from injury – whether he plays him in central midfield which is arguably his best position. But in turn, it can disrupt the momentum City have when Gundogan and Silva play; or start him as a false 9, but it will limit what De Bruyne does and is not his best position. Only time will tell what the Spaniard decides.