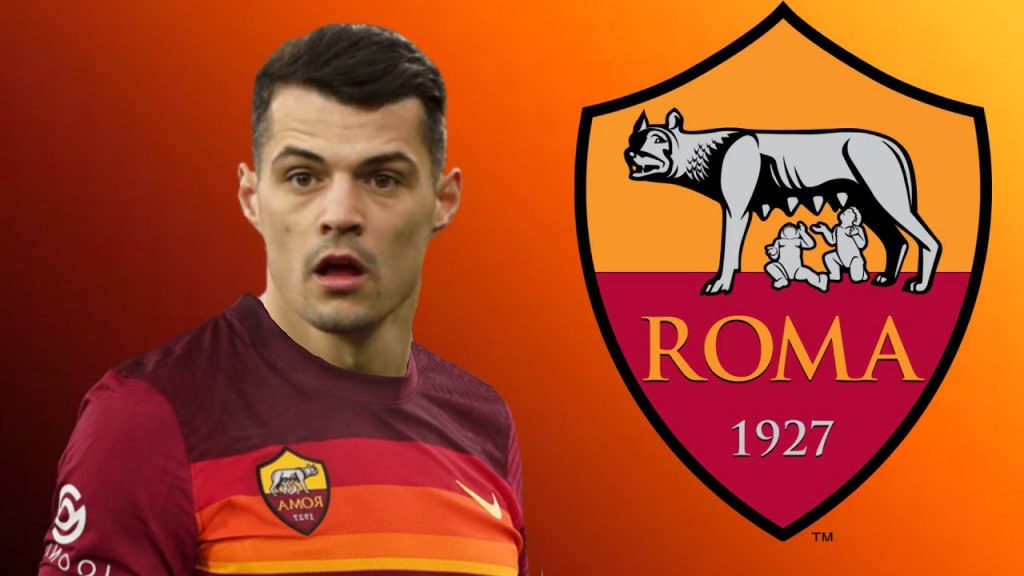 Granit Xhaka, who has made over 200 appearances for the Gunners since he arrived in 2016, is nearing an end to his Arsenal career, with a move to A.S Roma on the cards.

Xhaka, who was on the verge of completing a move to Hertha Berlin in the January transfer window, was persuaded by Mikel Arteta to stay for the season. The Swiss agreed to stay, but with the season now over, he is ready to take upon a new challenge in his career, and the player wants to join Roma as he is a great admirer of the Italian club’s new boss Jose Mourinho.

While Granit Xhaka was never appreciated by Arsenal fans for his tireless work in the center of the pitch, it must also be said that the midfielder could not guarantee an 8/10 performance in every game. His lack of pace and guile in the center of the park cost Arsenal valuable points over the last five years, and the Swiss never reached the potential people hoped he had when he first joined the club.

However, the midfielder has his perks as well. Xhaka is an excellent progressor of the ball while he is also a warrior in the center of the park and has always played for the badge on the front rather than the name on the back. He quite possibly had his best season this year as he covered a lot of ground in midfield while he also deputized brilliantly as a left-back.

Xhaka averaged an 89% pass completion rate while he was also averaging 4.5 long balls per 90 minutes. Both factors are key indicators of how instrumental the midfielder was in the center of the pitch for the club. Thomas Partey who joined the club last summer for £45 million could also not live up to Xhaka’s performances. Additionally, losing Xhaka also means that Arsenal will lose a huge voice in the dressing room. However, Arsenal needs more lively and younger midfielders than Swiss International.

The Swiss lost out with the fans in 2019 when he threw his captain’s armband on the floor after he was booed off the pitch by the Arsenal faithful. It led to the midfielder being stripped off the captaincy role while he was also benched for the game after that. However, the midfielder’s incredible free-kick against rivals Chelsea at the halfway point of the season will be a happy memory in the minds of Arsenal fans, reminding them that he can produce moments of brilliance when asked upon.

In the bigger picture, this is a good move for Arsenal as well as Xhaka, as the player would get to play under a manager he likes, while the club can bring in an upgrade on the player.

Although Arsenal are happy to let the player move on, they are demanding a fee in the region of £20-25 million for the midfielder, and A.S Roma are said to have disagreed with this valuation of the player.

Mourinho has several transfer targets in mind, thus, Roma are not planning on spending more than £15 million for the player, but reports have suggested that Arsenal might eventually budge on the price. Granit Xhaka has served the club for a long time, and the player wants to complete a move to Italy before the start of the Euros.

Granit Xhaka will be allowed to leave the club and according to Metro Sport, Arsenal are already planning on securing a replacement for the midfielder with Yves Bissouma, Guido Rodriguez and Ruben Neves touted for a move to the Emirates.

While the Gunners have cooled their interest in Bissouma and Rodriguez, they are planning on going ahead with the deal for Ruben Neves, which would cost the club £35 million. While negotiations are still going on between Arsenal and Wolves, the Gunners are confident of securing a deal for the Portuguese as soon as possible.

Arsenal wants to raise £60 million through player sales this summer and Granit Xhaka will go a long way in contributing to this amount, should the Swiss seal a deal to the Italian club, which is looking very likely at the moment. Mikel Arteta is planning for a mass exodus to bring in fresh players and make progress on the rebuild job he was appointed for in December 2019.

Arsenal targeting Ruben Neves in stunning £35 million deal
EURO 2020: Switzerland – Could the Swiss cause an upset at the Euros this year?
To Top