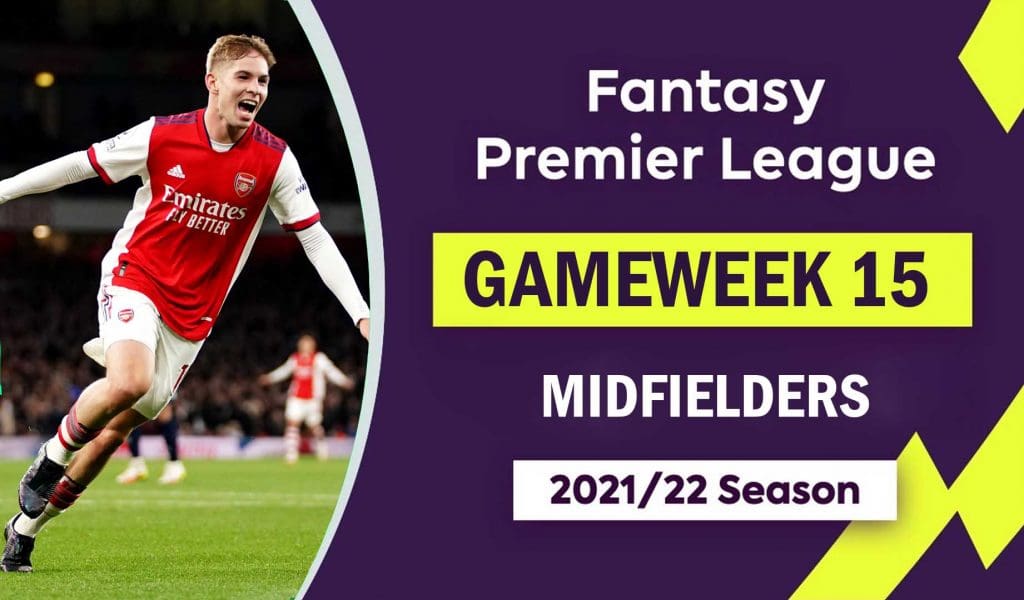 Following a topsy-turvy set of mid-week fixtures, we shift our attention to the weekend as FPL managers prepare for game-week 15. Kicking-on from mid-week, differentials in all positions are, once again, expected to play a vital part going into the next couple of weeks, given a limited range of consistent premiums across the board. Further, with the number of clean sheets set to dry up and goals + assists likely to increase, the midfield emerges as a critical position for Fantasy Premier League managers aiming to strike a sustainable balance given the lack of reliable forwards over a busy period of games.

While many expected the likes of Joao Cancelo (£6.7mn) and Trent Alexander-Arnold (£8.0mn) to increase their incredible points tally in game-week 14, it was Andy Robertson (£7.0mn) and Ruben Dias (£6.0mn), amongst the premium defenders who delivered substantial returns in game-week 14. In other positions, Mohamed Salah (£13.0mn) continued his rampant goal-scoring form against Everton, while Cristiano Ronaldo (£12.3mn), too, rose to the occasion registering a brace against Arsenal. In addition, the likes of Bernardo Silva (£7.3mn), James Maddison (£6.7mn), and Emmanuel Dennis (£5.4mn) added to their credentials ahead of the weekend.

With games coming thick and fast, FPL managers are likely to find themselves on their toes over the coming weeks. Hence, to narrow down the options, in this article, we shortlist three midfielders likely to remain a consistent name on the team sheet whilst emerging as a potential attacking contributor vis-à-vis upcoming league fixtures.

The Gunners’ most promising attacker this season, Smith-Rowe could play a major part if Arsenal are to secure a European spot at the end of the campaign. The youngster’s contributions have been instrumental to the team’s tremendous run of form, having already scored four goals and provided two assists this season. In addition, Smith-Rowe, once again, proved his potential as he opened the scoring for Arsenal

The midfielder currently boasts the highest number of goal contributions (6) and ranks third for expected goals (2.2xG) amongst his teammates this season. Additionally, Smith-Rowe has also completed the most number of passes into the 18-yard-box (16), registering the second-highest number of shot-creating actions (35) at the club.

Facing an Everton side sinking under pressure, Arsenal head in as overwhelming favourites for the win. Provide the Gunners bounce back following their disappointing loss at Old Trafford, Smith-Rowe is likely to find remain a major contributor to their attacking prospects for the remainder of the campaign.

Manchester City’s most promising attacker since the beginning of the campaign, Silva’s contributions continue to be vital to the team’s positive results this season. The Portuguese international has already registered three double-digit hauls, having already scored five goals and provided three assists in the ongoing campaign. Further, Silva has netted thrice in their last four league games and will be keen to build upon his recent performances heading into a favourable set of fixtures.

Currently the club’s highest goal-scorer (5), Silva tops the chart for goals/shot (0.33%) amongst his teammates. Additionally, the midfielder also ranks fourth for passes completed into the 18-yard-box (19), and is the first runner-up for shot-creating actions (43) at the club this season.

Facing a defensively vulnerable Watford side this weekend, Manchester City are expected to secure a comprehensive victory at Vicarage Road. Provided Silva is immune to possible rotation, the midfielder is more than likely to deliver a goal contribution, thus, building up momentum ahead of a decent set of league fixtures until the turn of the year.

The club’s highest scoring (68 pts.) FPL asset this season, the South-Korean will be keen on contributing to Spurs’ quest for top-four over the remainder of the campaign. Son registered his first attacking return in four games against Brentford on Thursday and will be hoping to build upon his performance heading into a decent set of fixtures.

The winger is Spurs’ highest goal-scorer (5) this season and has already registered three double-digit hauls hitherto. Further, he boasts an incredible number of expected goals (4.0xG) and tops the chart for shot-creating actions (35) at the club. The South-Korean also ranks first for carries (15) into the 18-yard-box and second for carries (25) into the attacking third amongst his teammates this season.

Facing a relegation-battling Norwich side this weekend, the Lilywhites will favour a comfortable victory at home. Provided he gains some consistency, Son is likely to find his feet, thus, significantly improving his output over the coming weeks.