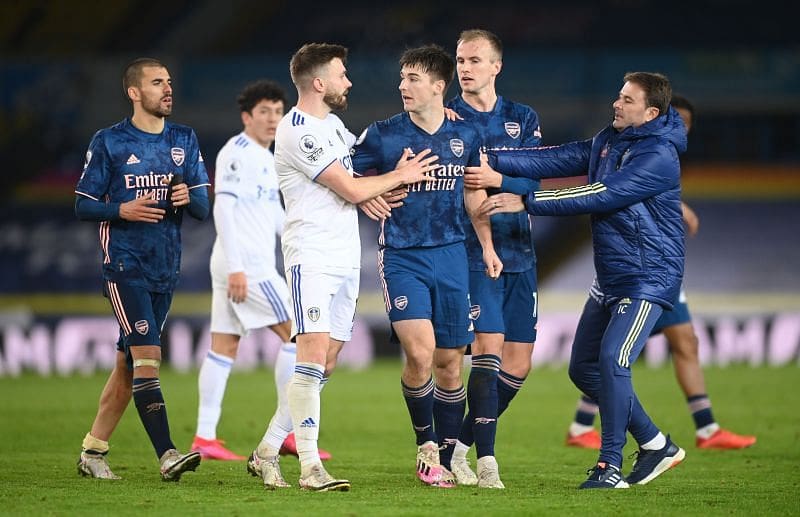 Mikel Arteta is set to host Marcelo Bielsa’s Leeds United at the Emirates with the Gunners finding themselves under pressure for results after losing both of their last two matches and only picking up seven points of the last 15 available.

And it doesn’t get any easier for Mikel Arteta’s men as they’ll face Leeds one of the best attacks in the Premier League and a high pressing side will surely prove to be a test for the Gunners to deal with.

Here, we look at three tactical battles that the Gunners would need to win if they want to take all three points off the match:

Leeds United applies man-to-man press when out of possession and it has always been something which the Gunners have failed to cope up with due to a lack of press resistance players in their side, apart from a few.

A probable way to deal with it could be the inclusion of Dani Ceballos into the first team lineup with Arsenal’s latest summer recruit Thomas Partey out injured with the Spaniard being one of the more press resistant players Arsenal have on their side.

Leeds looks to win the ball high up the pitch and hit the opposition on the counter and Arsenal would have to be wary of the threat. Mikel Arteta has deployed a high backline in the last couple of matches to squeeze the space for the opposition, however, he might have to revert to a different tactic with the kind of space that the Leeds United team possesses in their side.

The Englishman is not new to Arsenal having spent most of his younger days at arch-rivals Chelsea and would surely have an extra incentive to perform against the Gunners. Bamford, while being a centre-forward, plays so many different roles for Leeds United and is a key player for Leeds United.

Arsenal would have to be wary of his threat or it could be a tough evening for the Gunners.