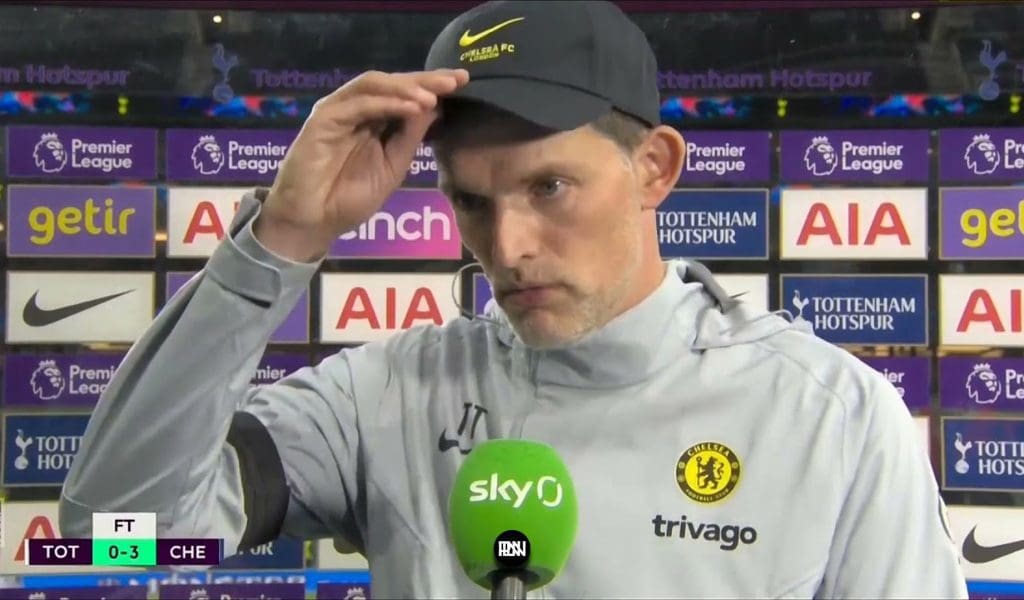 Thomas Tuchel’s Chelsea seem like quite the form package for this season. Despite their tough opening fixtures that saw them go away to three traditional ‘big six’ outfits, the Blues showed grit and determination to take seven points out of a possible nine. While the trip to the Emirates saw Chelsea reign supreme and take three points in a comprehensive 2-0 win, the trip to Anfield saw the Blues dig in with ten men to rescue a point against a relentless Liverpool but their trip to the Tottenham Hotspur Stadium on Sunday showed a different façade of the Blues altogether.

Spurs came out the sharper team from the first whistle, as Chelsea struggled to make anything from the fair few counterattacks that they managed to get. The Blues did not have a single shot on target for the entirety of the first half, and barely hung on to maintain their clean sheet by the end of the half – a lackluster performance that gave Tuchel a lot of talking points in the dressing room. But what the German head coach said in the half-time interval along with a little tactical tweak went on to become all the difference in what proved to be a very contrasting second half. 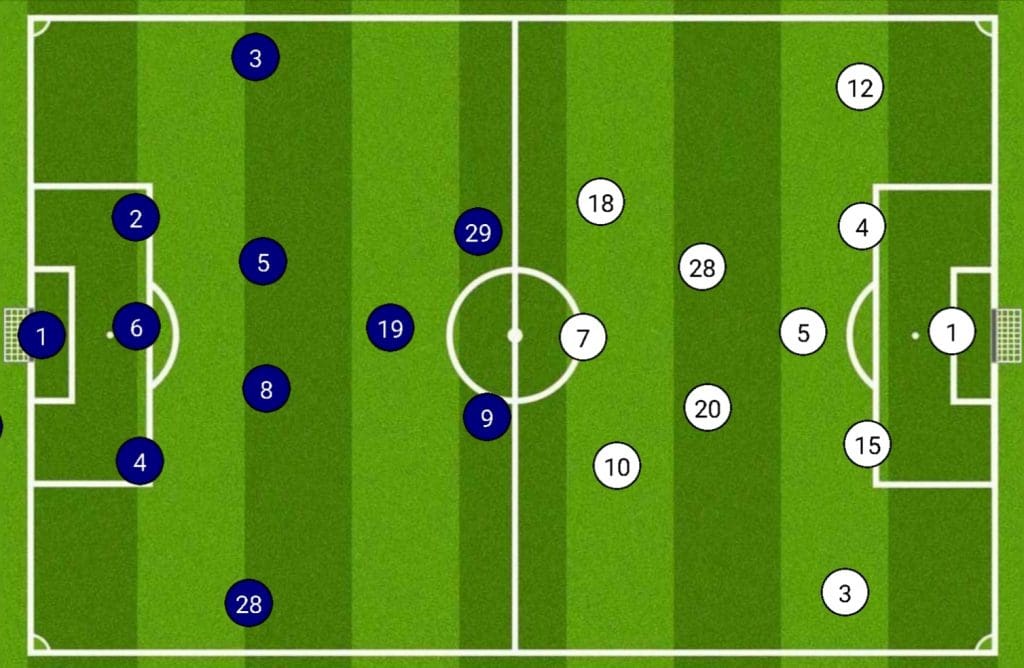 Tottenham were having a lot of success in midfield in the first half, as they were able to regularly create overloads that caused one of the Chelsea centre-backs to step up and leave gaps at the back. Nuno Espirito Santo adopted a man marking-oriented press that was designed for Heung Min-Son to exploit the lack of pace of veteran defender Thiago Silva – by directly marking each of their defenders and midfielders, Spurs made it very difficult for Chelsea to play out from the back. Through Pierre-Emile Hojbjerg, Tottenham always seemed to have an extra man in midfield which left gaps open in behind for Chelsea, for Son to run into and make the most of his chances. 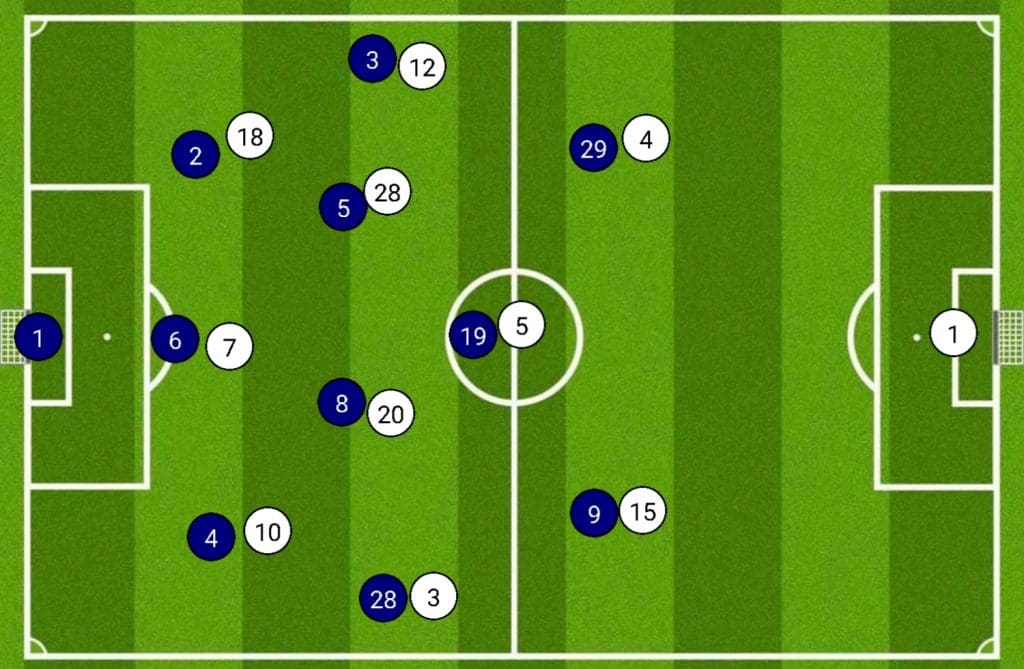 When the returning N’Golo Kanté was seen to be preparing to come on for the second half, many expected either Mateo Kovacic or Jorginho to settle for the bench. But as the substitution board went up, it meant that Kanté would come on to replace Mason Mount – a usually indispensable part of the Chelsea team under both of their last two managers. Mount who started the match in behind Kai Havertz and Romelu Lukaku was mostly anonymous because of Hojbjerg giving him a hard time in midfield, and after attracting some constructive criticism from Tuchel after the mid-week outing against Zenit – Mount was taken off to inject a fresh burst of air and add intensity to the game through the ever-dependable and tireless Kanté.

But besides the work rate and individual ability that Kanté provides to stop getting overrun in midfield, it also meant a slight tweak in the Blues’ system. While Kanté would slot into a flat midfield trio alongside Jorginho and Kovacic, it was the pairing of Kai Havertz and Romelu Lukaku up front for Chelsea in the second half. An extra man in midfield meant that Tottenham could not crowd the midfield area as they did time and time again in the first half, which also allowed the Blues to gain a level of control in the match. While either Lukaku or Havertz would occupy Hojbjerg, it meant that it was Chelsea who made their overloads show in the second half. Jorginho had the freedom to find passes consistently, and Chelsea meant business once again. 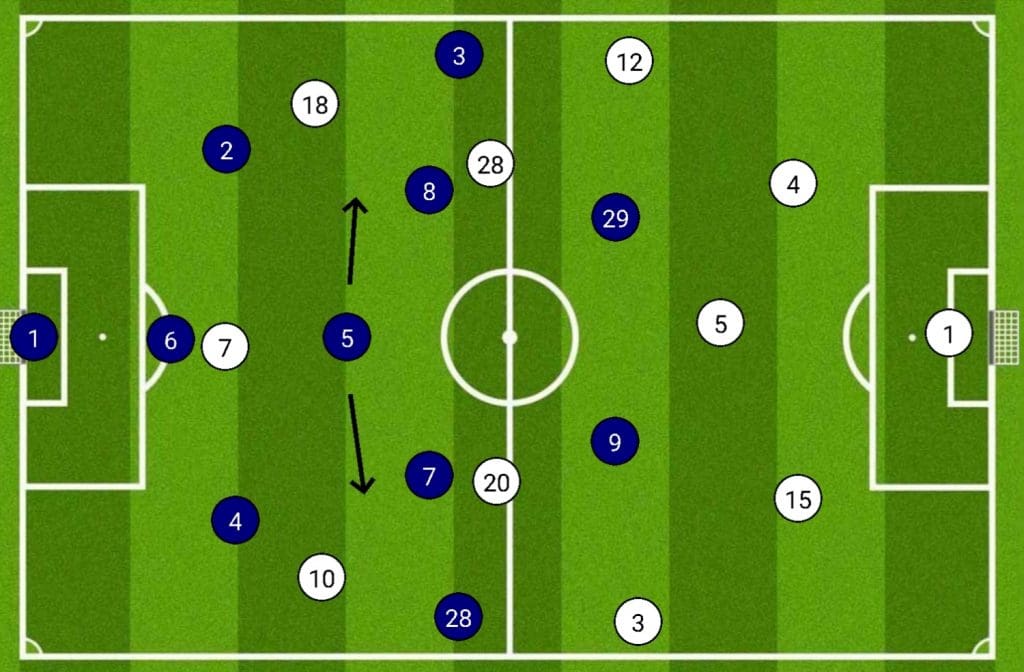 The tactical tweak meant that the proactive Tuchel is not slow to ring in the changes whenever required, and does not want to wait until a certain point of time to make his alterations like most of his predecessors. While Antonio Conte, Maurizio Sarri, and Frank Lampard were all criticized for not being willing to make early changes, Tuchel is not like any of the men who were before him. And his in-game management did work like a dream, as it was the ideal second-half performance that the German would have wanted after altering shape at halftime. The Blues came out all guns blazing and made the difference show against a Spurs team who were tactically outplayed.

While it was Thiago Silva who opened the scoring for Chelsea with a brilliant header from a corner, it was the substitute Kanté himself who found a pocket of space in midfield – and came up with a speculative shot that took a lucky deflection off Eric Dier and trickled over the goal line. The introduction of Timo Werner against tired legs bodes further trouble for Tottenham, as he struck up a combination with Lukaku – as the Belgian held up the ball while dragging defenders into midfield, Werner could run into empty spaces using his blistering pace. Chelsea could have and should have scored at least two more, but they had to settle for a 3-0 win after Antonio Rüdiger scored in second-half stoppage time from a Werner cut-back across the goal.

It was a major statement of intent from the Blues who went top of the Premier League table following the win, as Tuchel showed that his team can turn a game around even after getting off to a bad start. Chelsea looks as multi-faceted as they ever have, and it has not come as much of a surprise considering Tuchel’s reputation of being quite the tactical tinker-man. The German head coach was known for having a trick or two up his sleeve during his time at Borussia Dortmund and Paris Saint-Germain, and despite his Champions League-winning campaign with a fixed system last season – he would not hesitate to move the goalposts around if it is truly needed.

It would not be an understatement to say that the premiere of the 3-5-2 was a successful one, and it is likely not to be just a one-time thing as well – against teams who will look to cause Chelsea problems by creating overloads in midfield, it might as well go on to become Tuchel’s go-to option. Timo Werner might also feature more than just an option off the bench, as his combination with Lukaku in a front two was encouraging to say the least. Werner, who was Chelsea’s top assist provider last season provides more direct incision into rear guards compared to Mount or Havertz, and it might not be long before the pair start alongside each other this season.

The difficult run of fixtures is not yet over for Chelsea, as after a mid-week contest against Aston Villa at home in the third round of the Carabao Cup, they will welcome the English champions Manchester City on Saturday. Pep Guardiola will be keen to avoid a fourth consecutive defeat to Tuchel and his men, and it promises to be another mouth-watering tactical battle. But Chelsea who have scored 12 goals in the league this season and conceded only once, (they are yet to concede from open play) will fancy their chances against a team who at the moment, seem toothless in attack.

However, if Guardiola chooses to emulate Nuno Espirito Santo and shapes up in order to exploit spaces in midfield, it would not be a surprise to see Tuchel bring out the 3-5-2 once again. The Tottenham head coach might have shown the rest of the league as to how to deal with Chelsea’s defensive shape that helped them keep more clean sheets than goals conceded since Tuchel came to Chelsea – but the Blues’ rich reserve of resources and tactical onus at the helm means that they are quick to identify a problem and fix it as early as possible. The tactical flexibility and problem-solving skills of Tuchel, and a strong squad bodes danger for the rest of the league and makes Chelsea the ultimate form package in the Premier League right now, and the Blues – in their current form – look like one of the strong favourites to lift the coveted league title in May next year.