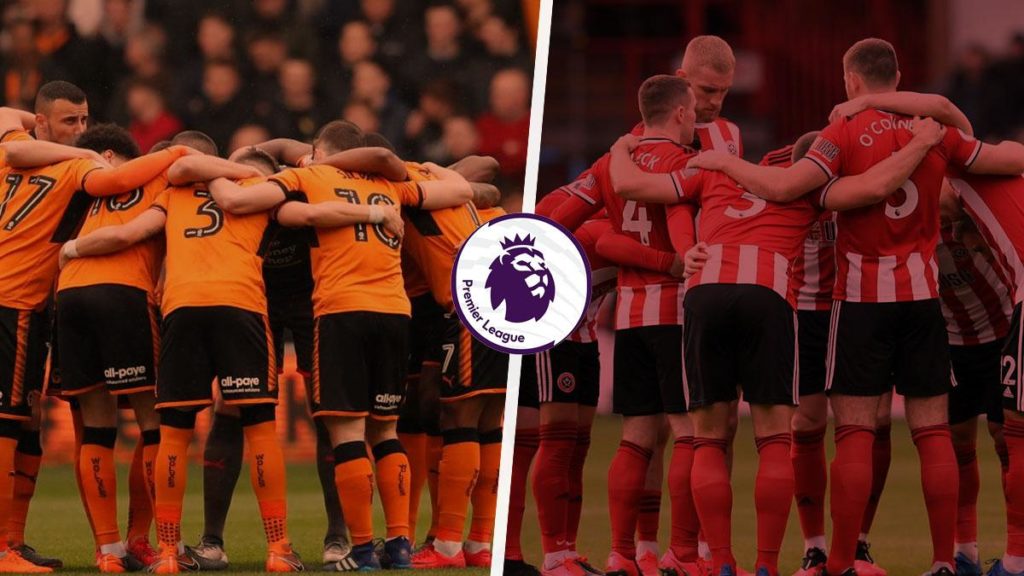 Sheffield United will host Wolverhampton Wanderers on Wednesday as both teams struggle to make up for lost ground after dropping points in their respective last outings.

Wolves dropped points at home after a 2-0 loss to Arsenal whereas Sheffield were held to a 1-1 draw at Burnley over the weekend.

Both teams are eyeing European football for next season with Wolves in sixth place and Sheffield in ninth place currently.

Here are five key head to head battles that could decide the fate of the match on Wednesday :

Basham has been an ever present figure in defence for the Blades this season, making 33 appearances for Sheffield and has featured in all their league games.

The Englishman has played a pivotal role in Sheffield’s impressive first season back in the top flight and has no doubt been one of the standout performers of the season for the club. The 31-year-old will be needed again on Wednesday to contain the rapid strikeforce of Raul Jimenez and Diego Jota.

Willy Boly has been an integral part of the Wolves setup since his arrival from Porto back in 2017. The Frenchman has quickly become a fan favourite at the Molineux and has been a regular starter in the backline under Nuno Espírito.

The 29-year-old is adept at tackling, also known for his fantastic heading ability and will need to be on his toes to thwart the versatile Sheffield attack.

The Irishman secured a point for Sheffield after scoring the equaliser against Burnley, his first goal in the top-flight. Egan was integral to Chris Wilder’s side that achieved promotion from the Championship to the Premier League and is a thoroughly brilliant defender.

The 27-year-old has developed into a fantastic ball playing centre-half and is brilliant in the air, and plays an important role from the middle of a back three in the Sheffield defence.

Conor Coady has developed into a physically strong and imposing defender since his arrival at the club back in 2015. His defensive abilities will certainly be called upon to tackle Sheffield’s fluid attack on Wednesday. The Englishman is calm and assured on the ball and leads the team from the heart of defence. His leadership will certainly be needed on Wednesday against the likes of McGoldrick and McBurnie.

The Scotland international has missed out on just two matches in the league so far, and is clearly Chris Wilder’s favoured striker up top.

But goals have dried up recently for McBurnie, he has scored only five in the league this season, and Frenchman Lys Mousset has been replacing the forward as a substitute in recent games.
McBurnie was at his best against Tottenham, bullying off the Spurs defenders and displaying excellent hold up play to tee up the rest of the Sheffield attackers.

Wilder will be expecting another fantastic display from the Scot as the Blades target European football for next season.

Raul Jimenez has been in phenomenal form under Nuno Espirito since making his move from Portugal permanent. The Mexican has featured in all of their league games this season, scoring fifteen goals in the league already. The 29-year-old has a knack of finding the back of the net with his aerial threat and terrific shooting range and will be instrumental in Wolves’s push for a sixth place finish.

Sheffield’s record signing Sander Berge is finally finding his feet in England’s top flight. The 22-year-old scored the first goal in the 3-1 victory over Tottenham and is expected to make his 12th start in the Premier League on Wednesday.

The Norweigian used the lockdown to build up his stamina and reach full fitness and made an instant impact against Tottenham, replacing the injured John Lundstram from the right side of midfield.

Ruben Neves has formed an important part of midfield under Nuno, capable of scoring wonderful goals, showcasing great passing skills and is fantastic at set pieces. Neves has the ability to dictate play from deep within the Wolves midfield and unleash runners like Traore down the wings. He is not afraid to stick in a tackle and provides much needed defensive cover to the backline.

Norwood has been an ever present figure for the Blades from the center of the five man midfield, breaking down opposition passes and has helped the Blades set up the second best defensive record in the league, only behind Liverpool. The Englishman led Sheffield’s push for promotion and has continued that momentum into the top flight, and is at the very top of the interceptions and tackles list.

Joao Moutinho maintains a fantastic work-rate, on and off the ball, constantly dropping deep to recover the ball from the opposing team.

The 33-year-old is establishing himself in the Premier League after a successful time at Monaco and was named the Player of the Season for Wolves last year.

The Portuguese international has again, featured in all league games this season under Nuno, and formed a solid partnership with Ruben Neves to sniff out any opposing threats from midfield.