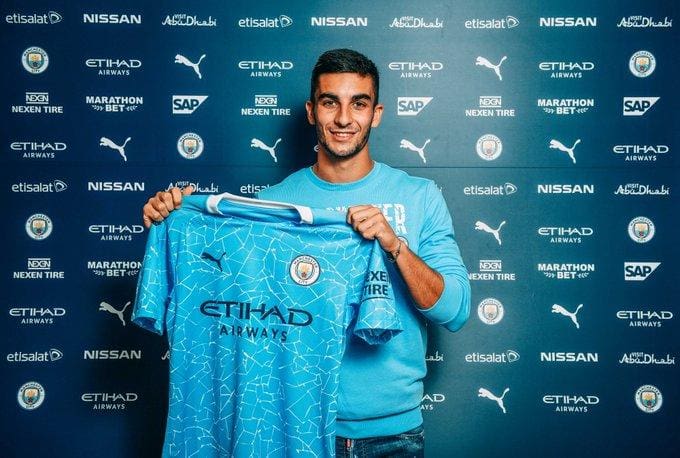 Manchester City have officially confirmed that they have completed the signing of Ferran Torres from Valencia.

The youngster becomes Manchester City’s first summer signing, putting pen to paper on a five-year deal at the Etihad Stadium.

Pep Guardiola’s side are reported to have paid an initial fee of of £20.9 million plus bonuses for the Spain Under-21 international.

The Citizens moved swiftly to pursue the Valencia player after losing Leroy Sane to Bayern Munich prior to the end of the Premier League season.

Ferran Torres on joining Manchester City, speaking with club’s official website: “I am so happy to be joining City. Every player wants to be involved in attacking teams and Manchester City are one of the most attacking in world football. Pep encourages a really open, aggressive style, which I love, and he is a manager with a proven track record of improving players. To have him overseeing my development is a dream. City have won plenty of trophies in the last 10 years and I hope I can play a role in continuing that success.”

City’s Director of Football Txiki Begiristain added: “We have followed Ferran’s progress closely and have been very impressed. He is young and still developing, but his technical qualities are exactly what we are looking for in a winger. He is quick, direct, can create space with one movement and is capable of producing match-winning moments. I feel this is the perfect place for him to develop and with Pep in charge he can take his game to the next level.”

Torres managed six goals in 44 appearances across all competitions last season, scoring four in the Spanish La Liga as Los Che finished ninth on the table.

The 20-year-old can be deployed on either side of the wing and can also play through the middle. He also has quick feet which allows him to leave behind opponents when in a tight space.

He will definitely looks to be a good addition to Guardiola’s side who are also in the market for a central defender.