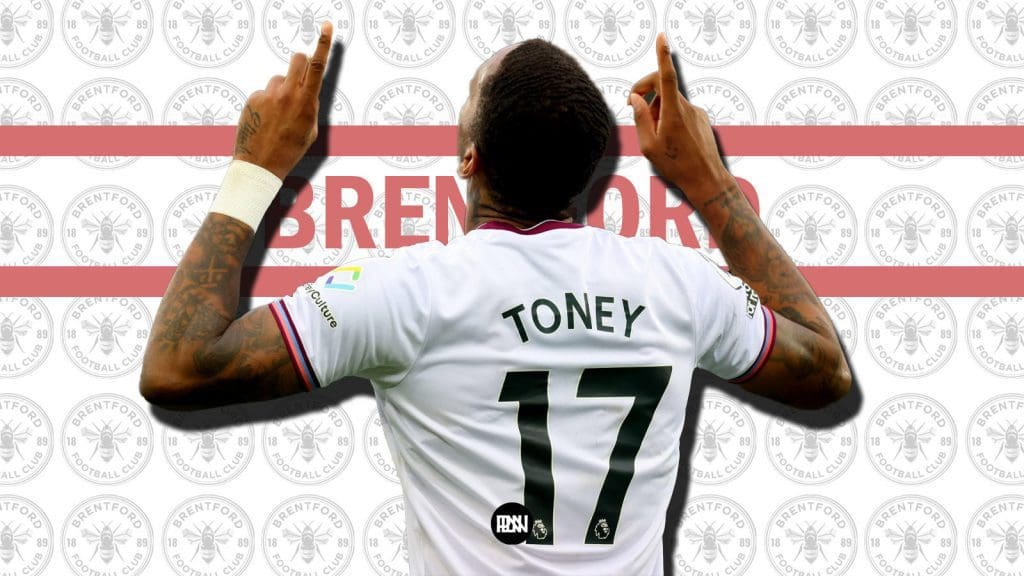 The Telegraph reported this week that Newcastle United have entered the race to sign Ivan Toney from Brentford after ending their pursuit of Benfica’s Darwin Nunez.

Nunez, 22, is looking for a big move this summer with his intentions of competing for the UEFA Champions League & so Newcastle United have switched their attention to Toney. The Northampton-born Englishman has had an amazing first full Premier League season with Brentford scoring twelve and assisting four meaning he has contributed to 40% of the goal scored by The Bees.

Once a Newcastle player when they signed Toney from his boyhood club Northampton Town, he was never given a fair opportunity to compete for the first team & was subsequently on loans to Barnsley, Shrewsbury Town, Scunthorpe United & Wigan Athletic before permanently leaving the club in 2018 and he signed for Peterborough United who were playing in League One. Ivan shined for Peterborough scoring 49 goals in 94 games. There he caught the attention of Brentford and they secured his services for £5m and around £10m with add-ons beating the likes of Tottenham Hotspur who reportedly wanted him to play as a backup to Harry Kane.

Toney helped Brentford to secure Premier League football for the first time in the club’s history while also breaking the record for most goals scored in a season in The EFL Championship scoring 31 times in 45 games. A lot of Premier League clubs were linked for a move but Toney decided to stay put and now has solidified Brentford’s stay for another year.

But Ivan Toney has made some indications that he wants to leave The Bees with a video appearing online where is seen saying “f*** Brentford” for which he has already apologized to the supporters and ‘also vowed to make up for the incident by giving his all for the Bees in the final four months of the Premier League season.’

Brentford will “look to take advantage” of cash-rich Newcastle this summer if they decide to swoop for their star striker Ivan Toney.

WHY DO NEWCASTLE NEED IVAN TONEY?

Since Eddie Howe’s appointment, The Magpies have ahead leaps and bounds in terms of progress on the pitch. Newcastle had failed to win any of their opening 14 matches which saw Steve Bruce lose his job and with new owners in came Eddie Howe, who was previously sacked by AFC Bournemouth. Since then Newcastle sit second in the Premier League form table – behind only Liverpool. Since January 22 they’ve taken 28 points from a possible 39. They’ve won nine out of 13.

The Magpies have started to score goals but lack a lethal striker who can score 15-20 goals every year. Joelinton has been transformed into a central midfielder to help out the team in defense solidarity and ball progression while Callum Wilson rarely is fit to complete an entire season of the Premier League. The club did splash the cash on Chris Wood from Burnley but so far has just managed two goals in about 1200 league minutes.

Standing at 5ft 10in, Toney is excellent in the air and is a physical specimen winning 4.6 aerial duels per match. He is also versatile having played in multiple systems for Thomas Frank, playing a 3-4-3, 3-5-2, and a 4-3-3 system. A hard worker on and off the ball, Toney knows how tough it is to play when teams did not have the lion’s share of possession. He is also an underrated creator laying 1.3 chances for his teammates.

With the likes of Allan Saint-Maximin, Bruno Guimarães, and Kieran Trippier all providing excellent service, The Magpies are after a striker to put away all the chances created by these players. Brentford are understood to have put a £30m price tag on their striker. It remains to be seen whether Ivan Toney will want to return to the club that sold him to Peterborough for just £650,000 four years ago.