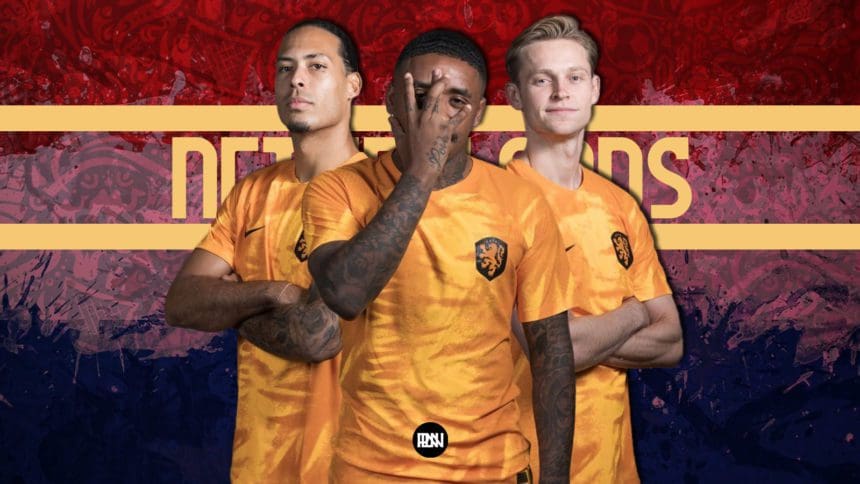 After surprisingly failing to qualify for the 2018 World Cup, the Netherlands are back on the grandest of stages under Louis Van Gaal’s leadership. A period of rebuilding was unquestionably required, as former Dutch footballing legends were gradually phased out. Although it took them a long time to return to where they once belonged, the Netherlands arrive in Qatar with a slew of talented players who are at the top of their game and have one goal in mind – to get their hands on the prestigious golden trophy.

Virgil van Dijk leads the pack with the likes of Nathan Ake, Matthijs de Ligt, Jurrien Timber, Daley Blind, and Stefan de Vrij forming a defense that is solid on the international stage. Perhaps they do not possess the star name in attack, aka the Messis, Ronaldos, and Neymars, but the balance in the forward areas combined with the experience of Louis van Gaal could steer them in their quest to achieve the treasure.

The Dutch were termed as dark horses ahead of the tournament, whilst they should be considered the favorites alongside Brazil and Argentina. The Oranje come into the tournament with plenty of momentum on their side, as they are unbeaten since the arrival of their charismatic yet stern manager. The record since their Euro 2020 exit – 15 games, 11 wins, 4 draws and 41 goals speak for itself and the fluidity in attack is admired but hard to stop when they hit their stride. This article focuses on the Netherlands’ setup and how their attack can propel them to the ultimate glory.

Memphis Depay spearheads the attack in Van Gaal’s 3-4-1-2 formation with Steven Bergwijn usually partnered alongside him up top. The two players are extremely quick, excellent on the ball, and can drift wide to take on the full-backs, therefore creating a fluid system and space for the midfielders to make late runs into the box. LVG has also included both Vincent Janssen and Wout Weghorst, who are both target men and pure strikers compared to Bergwijn and Depay. So, he certainly has the option to change the dynamic during a game.

Behind the front two, the number 10 spot is usually occupied by Steven Berghuis of Ajax. Although not a traditional attacking midfielder, the Ajax man can cause chaos by either dropping deep or drifting between the lines, and his industry in midfield is appreciated by the manager. Fellow Ajax teammate Davy Klaassen is also picked in the 26-men squad and his ability to invade the penalty area serves as a variant to Berghuis’ profile. This once again gives him the option to switch the dynamic of the side against certain opponents.

But Cody Gakpo’s season at PSV means he could shoehorn his place in the starting 11 ahead of both the Ajax stars. A fast and strong outlet with an unbelievable ball-striking technique, Van Gaal possesses a player who is capable of changing games single-handedly. The double pivot, meanwhile, includes Teun Koopmeiners and the center-piece of the team – Frenkie de Jong. Both the midfielders are masters on the ball and Van Gaal depends on them to control the tempo of the game.

Kenneth Taylor and Marten de Roon offer quality backup solutions, but it is hard for the two to displace De Jong and Koopmeiners in the starting eleven. Van Gaal could also use Berghuis deeper in place of Koopmeiners if the Netherlands are allowed to have possession and pin back the opposition. On to the wide areas, Denzel Dumfries starts as a right wing-back, but he is usually high and wide offering runs in behind the defense and delivering dangerous crosses into the box. The full-back provides the width and is an excellent outlet thanks to his energy and pace.

The 3-4-1-2 formation changes to a back four in possession with Daley Blind as the left-back and Jurrien Timber as the right-back. The attack is certainly flowing, and the rotations have caused enormous problems for their opponents. Noa Lang and Xavi Simons have also been called by Van Gaal and their youthful vibrance can certainly benefit the team.

Netherlands switch to an asymmetrical 4-3-3 in possession when teams look to sit back. De Jong acts as the link between the defense and attack while Dumfries holds the width high and wide. Meanwhile, one of Bergwijn or Depay occupy the left half-space, with the attacking midfielders (Berghuis and Gakpo here) between the lines. Blind occasionally joins the attack and invades the box to create overloads when Dumfries delivers a cross.

In the same passage of play, the Netherlands keep hold of the ball and move the opponent around with short and quick passes. There are plenty of rotations with Berghuis or Bergwijn sometimes dropping deep from the half spaces, or Depay and Gakpo interchanging their positions. They look to overload and lure the opponents to the left before switching it to the right with Dumfries as the outlet.

When Van Dijk eventually switches the ball to Dumfries, Berghuis makes an under-lapping run to the wide area from the right half-space and receives the pass from the wing-back. Notice how Depay, who was marked tightly from the center-back, drifts away from him, while at the same time Gakpo is looking to make a run into the six-yard box

As Berghuis cuts inside and plays a pass to Depay, Dumfries makes a third man run into the space and Depay plays him through with a one-touch pass. Dumfries ultimately crosses the ball into the box with Bergwijn, Blind, and Gakpo, waiting to pounce in the six-yard box as the latter scores a tap-in.

In their game against Belgium in Brussels, they created overloads in midfield and dragged their opponents across the pitch. Here, Depay, who now occupies the left half-space with Bergwijn upfront, makes a move behind, but Belgium fail to get tight to him. Ake plays the ball to Depay, who has the time to turn and carry the ball. 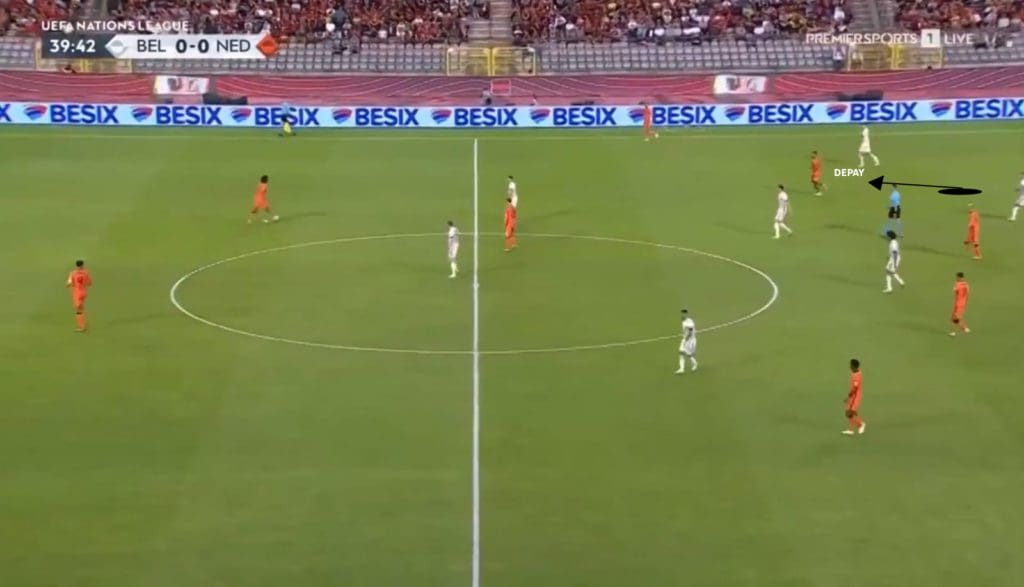 As Depay passes it to De Jong, he makes a run that drags Alderweireld and presents an opportunity for Bergwijn to drop deep and turn with the ball. Also notice how Netherlands’ midfielders (Berghuis and Klaassen) occupy Belgium’s center-backs, therefore, further allowing an opportunity for Bergwijn to receive the ball with time and space. The Ajax man ultimately scores a long-range effort past the outstretching Mignolet. 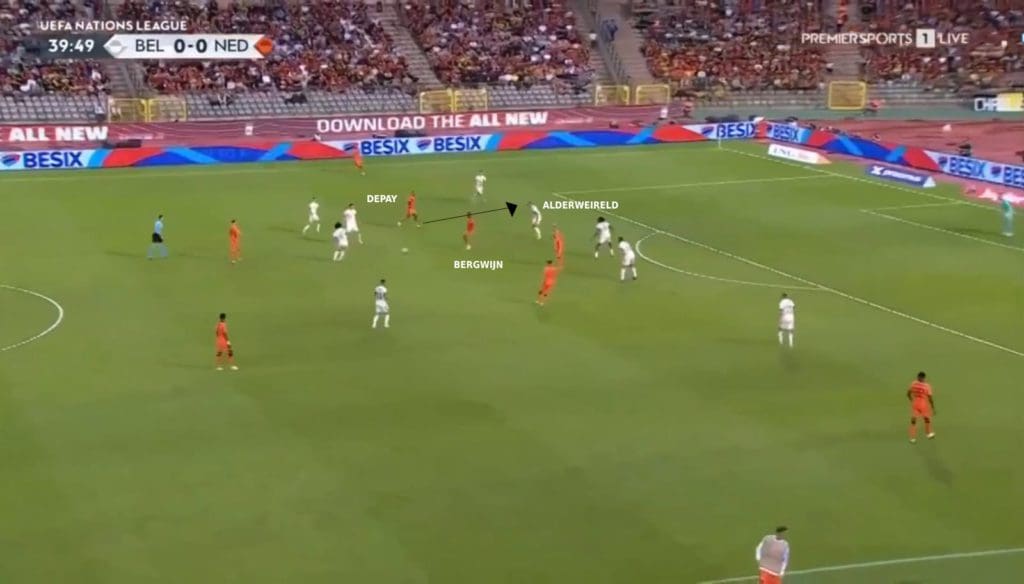 Netherlands also look to press high up the pitch and have high turnovers in central areas. And with Depay and Bergwijn waiting to pounce, they certainly have the knack of scoring on the break and even showed it against both Wales and Belgium during the recent Nations League game.

In fairness, Van Gaal has assembled an attacking unit that might not look the best on paper but are undoubtedly a balanced unit playing to their strengths. The attack revolves around Depay (21 goals in his last 22 appearances for the Oranjes), but the likes of Bergwijn and Gakpo are dangerous as well. Moreover, with Jansen and Weghorst in the ranks, Van Gaal has the option to mix if an opportunity presents. So, while the Netherlands are termed a dark horse, it should surprise no one if they reach their penultimate goal – the World Cup, which has missed their grasp by the finest of margins over the past decade.

Are Serbia the underdogs to watch out for at World Cup 2022?
Next Article 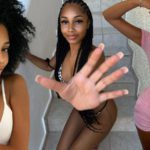