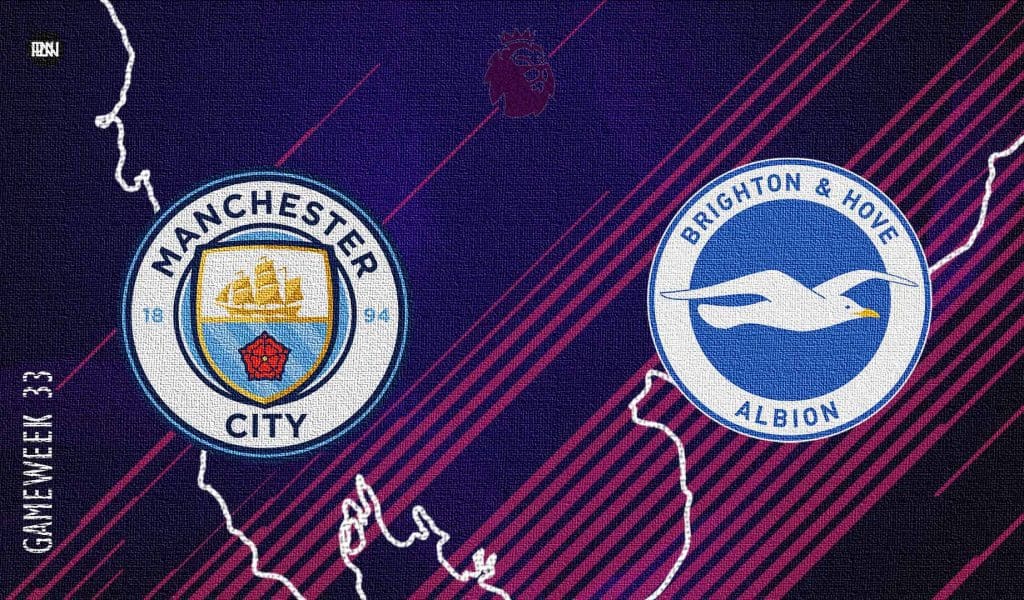 This Premier League gameweek brings to us a game that could have huge repercussions in the Premier League title race. Manchester City host in-form Brighton & Hove Albion at the Etihad on Wednesday night.

Man City return to Premier League action after their FA Cup defeat to Liverpool on Saturday afternoon. It was a thrilling game that ended in a 3-2 loss for the Manchester Blues, with second-half goals from Jack Grealish and Bernardo Silva getting City back into the game after they had a disastrous first half, conceding 3 goals to the rampant Reds. Grealish scored very early in the second half, and City kept plugging away all half but only got a second in the 90th minute to set up a very nervy final five minutes of injury-time. They will turn their attention back to the all-important league, as they chase a 7th PL title, with Liverpool hot on their heels in second place. Manchester City were knocked out of the FA Cup semi-finals for the third year running, and Pep Guardiola will undoubtedly return next year with a vengeance. For now, they will have to deal with high-flying Seagulls who have claimed two big fish in the last two games and will certainly be up for a fight.

Brighton & Hove Albion have seen an upturn in form in the past two weeks, winning two games in a row after going on a 7-game winless run which saw them lose 6 and draw one against bottom-placed Norwich City. However, Graham Potter’s men produced two inspired displays in the last two games, as they defeated two London clubs in a row. The Seagulls visited Arsenal at the Emirates and left with all three points after they produced a stout defensive showing to win 2-1. They then travelled to London again, as a brilliant display saw them be the dominant side against Tottenham Hotspurs. A late Leandro Trossard goal saw the Seagulls leave with three deserved points, as they restricted Spurs to zero shots on target. They now travel away from home yet again, as they go up against the league leaders. Graham Potter will be hoping for a similar display as last time, with the Seagulls certain to have the hopes and prayers of the Liverpool fans with them.

Manchester City fielded a rotated side on Saturday afternoon against Liverpool, with goalkeeper Ederson, defenders Ruben Dias and Aymeric Laporte, midfielders Ilkay Gundogan, Kevin de Bruyne and Rodri all rested after their grueling Champions League tie in the midweek. Some of them are expected to return to the starting 11 on Wednesday night, with Ederson a guaranteed starter after back-up goalkeeper Zack Steffen’s calamitous performance at Wembley. Kyle Walker missed out on the FA Cup semi-final with an ankle injury, and he is a huge doubt for Brighton’s visit. However, Pep Guardiola’s side have no more injury concerns for now as they head into the final run of games.

Brighton & Hove Albion could be without Tariq Lamptey who was subbed off against Spurs with an injury, and remains a slight concern ahead of the game against City. He will face a late fitness test in a bid to get into the starting 11. Jakub Moder and Shane Duffy are the only two players definitely ruled out for Graham Potter’s side, with both nursing long-term injuries. Steven Alzate is a huge doubt after coming down with an illness, and it remains to see if he can recover in time to be selected in the travelling squad to Manchester.

CAN THE SEAGULLS SHOCK THE CHAMPIONS?

Brighton & Hove Albion shocked North London in the last two weeks, winning both times as they dented Arsenal and Tottenham’s top 4 hopes. Both clubs are in a very tight battle with Man United and West Ham United for the 4th league spot, and any slip up could be detrimental at the end of the season. Brighton were expected to roll over for the vastly superior teams, with world-class players all over the pitch, and the Seagulls surprised both clubs with some outstanding football.

The pressure is high at Man City right now, with any points dropped could potentially mean handing over the title to Liverpool. City squandered a 14-point lead midway through the season, and the title race is now set to go down to the wire. Brighton & Hove Albion could play a very unexpected role in the title race, especially after their wins in the capital.

While Man City are still the overall favourites heading into the tie, Pep Guardiola and co. will be wary of the threat that the Seagulls pose. Brighton have a very good away record, losing only 3 out of 16 games so far this season. They have improved defensively over the past few weeks, and the likes of Tariq Lamptey, Marc Cucurella and Lewis Dunk have been exceptional. There is a huge gulf between the quality of both squads, with City also having a superior squad depth. It is a battle of David vs Goliath, but Brighton have nothing to lose and City have everything to lose, meaning that the pressure is more on the hosts than the visitors. It will be a fairytale for the Seagulls if they manage to add City to their list of high-profile victims, and only time will tell who will come out on top in this intriguing battle.

The Belgian playmaker has not been at his very best as we have seen over the past few seasons, with injuries and coronavirus hampering his start to the Premier League season. However, de Bruyne has performed when it matters for City, scoring in big games against the top six clubs. KDB has scored twice against Liverpool, twice against United and once against Chelsea. He has been Pep Guardiola’s most reliable player in recent years, and with 11 goals and 3 assists, this season has proved he can be there for the team even when he’s not in his best form. He will be needed to break down the stout Brighton defence on Wednesday night.

Talking about signings, one cannot just ignore the business by Brighton as they landed one of the finest full-backs in form of Cucurella. The Spaniard has been fairly impressive for his squad and was in the headlines after the game against Arsenal. While the Brighton fans were full of praises as Cucurella was fairly well against Saka and made some impressive defensive contributions which included 13 ball recoveries, Arsenal fans still are ranting about him playing Martinelli onside. Cucurella’s versatility has helped Potter a lot as the Spaniard has put in a shift as the third center back in Webster’s absence and now might be moving to his favoured left side where he will have the freedom to attack. Holding on to Kulusevski will be key to stopping Spurs from hitting on counters, and Cucrella’s presence will be key to stop Tottenham from outrunning the Brighton defence