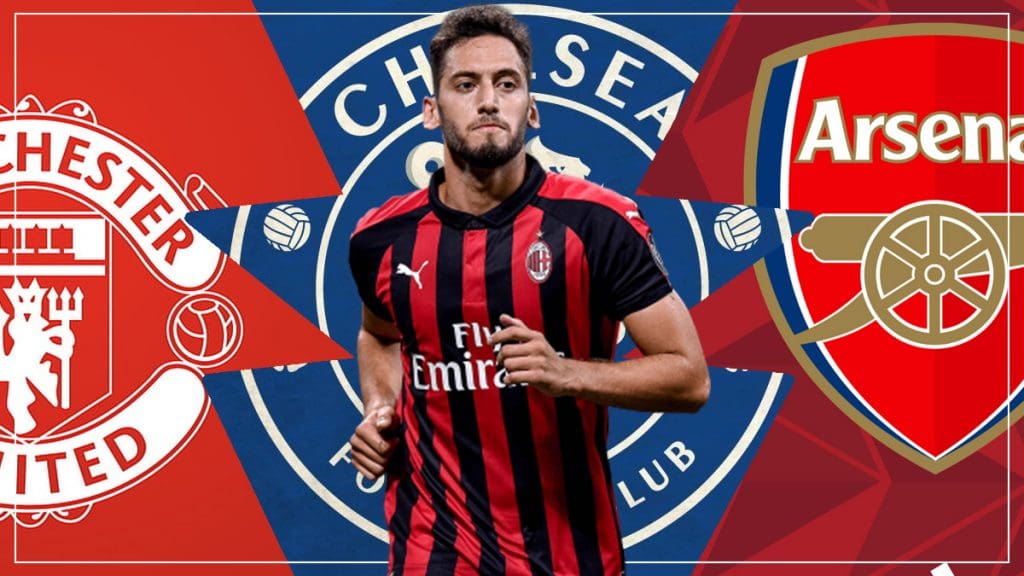 There are some players who have always had transfer rumours surrounding them for good and bad reasons. Sometimes, it is because a club is ready to offload the player, or sometimes the player has outgrown the club. However, the more rare occasion is when a player possesses a skillset that most clubs find attractive and would want the player the second he is available in the market. Such is the case with Turkish winger Hakan Calhanoglu.

The Turk has often been subject to transfer bids since his Bayer Leverkusen days and continues to be linked with Premier League clubs at AC Milan, the club he joined for £21 million in 2017. This season, the Turk has had a hand in 18 goals with 8 assists in the Serie A, as only Alvaro Morata at Juventus has more with 9 to his name.

However, with Çalhanoğlu’s contract up this summer, and with Manchester United, Arsenal, and Chelsea all linked with the 27-year-old, let us see which team will the Turk suit the best.

Manchester United reportedly wanted Çalhanoğlu in the January window itself but with AC Milan quoting the winger’s price at £30 million, it seemed unjustified for United to spend so much for a player who would be available for nothing in the summer. Going by performance analysis and United’s squad strength, Çalhanoğlu suits the needs of the club but does not match the style.

Manchester United are a counter-attacking side under Ole Gunnar Solskjaer and while the Turk has the pace to cope with it, he does not match the skill set required to play the role Ole would want him to. Çalhanoğlu has played as an attacking midfielder as well as a left-winger for AC Milan this season and his strengths lie in crossing the ball and cutting inside on his favoured right-foot to unleash shots.

United’s requirement, however, is a starting right-winger as Bruno Fernandes and Marcus Rashford have already occupied the attacking midfield and left-wing positions respectively. While Mason Greenwood was playing on that wing last year, he has been shifted towards the center this season leaving that slot vacant for youngsters like Amad Diallo and Shola Shoretire.

On the right, the Turk will not be able to cut inside on his favoured foot while you cannot cross the ball in this United team as they prefer playing with Anthony Martial up-top and the Edinson Cavani is the only other striker who is a good header of the ball, but it remains to be seen whether the Uruguayan will be at the club next season.

Moreover, Çalhanoğlu’s most adept quality is set-pieces and Bruno Fernandes is already the main set-piece taker at the club. While the 27-year-old will make a great back-up to any of the forwards, he might be eyeing a bigger role and United might not be able to provide the Turk that currently.

Verdict: Does not match the style of the club plus would not find a place in the starting line-up even if he got accustomed to the style.

Speaking of needs, Arsenal have several and Hakan Çalhanoğlu is certainly one. Arsenal lack a goal threat, a technical dribbler on the ball, and somebody who can keep creating out of wide positions. Nicolas Pepe and Buakyo Saka, both aren’t wingers by nature and Çalhanoğlu can provide the Gunners with a different approach to games.

Mikel Arteta, since he arrived in 2019, has been trying to play Alexandre Lacazette through the center while Pierre-Emerick Aubameyang has been shifted out to the left and this hampers Arsenal more than it helps them. Arsenal looked helpless on the weekend against Liverpool and while they were missing Emile Smith-Rowe and Bukayo Saka, there is something wrong with the club when your two best players have just crossed the threshold of adulthood.

Çalhanoğlu can improve Arsenal in several areas. The winger can be the creative hub on the left-hand-side while he can also form a dangerous partnership with Kieran Tierney, Arsenal’s marauding left-back. The Turk is averaging an 84% pass completion rate while he has also managed 3.5 shots per game this season.

However, the most important stat of the Turk is that this season, he has averaged 3 to 4 key passes a game and Arsenal are in desperate need of somebody like the 27-year-old. Moreover, on a free transfer, Arsenal would welcome the player with open hands as they would not mind paying a high salary if they offload a couple of players this summer.

If there’s one club in England that does not need any more depth in the winger slots, it is Chelsea’s. The Blues went ballistic in the transfer market last summer, as they went on to bring Kai Havertz, Hakim Ziyech, Timo Werner to a Chelsea side that already had the likes of Mason Mount, Callum Hudson-Odoi, and Christian Pulisic.

This is a side that can do without signing a winger for the next 5 years, let alone this summer. However, it would be interesting to see what Çalhanoğlu can provide this side with. Chelsea, this season have been far from perfect and their game against West Brom on the weekend clearly showed how much creativity this team was lacking. It took Mateo Kovacic to make tireless runs and provide countless through balls for Chelsea to come up with a single goal to West Brom’s 3 in the second half.

If the existing crop of players were not present at the club, the Turk would be a fearless forward under Thomas Tuchel. Cutting inside from the left, delivering deadly crosses, and taking long shots is a quality a lot of Chelsea players have but none use them as good to their advantage as Çalhanoğlu.

The Turk’s aforementioned 3 to 4 key passes would also be a huge help to a player like Werner who likes playing off the shoulder of defenders and has often been frustrated due to Chelsea’s slow build-up play.

However, with a bunch of players vying for the winger roles at Chelsea, Çalhanoğlu might be restricted to the bench more often than not and at 27, the Turk might have higher ambitions.

Verdict: Suits the way Tuchel plays but would be restricted to the bench due to an over-crowded squad.