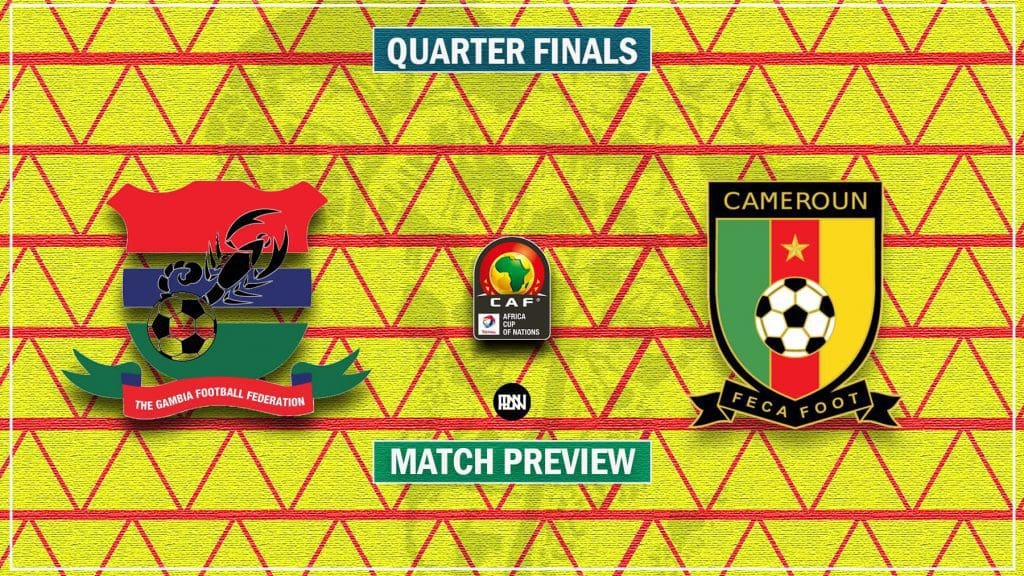 Since the inception of the Africa Cup of Nations, 44 teams have competed in the tournament and one country is yet to taste defeat during that time. The country? The Gambia!

The Scorpions will be defending their pride once again on Saturday, January 29, when they play the host nation, Cameroon in the quarter-final.

The Gambia have had a fairytale in the competition so far in what is expected to be their debut campaign in the continental showpiece. Two wins in three group stage matches were followed with a deserving win over Guinea in the round of 16 as they secured a place in the last eight.

Playing as the host nation, Cameroon have done almost everything right in the tournament but they almost suffered a scare against 10-men Comoros in the last 16 stage earlier this week. Just like the Gambia, the Indomitable Lions have also failed to win just one game, a draw against Cape Verde in their final group game.

Cameroon have scored nine goals in four games so far in the AFCON so far including four in the game against Ethiopia. Their strong form in front of goal has been attributed to the decisiveness of the attacking options.

The Gambia, on the other side, have conceded just once in the whole tournament, coming in their second game against Mali.

It will be interesting to see how the best attack in the competition comes up against one of the best defence in the tournament.

Tom Saintfiet will be without the services of midfielder, Yusupha Njie after he was sent off in the clash against Guinea. The Boavista man was shown two yellow cards before receiving his marching off orders from the referee. Winger, Ablie Jallow could also miss the encounter following his substitution in the 63rd minute of the last game after picking up an injury. Baboucarr Gaye looks to have cemented the goalkeeper’s spot and that means  33-year-old Modou Jobe will be on the bench once again.

For Cameroon, no injury casualties have been recorded after the round of 16 win over Comoros. Toni Conceicao started Eric Maxim Choupo-Moting in the last game but the Bayern Munich forward is unlikely to be in the starting line-up for the clash against the Scorpions. The gaffer is not expected to make too many changes to his starting line-up.

Gambia have earned the respect as one of the best teams in the tournament, not only for the results they have achieved but also for the way they have played across all their games. Saintfiet’s men have restricted their opponent’s to limited opportunities while they have also made the most of the chances that have come their way.

Cameroon are a bit different compared to the sides Gambia have played so far in the competition. However, in a tournament that never ceases to amaze, Gambia have it all to play and they could be through to the semis.

The Indomitable Lions are also hoping for a host-and-win but the quarter-final stage will be too early for such a dream. More works lie ahead for Samuel Eto’o’s boys but nothing is impossible in this spot.

Cameroon are more suited to playing and creating from the middle of the park. Up against a team that puts more men in the middle, the host nation will need to find a skimmer who will be able to create space and work things out even off the ball.

Magpies ‘open talks’ for Spurs midfielder Dele Alli
Sofyan Amrabat – How does he fit into Conte’s plans?
To Top