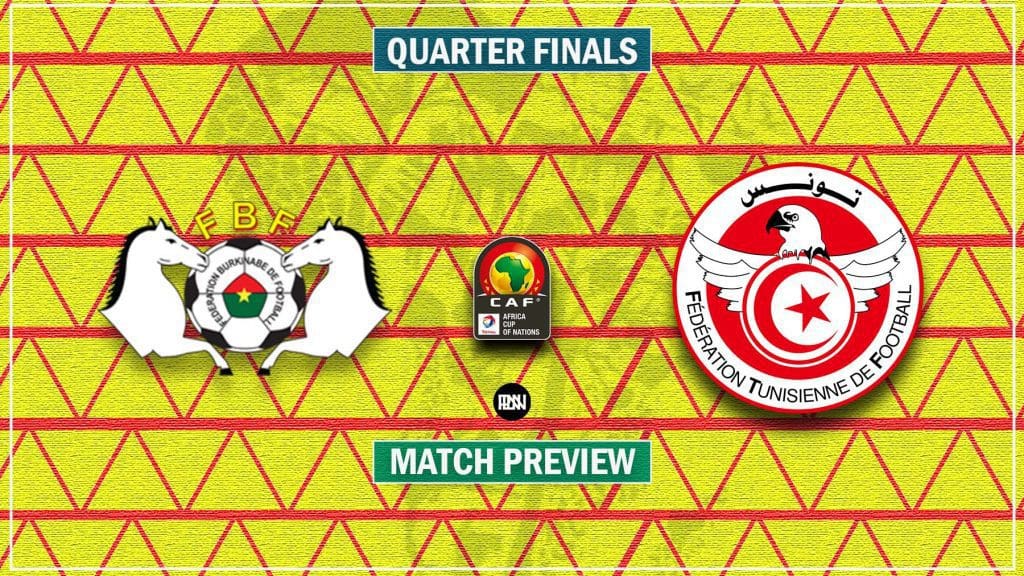 After beating Gabon through a penalty shootout, Burkina Faso would be put to face another tricky test when they come up against the Cottage Eagles of Tunisia in Quarter Finals in the ongoing Africa Cup of Nations tournament.

This match promises to be a tough one as the tournament has provided football fanatics around the globe with highly competitive and good football.

Tunisia made a statement to the whole world after beating the Super Eagles of Nigeria one goal to nil in the round 16th encounter. Youssef Msakni’s low, swerving shot  provided the only goal in that match

They are massively determined and confident to edge past Burkina Faso in the quarterfinals.

Burkina Faso are looking forward to booking a ticket to the Semi-Finals of the competition and a win against Tunisia will see them through.

Bertrand Traore who suffered a minor knock in the game against Gabon is fit to feature in this showpiece. Injuries and Covid-19 concerns have yet not been emerged in the camp of Burkina Faso. All players are eligible and fit to play in this clash

Tunisia was without their Head Coach Mondher Kebaier in the game against Nigeria due to Covid-19. His availability in this game would depend on a medical clearance from CAF health officials before the game. No injury concerns have been recorded yet in camp.

Burkina Faso is most likely to set up in their normal 4-2-3-1 formation, playing a double pivot to protect the back four and also control the game. They would be expected to see much of the ball as 3 attacking midfielders will be in front of their double pivot to create a lot of chances for the lone striker in the attack.

It is most likely Tunisia would go into the game with their normal 4-3-3 formation but be more defensive-minded this time around and will be looking for counter-attacking opportunities as they did against Nigeria in the Round 16th clash. Being solid at the back will give Burkina Faso no chance of creating a lot goal scoring opportunities.

Bertrand Traore who plays for Aston Villa is one player you cannot certainly overlook in this showpiece. He was on target against Gabon in the round 16 clash. The 29-year old plays wide as an attacking midfielder and has an eye for goal and chance creation. He’s very efficient on the ball and dribbles very well. His presence in the game would help his team create a lot of chances and possibly win a lot of set-pieces for his side. He’s a very good set-piece specialist too.

Hannibal Mejbri is a young lad many would be paying attention to. The teenager who plays for Manchester United is adapted to playing on the wings, as a No10 and even as a deep-lying playmaker. His presence in the game would help Tunisia to create goal-scoring opportunities. Given the opportunity on Sunday, the 21-year old would cause problems for his opponents. While Tunisia also got Arsenal starlet Omar Rekik on the bench – he can prove critical off the bench on the defensive side of things if they want to calm the game down and see it off.