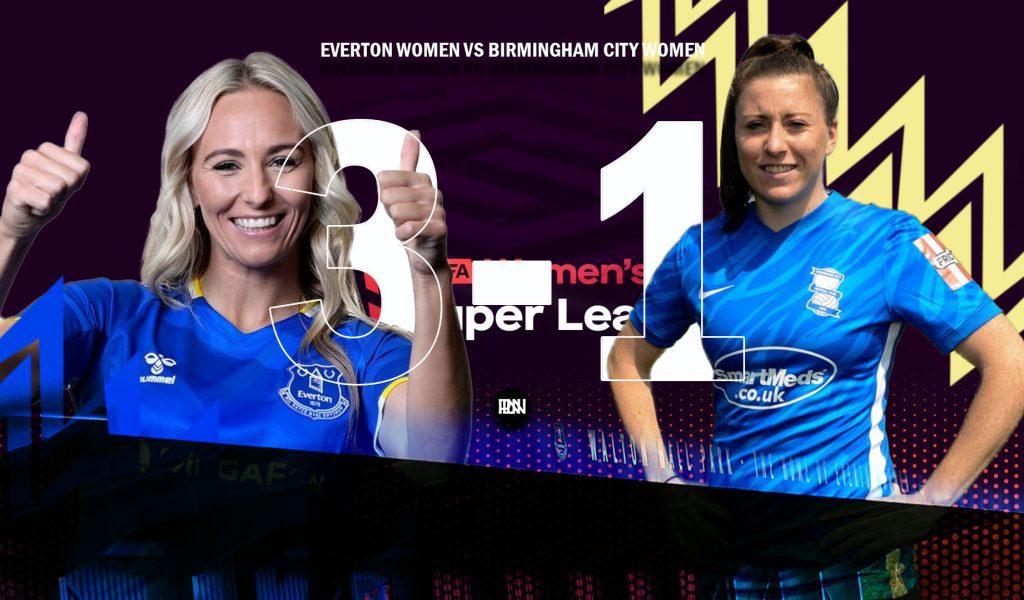 A match report of the return of the WSL following an international break, with Everton collecting their first 3 points after beating Birmingham 3-1 at Walton Park.

Both teams start in a 4-3-3, and with Everton’s squad being miles ahead of Birmingham’s on paper, I’m sticking with a 2-0 win for the Toffees. Valerie Gauvin remains on the bench, but with Toni Duggan and Kenza Dali starting today, I can see a comfortable match for Willie Kirk’s side.

Leonie Maier makes her first appearance for Everton today, as she replaces Nicoline Sørensen at right back. The soon-to-be 29-year-old joined Everton on a free transfer after Arsenal decided to not extend her contract following an average season from the former Bayern Munich right back. A positive switch for Everton, and also for Leonie herself.

Leonie Maier scores her first goal for Everton on her debut! After quick progression up the field, Christensen attempts to shoot, and a goalmouth scramble is created. So when the ball falls to Leonie on the edge of the box, she has the time and space to shoot and score. And crazily, after never scoring for Arsenal in her 3-year spell at Meadow Park, it’s also her first WSL goal which puts Everton 1-0 up.

While for the visitors, Jade Pennock’s off the mark as well! After receiving a ball on the edge of the box, she takes the ball away from the defender and smashes it into the left-hand side of the goal. A brilliant goal that puts the Blues level!

It was a comfortable first half for Everton, with the Toffees maintaining possession, having more shots, and playing more passes than Birmingham. However, since they went behind, Birmingham have been the better side. No changes from Birmingham, as Scott Booth doesn’t seem to think anything needs to change, with his side being better going into the break, but there is a change for Everton, as Hanna Bennison enters the pitch with Galli going off.

Super-sub Bennison! What a strike!! Another strike from outside of the box and this is probably the pick of the bunch. The third goal from a new signing, Hanna strikes the ball into the top left corner for her first in an Everton shirt. A brilliant goal which may prove to be the winner for Willie Kirk’s side, with less than 30 minutes to go. 2-1 Everton. After a 90+7 minute assurance goal from another substitute (Rikke Sevecke), Everton have collected the 3 points. Another goal for a new signing! Christensen delivers a cross and Sevecke is the highest to head Everton closer to the three points.

A needed win for Everton and a comfortable win, despite what the scoreline (for the majority of the game) suggests. With around 66% of the possession, double the shots and passes, as well as generally playing calmly, the 3 points were finally locked up when Rikke Sevecke scored an injury-time goal for Everton. A brilliant match for the Toffees, as they collect their first points of the season. And it finishes Everton 3, Birmingham City 1.