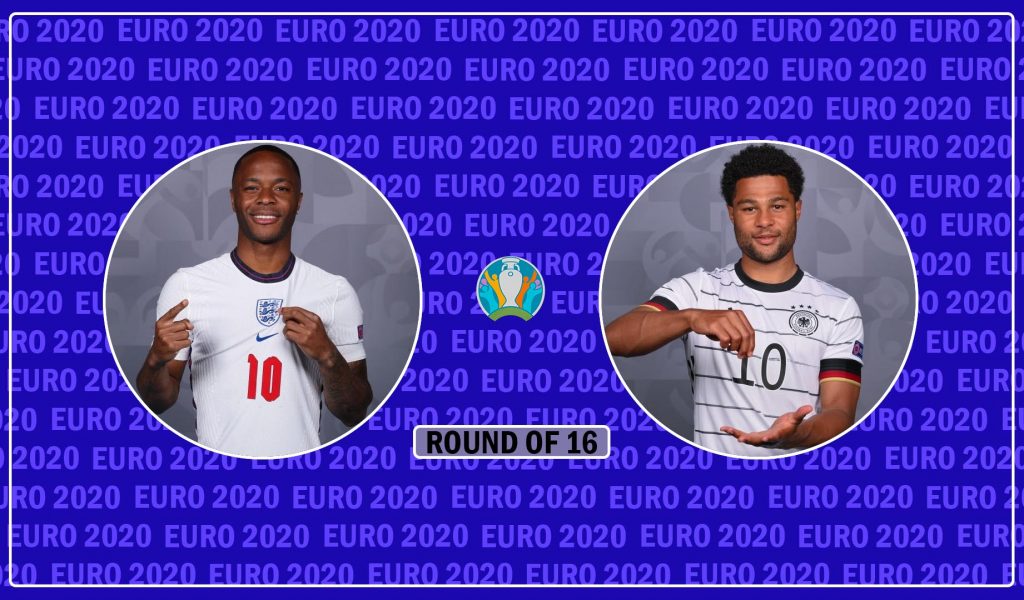 When England takes on Germany in their Round of 16 match at Wembley on Tuesday, a place in the UEFA Euro 2020 quarter-finals will be on the line. With the Round of 16 stage practically completed, the serious business at UEFA Euro 2020 is about to begin. However, there are only two more games on Tuesday before the first knockout round concludes, and we will have our eight quarter-finalists. The day’s opening encounter will take place at Wembley Stadium, with England taking on Germany.

England qualified for the UEFA Euro 2020 Round of 16 after winning Group D and being one of just seven teams to go undefeated in the group stage. Even better, the Three Lions are the only team in the tournament that has yet to concede a goal. However, Gareth Southgate and his team have struggled to score goals in the attacking phases, scoring just two goals in three games.

Germany, on the other hand, was assigned to the group of death, so it’s no surprise that they had a roller-coaster ride to the Last 16 stage. After losing their first game to France, Die Mannschaft fought back to defeat Portugal in a convincing manner before finishing second in Group F with a 2-2 draw against Hungary, setting up a Round of 16 meeting with England.

England and Germany enjoy one of the most illustrious rivalries in European football, although their most recent friendly encounter ended in a goalless draw in 2017.

Gareth Southgate’s preparations for the UEFA Euro Round of 16 match against Germany are not being hampered by any new injury concerns. After missing the final group game, England boss Roy Hodgson will have a fully fit squad to pick from on Tuesday. Mason Mount and Ben Chilwell will be available.

Mount will return to the starting lineup in the attacking setup, replacing Jack Grealish in the no. 10 position. The young midfielder will partner captain Harry Kane, who will lead England’s attack against Germany in a desperate attempt to reverse their fortunes following a disastrous group stage.

Under Gareth Southgate, Raheem Sterling is a must-have for England, and after scoring both of the Three Lions’ goals so far, the 26-year-old is an easy choice on the left wing. Bukayo Saka will look to preserve his spot on the right wing after a strong performance against Czech Republic last time out, with Phil Foden again missing out.

Despite Jordan Henderson’s availability, Declan Rice and Kalvin Phillips remain indispensable in the midfield double pivot. Phillips will be the park’s workhorse, frequently charging forward to press in advanced areas. Rice, on the other hand, will take a deeper position and try to pull the strings for England.

Finally, following Harry Maguire’s strong return to action, the defensive unit is unlikely to be changed, which means Tyrone Mings will be out for the second game in a row. England’s defence will be led by John Stones and Maguire, with Luke Shaw and Kyle Walker serving as full-backs. Finally, Jordan Pickford in goal cannot be overlooked.

Joachim Low, like his England counterpart, has a full-strength squad at his disposal for the UEFA Euro 2020 Round of 16 match. Matthias Ginter, Ilkay Gundogan, Joshua Kimmich, Kai Havertz, and Leroy Sane are all in danger of missing the next game if they are booked, thus Germany’s head coach will be sweating about the suspension issue.

While Sane will not start for Germany, the rest of the squad is crucial to Low’s success and will need to be at their best to get through the game against England. With Germany lining up in a 3-4-3 shape in front of the captain, Manuel Neuer will occupy his usual slot between the sticks.

Ginter will be part of a three-man centre defensive unit that includes Mats Hummels and Antonio Rudiger at the back. Toni Kroos, the 31-year-old midfielder, will be charged with maintaining Germany in control of the game, with Ilkay Gundogan providing support.

Gundogan, on the other hand, will take a more defensive approach to the game, allowing Kroos to shine. Joshua Kimmich and Robin Gosens are certainties out wide, with the duo combining to form the most terrifying wing-back partnership at UEFA Euro 2020, thanks to their incredible delivery output.

Finally, Thomas Muller, Kai Havertz, and Serge Gnabry will all retain their positions in the side in attack. Muller will play false nine again, and his movement will pull Havertz and Gnabry into the game. The youthful strikers will look to swerve infield on a regular basis, but they will need to work on their end product against a disciplined England defence.

Aaron Ramsey would be a statement signing – But can Crystal Palace afford him?
Eduardo Camavinga: Why are Manchester United keen on signing him?
To Top