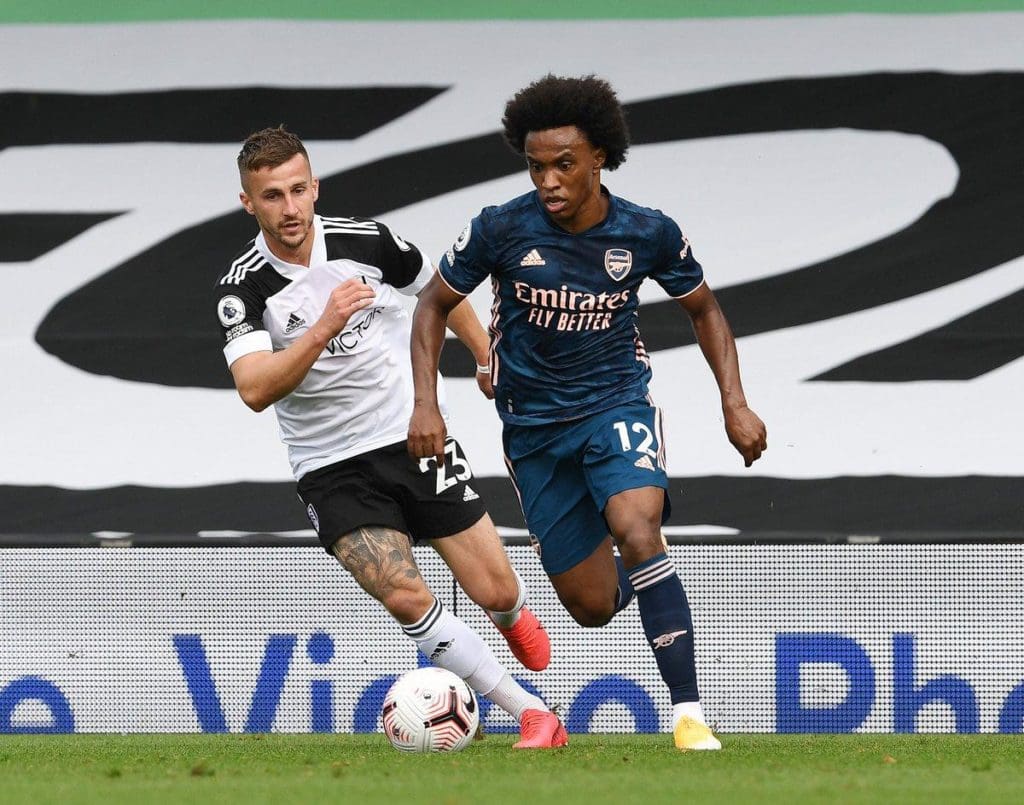 Willian was one of two players who made their competitive debut for Arsenal on Saturday in their Premier League opening game against Fulham.

The Brazil international helped the north London outfit to a flying start to their 2020/21 campaign, beating the newly promoted side by three goals to nil.

Willian completed his move from to Arsenal last month from Chelsea on a free transfer after seven years at the Stamford Bridge, and was named in the starting XI against the Cottagers.

The selection proved to be one that had many voicing out their concerns considering the club’s record signing Nicholas Pepe was restored to the bench.

And the former Chelsea winger justified the reason why Mikel Arteta picked him over the Ivory Coast international, assisting two of Arsenal’s goals over the weekend.

Willian could have have scored one himself but his strike from a first half free kick struck the woodwork before eventually been cleared.

The 32-year-old was a constant threat for Fulham’s defence throughout the course of the game, with his pace and trickery.

However, his performances did not only impress the fans of Arsenal, with some supporters from his former club also seen to have followed proceedings as the player enjoyed a fine afternoon.

Here is what some supporters of the west London side said about Willian on social media:

Willian usually does his bit in games and admittedly has some poor games time and often.

It’s just we as Chelsea fans hounding him at every corner and eventually creating this stigma or stereotype of hate which is just sad for a player who served for 7 years.

I think he is simply carrying on from where he left last season. He is a good addition to Arsenal no doubt specially that Arsenal look to be playing on the counter this season

No doubt willian is a good player. Chelsea wanted to keep him but he made it difficult for the board by asking for a 3 years contract. Now playing for Arsenal. No regret for #CFC on their decision, we move!

Despite his performance today, I really couldn’t be happier that we’ve upgraded Willian to Ziyech/CHO to be honest. Thanks for the memories.

For me he remains the most frustrating player to play for #CFC – capable of producing like he did today, but rarely consistent in doing so

Consistency is just his problem, we all know william is top class

I come back home and Willian turns into prime Ronaldinho, Gabriel gets a goal on his debut and Lacazette scores away from home? 2020 is wild man

You know what, knowing our luck I won’t be surprised if Willian turns into prime Ronaldinho at Arsenal and challenges for the Ballon d’Or.

Willian couldn’t beat his first man from corner kicks at Chelsea. Joins Arsenal and assists from his first ever corner kick and assist Aubameyang again. Man needs jail time for this. 😂 😂