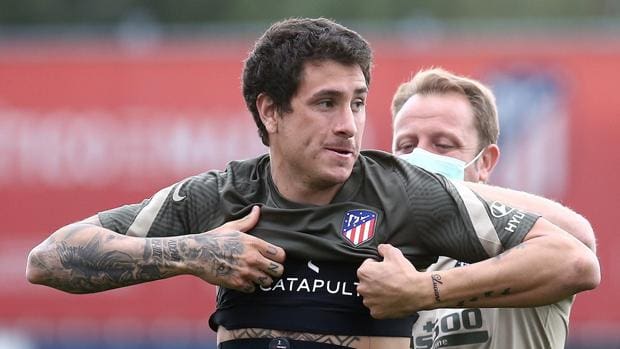 Atletico Madrid defender Jose Gimenez would not be part of the Champions League squad due to another injury.

The Champions League was back last Tuesday, and it provided some memorable games with Kylian Mbappe scoring a hat-trick at the Camp Nou, while Erling Braut Haaland scored a brace as Borussia Dortmund secured a crucial 3-2 away win against Sevilla. These players made the difference for their team as both PSG and Dortmund defeated Spanish oppositions, something Chelsea will also be hoping to do when they go up against Atletico Madrid in their round-of-16 tie in the Champions League.

Atletico recently lost to Levante 0-2 at home, and the bigger loss was the injury of Jose Maria Gimenez – as the Uruguayan limped off after 20 minutes, catching his ankle which looked like a worrying sign for Diego Simeone and Atletico Madrid. Jose Gimenez was not looking like he was going to make it for the tie against Chelsea, but he recovered quickly and was fielded against Levante, unfortunately, the knock looked serious and it will be some recovery if the Uruguayan defender is fit to play against Chelsea.

Embed from Getty ImagesThomas Tuchel’s men will be delighted with this news, as Gimenez has been Atletico’s standout defender this season and has been a focal reason for them conceding only 16 league goals this season. Chelsea recently drew 1-1 against Southampton, but it must have given them a boost as they saw Atletico lose at home, which has been an incredibly rare occurrence this season.

They already goes into the game with a subtle advantage, as Atletico are not able to play their home game in Madrid, as Covid-19 rules have restricted the entry of foreign teams on their soil. So, Chelsea and Atletico, both will travel to Bucharest for the first tie and the neutrality of the venue could give a lot of confidence to Chelsea as they look to reach the quarterfinals of the competition after 8 years, as the English side last reached this stage of the competition in Jose Mourinho’s first season of his second stint at the club in 2013/14.

HOW CAN ATLETICO SET UP WITHOUT JOSE GIMENEZ?

Atletico will look to set up with a 3 at the back with Felipe, Hermoso and Stefan Savic, assuming Savic returns by Monday which looks highly likely as the Montenegrin is a very able deputy and can provide a strong backline as Diego Simeone will look to keep a clean sheet in the first leg.

Saul could also return for the tie, as he will return to his midfield position alongside the ever-reliable Koke, with Lodi or Carrasco providing the width in the left wing-back position. Marcos Llorente will continue to act as the right wing-back while the front 3 of Correa, Felix and Suarez will remain unchanged as Simeone will hope that with the experience of Suarez and with the youthful creativity of Felix, they can cause several problems to the Chelsea backline.

Diego Simeone will expect a clean sheet out of his team and will look to the likes of Koke and Saul to control the tempo of the game and protect the backline effectively.

HOW CAN CHELSEA HURT ATLETICO?

Chelsea will look to hurt this Gimenez-less Atletico defence, as they would be very aware of Savic’s lack of pace and will look to cause problems down on his side. Chelsea could field Mason Mount, Timo Werner and Hudson Odoi as their front 3, however, if Christian Pulisic and Tammy Abraham return after their not-so-serious-knocks this weekend, Tuchel could opt for them as both Pulisic and Abraham are very able runners behind the defensive line.

Tuchel will look to shore up his defence and might also opt for Reece James and Ben Chilwell in the full-back positions as they can provide a lot of cover to the back 3 as well as relentlessly run down the wings to provide the width to Chelsea’s attack. Jorginho and Kovacic might sit in the double pivot, in the central midfield zone, but there would be no surprises if Kante is put into the team after his incredible performance against Southampton where the midfielder was back to his best as he intercepted every ball that came his way and led Chelsea’s press on almost every occasion.

Thiago Silva might also return for this game which will be good news for Thomas Tuchel as Chelsea look at a much more solid defence with the Brazilian at the center of it alongside the likes of Azpilicueta and Rudiger.

The game on Tuesday night is certainly a mouth-watering tie, and both teams will approach the game very differently, as the ideologies of the two clubs and the two managers could not be more different. Chelsea will look to penetrate the Atletico defence, as Atletico will look to break on the counter with their fierce frontline.

Atletico Madrid would be favorites but not by a big margin, as Gimenez’s injury gives Chelsea an extra incentive, and Thomas Tuchel and co will certainly look to bring back a lead to Stamford Bridge.

The Newcastle﻿ Preview: How will Magpies fare at Old Trafford?
Ivan Toney: The Brentford striker Leicester City are keen on
To Top