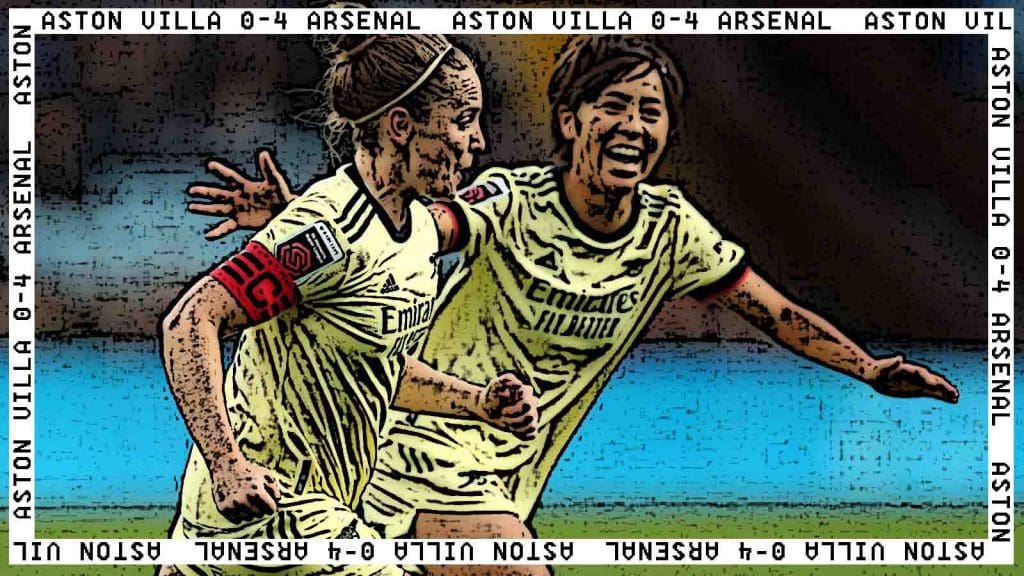 Arsenal Women traveled to Birmingham to face an Aston Villa Women who had started the season unbeaten in their first 3 games. And with Chelsea Women claiming the top spot after a 3-1 win vs Brighton Women, would Arsenal regain their spot at the top? Find out that and more in today’s match report.

The hosts were looking to continue their unbeaten start to the season against the Gunners. Carla Ward has made 3 changes to her side, with Emily Gielnik and Sarah Mayling (who both featured in the starting 11 last week) both left out of the matchday squad. Alisha Lehmann returns to the team, after not featuring in the win against Brighton.

After a 1-0 win against the Seagulls, Carla Ward made sure that fans understood her thoughts saying, “We’ve still got work to do, we’ve got to keep improving. We have to build on it. We have to keep ourselves grounded.” The manager, who described herself as a “big kid” in an interview sure won’t be looking for childish mistakes against a team as ruthless as Arsenal have been.

The visitors were eyeing up their 17th straight win and were also looking to climb back up to the top of the WSL ladder, after being knocked off indirectly by Chelsea earlier in the afternoon. And with a team of Arsenal’s quality, you could see why some Gooners weren’t worried about Aston Villa. Jonas Eidevall has made 7 changes from their last match, which is expected as the match in question was a cup match. Something to speak about is that Leah Williamson was left out of the starting 11, with Jonas Eidevall potentially preparing for a Leah-less defence with rumours that the 24-year-old will move into a defensive midfield role.

Well. Arsenal weren’t terrible in the first half, but they hadn’t been great either. Don’t get me wrong, they were the better team, but that flair and spark that Arsenal seem to have wasn’t there. The Gunners were missing that creative but practical player, somebody like Tobin Heath or Mana Iwabuchi. The former player was brought on from the bench during the break, with Frida Maanum’s game coming to an end.

Arsenal eventually took the lead through Kim Little, who just scored her 150th goal for the Gunners with a classy finish from the edge of the box (it even nutmegged a player on the way in!). Overall, a brilliant achievement for a player as brilliant as Kim.

Arsenal took a while to get another on the books, but an incredibly nice goal saw Tobin Heath whip in a low cross which Mana slotted away to put Arsenal 2-0 up against her former side.

A fantastic goal with pinpoint accuracy, Katie McCabe reads Hannah Hampton’s pass as a book, so she intercepts it and with the goalkeeper of her line, takes a dinked shot which ends up in the back of the net.

Arsenal scored another goal in extra time, which made it 3 in 12 minutes. Kim Little scored her 2nd of the night after a shot got deflected off Meaghan Sargeant and lobbed over Hannah Hampton. And the Gunners’ late goal-fest means they have now scored 3 or more goals in their last 10 games. That may end against Barcelona next week, but enjoy it while it lasts right?

A game which was dominated by the Gunners is rightfully won by them as well. Jonas Eidevall’s side had 77% possession and 22 shots, with 11 of those going on target. A good match for Arsenal, and a disappointing match for Aston Villa, with the scoreline not truly representing how they performed in the match. Something which gained a lot of attention on social media after the match was one Carla Ward quote, with the Villa manager saying, “I think this is the best Arsenal side I’ve seen in the last ten years.” Many will agree, some will disagree (in all fairness the 2011/12 side was quite good) but one thing is for sure, it ends Aston Villa 0, Arsenal 4.