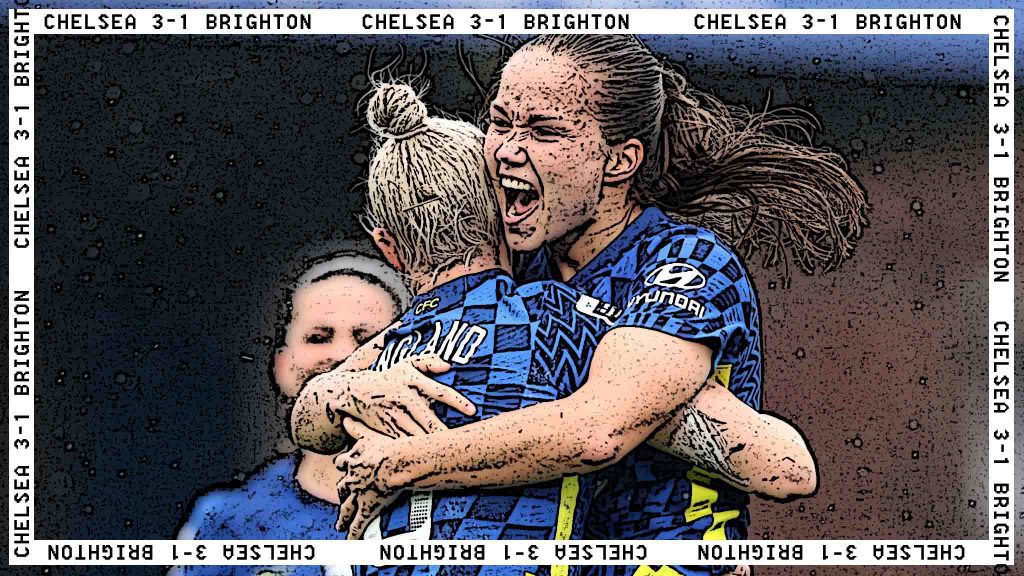 Chelsea Women makes it 4 in 4 after comfortably beating Brighton & Hove Albion Women 3-1 at Kingsmeadow. Find out more in the match report below.

Chelsea were looking to avenge their 2-1 defeat to the Seagulls in February and with one of their strongest lineups out today, they had a good chance of doing just that.

Brighton were looking to bounce back from a 1-0 defeat against Aston Villa, but against the reigning WSL champions, that was easier said than done.

The Blues took the lead after an early goal from Guro Reiten. A quick throw-in from Cuthbert allowed Pernille Harder in behind the Brighton defence. Afterward, the ball broke to Kirby and she put it on a plate for Guro Reiten, who took one touch before firing the ball into the Brighton net. 1-0 Chelsea.

It took a while, but Chelsea added another via Samantha Kerr. With halftime closing in, Sam Kerr nodded home Chelsea’s second of the game and put the Blues two ahead before the break.

By this point, Chelsea had dominated the match and Brighton had sat back and attempted to absorb the pressure, which didn’t work. Hope Powell’s side looked lethargic at points during the first half, and Chelsea had capitalised. The Brighton manager did make a change though, with former Bristol City player Danique Kerkdijk leaving the pitch after being replaced by Emily Simpkins.

Almost instantly after the break, Whelan dribbled past 2 defenders to slot the ball through to Carter, who was relatively unmarked. She took a touch before sweeping past Ann-Katrin Berger, scoring with Brighton’s first effort on target.

The substitute secured the 3 points for Chelsea in the 80th minute, with the England international scoring her 50th WSL goal. That makes her the 3rd player to do that in WSL history, after the footballing legends that are Ellen White and Vivianne Miedema.

A solid performance from Chelsea, and a performance which I don’t think that Brighton will be too mad about either. Both teams came here knowing that Chelsea were the favourites, and out on the pitch they were the better team. However, somebody did point out to me that I did predict the score right for a change, so I guess that’s good. Overall, predictable performance with neither manager having a sleepless night.