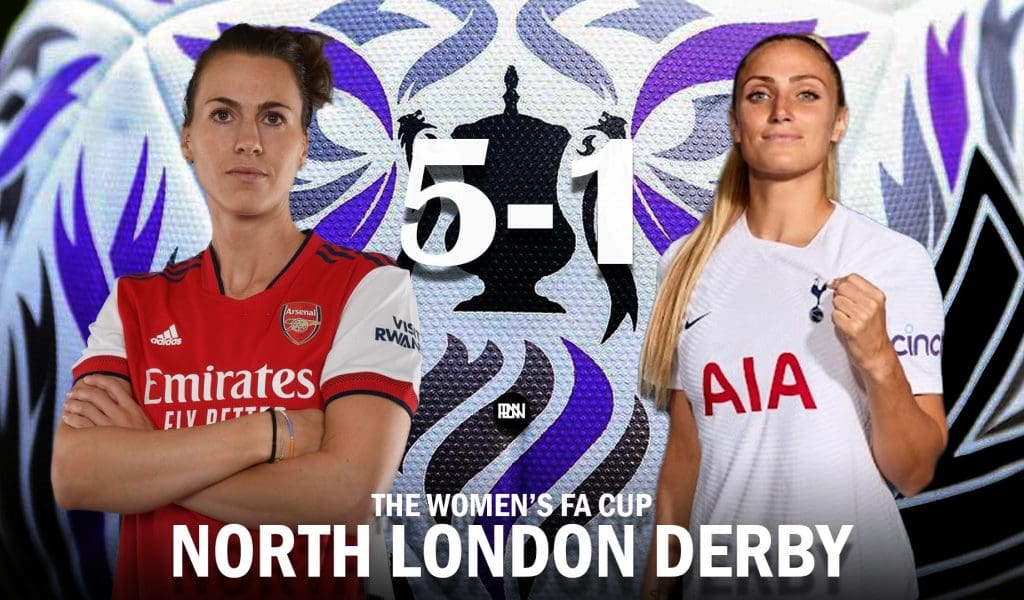 North London’s finest went head to head in one of England’s grandest stages, with Arsenal Women thumping Tottenham Hotspur Women 5-1. Find out more in the match report below.

Arsenal were looking for their 16th competitive win against Tottenham Hotspur on Wednesday, with the likes of Jordan Nobbs and Caitlin Foord rejoining the side, the Arsenal fans were nothing short of excited. Tottenham were looking to avenge a 4-0 preseason loss against the Gunners, and after getting a draw last season in the Conti Cup, they were confident they could get a result with the right performance.

Spurs took the lead after a thunderous strike from just outside the box from Rachel Williams. After a bit of bouncing around, the ball fell to her on the edge of the box and she put Tottenham 1-0 up. A state of shock was a recommended site at the Meadow Park after the Gunners conceded that goal, but the Gunners will definitely regroup from this.

Arsenal got one back fairly quickly, with a brilliant goal from Mana Iwabuchi. The ball fell nicely for Iwabuchi, who nutmegged a defender, took a touch before curling her shot into the top right corner past former Arsenal goalkeeper Becky Spencer.

Just after half an hour, Arsenal were back in the lead. Heath sent a free-kick into the box that wasn’t cleared, allowing Wubben-Moy to power home a shot via a deflection which Asmita Ale inadvertently guided into her own net.

Minutes after the 2nd went in, Arsenal had scored their third Nikita Parris played a one-two with Iwabuchi, beat Ashleigh Neville with ease before firing in a cross into the box which was converted from close range by Caitlin Foord.

At this point, Arsenal were pulling Tottenham apart and added their fourth of the night just before half-time. A corner was headed towards goal by right-back Anna Patten towards Nikita Parris, who headed the ball into the net after Becky Spencer’s missed punch.

A fantastic first half for Arsenal, with that Rachel Williams opener feeling like a lifetime away. Rehanne Skinner made 2 changes at the break, with Ashleigh Neville and Josie Green making way for Kit Graham and Kerys Harrop to enter the pitch. The intensity dropped for Jonas Eidevall in the second half, but with the fixture wrapped up, you can’t blame him for sitting off.

Arsenal scored their fifth goal later than you’d expect into the second half. Beth Mead ran at Ale and somehow picked out Foord who stretched out her leg to score her 2nd and Arsenal’s 5th of the night.

A performance that fans would expect against the Spurs, especially with the quality on the show tonight. Their 21st match scoring a goal, and their 9th scoring 3 or more, Jonas Eidevall has been truly sensational, with 10 wins in his opening 10 games, and maybe a trophy on the 5th of December. However, Brighton & Hove Albion stand in their way between now and the coveted FA Cup final. Spurs will be disappointed with their performance, but they’ll try again vs Leicester in a few days’ time.