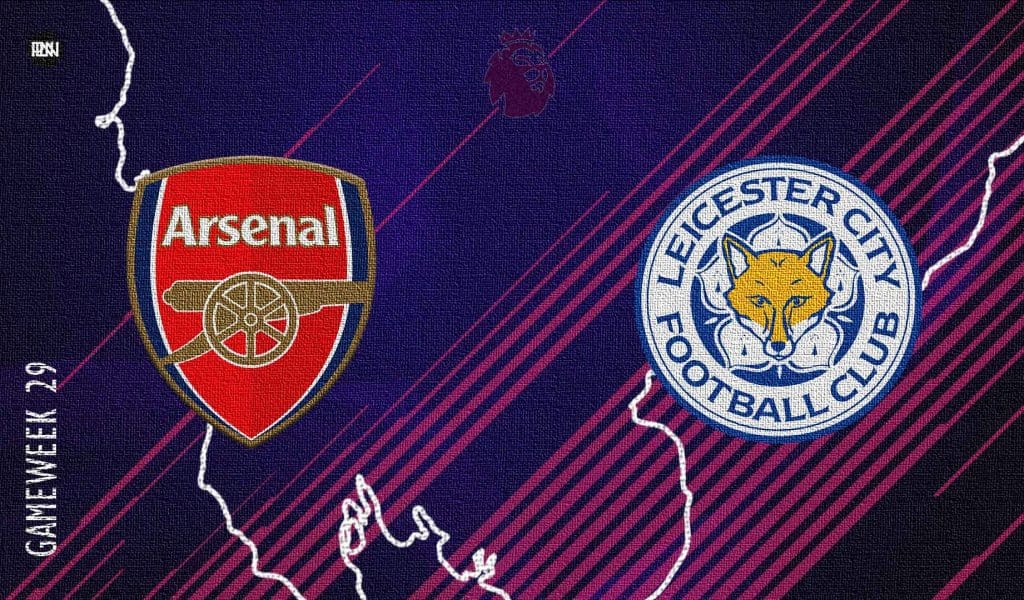 Arsenal will be aiming to consolidate their position in fourth place in the Premier League table when they welcome Leicester City to the Emirates on Sunday afternoon.

Mikel Arteta’s men survived a scare last time out to overcome Watford 3-2 at Vicarage Road, while the Foxes arrive having claimed a 2-0 advantage over French outfit Rennes in the Europa Conference League last 16.

The goal of the day award may have been deservedly claimed by Watford’s Cucho Hernandez, but Arsenal’s young prospects came up with three eye-catching strikes of their own to propel themselves into fourth place after a five-goal thriller against Roy Hodgson’s relegation candidates.

The Gunners remain in fourth place at the time of writing but will likely have dropped down a place before kickoff with Manchester United and Tottenham Hotspur facing off on Saturday evening, but knowing that at least one of their top-four rivals will drop points can only be a good thing for Arteta and his men.

After a difficult start to the campaign, with many people writing their top-four hopes off, Arsenal have now strung together a four-game winning streak in the Premier League – averaging two goals per game in that stretch – but Arteta was less than happy after the Watford win as his side once again won by just a one-goal margin.

Not since the Boxing Day thumping of Norwich City have Arsenal won by more, but a tally of 25 points from their last 10 games is the joint-highest in the league behind Manchester City, and only the champions and Liverpool have performed better at home than the optimistic Gunners this term.

For Leicester City, things may finally be looking up for Brendan Rodgers and his men, after a season of huge inconsistencies, following up their win over Jesse Marsch’s Leeds last weekend with a crucial 2-0 first leg triumph over Rennes in the Europa Conference League.

Also stringing together a four-game winning run ahead of this game – in all competitions rather than the Premier League – Leicester have a top-half finish firmly in their sights and currently occupy 12th place, just two points behind 10th-placed Southampton with three games in hand.

Failure to collect silverware or qualify for Europe will no doubt go down as a disappointing season for an injury-hit Leicester, who have won just one of their last seven top-flight matches away from home and may seek to prioritise European success amid their dismal domestic fortunes.

Rodgers did steer his side to a 1-0 win at the Emirates last term, but Arsenal prevailed 2-0 at the King Power back in October – thanks in no small part to the goalkeeping heroics of  England No.1 hopeful Aaron Ramsdale – and the absence of Arsenal’s nemesis Jamie Vardy could play right into the Gunners’ hands.

Arsenal’s Emile Smith-Rowe is expected to be back in the squad this weekend after about of Covid-19 forced him out of last weekend’s win against Watford, but Takehiro Tomiyasu remains a doubt with a troublesome calf issue.

The Gunners are otherwise in good shape for the meeting with Leicester and have no need to alter a winning formula, with Cedric Soares once again preparing to deputise for Tomiyasu.

Despite failing to find the back of the net for the sixth Premier League game running, Alexandre Lacazette provided two assists at Vicarage Road and will expect to fend off competition from Eddie Nketiah for the number nine spot.

As for Leicester, Vardy – whose 11 goals in meetings with Arsenal is the most against any side he has faced – has picked up a fresh knee injury and will not be available for the Emirates trip and the near future.

Jonny Evans, Ryan Bertrand and Timothy Castagne are still out injured, and it remains to be seen Ricardo Pereira will be fit for Sunday’s clash after a setback in his recovery from a thigh issue.

Wesley Fofana’s potential comeback against Rennes was ruined by a positive COVID-19 test, and while the 21-year-old might be ready for Sunday, he is sure to take his place on the bench after recovering from a devastating fractured fibula.

13 left to go. That is all that remains of this Premier League campaign.

With Bukayo Saka echoing his manager’s sentiments about Arsenal heading into every game like it’s a cup final, the next on what would then be a hideously long cup competition is Brendan Rodgers’ struggling Foxes, who were tipped by many to be competing for the same position this season.

Arsenal will no doubt keep the same side that tore Watford to shreds last weekend, with Gabriel Martinelli, Martin Ødegaard and Bukayo Saka lining up as Arteta’s exciting attacking trio behind Alexandre Lacazette.

What a lovely little move ✨

Martin Odegaard scores his fifth goal of the season as #Arsenal take an early lead against #Watford.

Norwegian Ødegaard proved the catalyst alongside Saka last weekend, causing havoc in between the lines and through the half-spaces to disrupt Watford’s rigid defensive shape. Hodgson’s men could not live with the movement of both Ødegaard and Saka, especially for the first goal as shown above.

That is an area Leicester City will have to be wary of. Wilfred Ndidi and Youri Tielemans are expected to pair up in the middle on Sunday and must be at their sparkling and destructive best in shielding their leaky back-line. Both Ødegaard and Saka could again prove the main source of Arsenal’s goals, so if Rodgers’ men can stifle them both, Leicester City could have a huge chance of going back to the Midlands with something.

For Leicester City to grab all three, they must be clinical and exploit the areas behind Arsenal’s back-line, especially on the flanks, as Watford found out, with both their goals originating through Kieran Tierney’s side on the left. Whoever Rodgers deploys on the flanks will be key to Leicester City’s chances at the Emirates, providing both speed, much width to stretch Arsenal’s defence and a cutting edge when creating chances. Harvey Barnes and Ademola Lookman could be the vital catalysts for Leicester City.

No player under the age of 21 has been directly involved in more goals than Bukayo Saka this season (8 goals, 5 assists), in fact, if you stretch the field further to Europe’s top five leagues, then only Bayer Leverkusen’s Florian Wirtz (7 goals, 10 assists) has more combined goals and assists than Saka this season.

If Saka continues to play to the level that he did at Watford on Sunday then it won’t be long until he is rubbing shoulders with the continent’s best on a regular basis every week. The 20-year-old has become a hugely pivotal figure in Mikel Arteta’s new renaissance at the Emirates, and without him, Arsenal lacks the same vigour and attacking speed and incision in the final third to hurt defences.

His goal against Watford last weekend was all his own work, possessing the tenacity and resilience to dispossess an unalert Tom Cleverley, before playing a lovely one-touch move with Alexandre Lacazette highlighting the 20-year-old’s incredible knack to make something out of nothing, before burying an unbelievable shot into the top corner, no chance for Ben Foster.

A special goal from a special player. One brimming with confidence, style, assuredness and a maturity that is belying his years.

No Jamie Vardy once again for Leicester City which means Brendan Rodgers will be incredibly reliant on the creativity and imagination of James Maddison. The England squad hopeful has enjoyed another impressive campaign despite his side’s inconsistencies this season.

Maddison has been involved in 10 goals so far in the league this season (7 goals, 3 assists) as he aims to push the club back up the table. Like Ødegaard, Maddison will be incredibly crucial to Leicester City’s chances at the Emirates. Without a shadow of a doubt, most of their play coming through the 25-year-old.

His ability to pick out runners from deep, linkup the play in the final third and the knack of arriving in the box and finishing off chances has become a recurring theme for Maddison, and he now looks to be performing to such standards on a regular basis. In all competitions this season, he’s been involved in 18 goals (11 goals, seven assists), more than any other Leicester City player. Surely, Rodgers can’t be leaving Maddison on the bench again, can he?

Jonas Hofmann – The right fit for Antonio Conte?
Roberto Firmino: The most unrecognized player to the Reds success
To Top