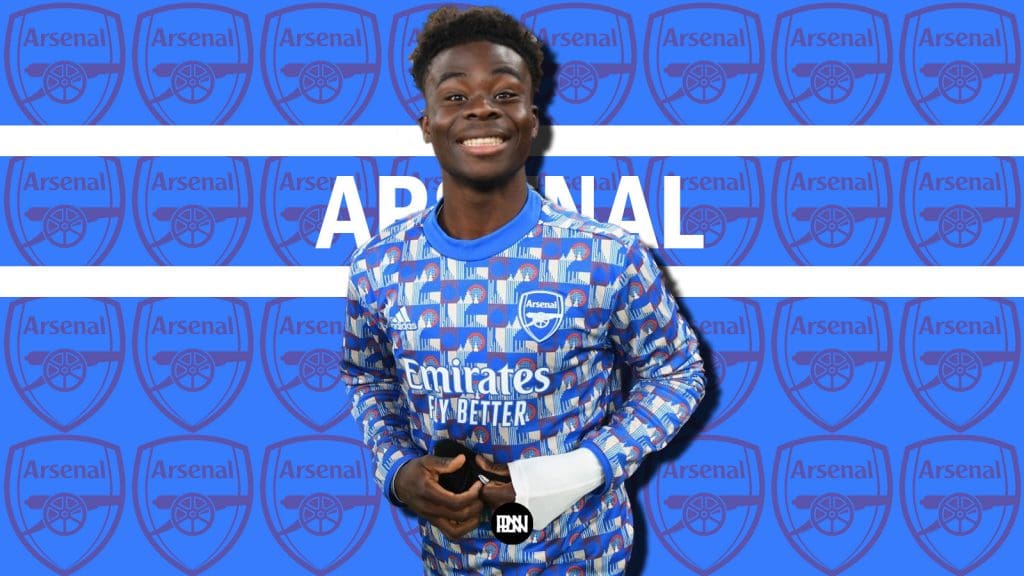 How good is Bukayo Saka? It’s no wonder Arsenal football club are so desperate to tie him down to a new long-term contract.

After a painful conclusion to last summer’s Euros, which Mikel Arteta has described as “great for his career”, Saka has bounced back and fired on all cylinders so far this campaign, hitting back at his racist critics and proving once again why he is indeed one of Europe’s most prestigious young footballers right now.

In fact, we’d go so far as to say Saka is currently the best young player in the English Premier League. We really can’t bat an eyelid at this strong claim. His sumptuous individual performance against Watford at the weekend underlined is undisputed qualities.

It’s true, history tells us we can’t afford to hype up our young British talents any more than we have been, but when a player is performing as stunning and complete as this, you can’t help but heap such lofty praise.

No player under the age of 21 has been directly involved in more goals than Saka this season (8 goals, 5 assists), and his goal and assist at Vicarage Road in an entertaining 3-2 triumph lifted Arsenal into the fourth spot in the table.

If you stretch the field further to Europe’s top five leagues, then only Bayer Leverkusen’s Florian Wirtz (7 goals, 10 assists) has more combined goals and assists than Saka this season.

Players of such sublime skill and quality deserve to be playing Champions League football, and both of these flawless young talents have yet to step foot in Europe’s flagship club competition. Maybe, just maybe that will change come to the end of this season.

If Saka continues to play to the level that he did at Watford on Sunday then it won’t be long until he is rubbing shoulders with the continent’s best on a regular basis.

Arsenal now sits fourth in the Premier League, a point ahead of Manchester United, who have played three more matches than the Gunners.

With 13 games remaining this season, Arsenal have moved firmly into pole position for the final Champions League spot.

Arteta will no doubt urge caution, and with games against Liverpool, Chelsea, Tottenham and Manchester United approaching, there is still lots of work to be done before the celebrations can begin. But Arsenal are on a resurgent run of form right now, with much of their football matching the kind of quality they possess in such a young and vibrant squad.

Bukayo Saka is the face of this new and exciting revolution at the Emirates, and Arteta is backing him to a tilt.

“I think Bukayo had an experience in the summer that not a lot of players would ever have and I think it was great for his career, because the football world showed how much they like him and how much they respect him,” said Mikel Arteta. “That’s another thing you get much more than that in football apart from winning trophies, so I think that was a big boost for him to realise in difficult moments that people are going to give him support and the club did exactly the same as his team-mates.”

That penalty miss against Italy at Wembley last summer will have haunted any player, but Saka has consummately shrugged off that setback and has never looked back. Arteta in his pre-match comments urged his team to show a “killer instinct” and no one followed those orders more expressly than Saka.

Bukayo Saka puts Arsenal back in front against Watford with a clinical finish 🎯 pic.twitter.com/89ffLWp8Xx

This was not the controlled performance Arsenal demonstrated against Wolves last time out, but it was a ruthless and clinical one. They ended the game with four shots on target and three of those were goals. All three goals were simply mesmeric, including Saka’s and Arsenal’s second.

It was all his own work, possessing the tenacity and resilience to dispossess an unalert Tom Cleverley, before playing a lovely one-touch move with Alexandre Lacazette highlighting the 20-year-old’s incredible knack to make something of nothing, before burying an unbelievable shot into the top corner, no chance for Ben Foster.

A special goal from a special player. One brimming with confidence, style, assuredness and a maturity that is belying his years. The way he dribbles past his markers, links up with the likes of Ødegaard and Smith-Rowe, his courageousness, bravery and unbelievable consistency always marks him out amongst his peers. The 20-year-old ranks sixth in the division for shot-creating actions (90), and eighth for progressive carries (180), as well as averaging 1.9 key passes per 90, highlighting he is one of the best in the division, for his efforts and influence in the attacking third.

Saka was at the heart of all Arsenal’s goals against Watford, highlighting his huge influence on this Arsenal side. He is the main man, the heartbeat alongside Martin Ødegaard. The combination between both of them for the opener was pure Arsenal football at its finest. The third, just as good. Saka taking a quick throw which resulted in a slick move that Gabriel Martinelli emphatically finished.

I knew he was good. The talent is obvious. But it’s not until I really focus in on the strengths, gather a ton of clips, look at the numbers, put everything into context, do I see how special he is. Saka is right up there.

Arsenal’s success this season has largely been down to their young players and it is fitting they are rising to the occasion as the pressure mounts with every passing week. The Gunners have scored 41 Premier League goals this term; 29 of them have been scored by players 23 or under.

Saka was excellent at Vicarage Road but was so Odegaard, and the pair’s relationship is growing every week.

Then there is Emile Smith Rowe, who missed yesterday’s match after testing positive for Covid-19. Saka is leading the way for goals and assists by Premier League players under the age of 21, but Smith Rowe is second to him and ahead of Phil Foden. Martinelli is fifth on that list.

It all points to a bright future for Arsenal, but suddenly they have the chance to make the present just as exciting.

After a miserable start to the season, losing their opening three Premier League games, Champions League football is within Arsenal’s grasp – and that is exactly where the qualities and brilliance of Bukayo Saka belongs.