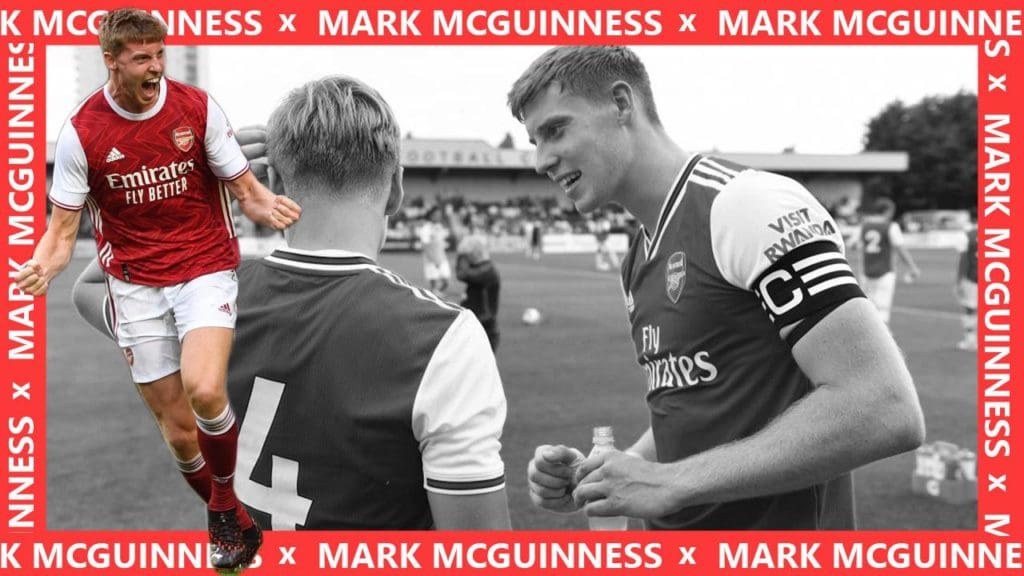 Arsenal starlet Mark McGuinness, promoted by Arteta to the first team, starts and scores in the 4-1 victory over MK Dons.

In the first week of April, The irish prodigy signed a long term professional contract with Arsenal under the watchful gaze of Per Mertesacker. It has been evident that Mikel Arteta has assembled a very impressive attacking outfit but have hardly been able to strengthen their defense, the answer to Arsenal’s woes might actually lie in their own backyard.

In the months since, the Republic of Ireland Under-19 starlet has been training with Arteta’s first team of Internationals. This week, McGuinness announced himself to the world with a thumping header in the 4-1 victory over MK Dons and If he continues to develop, he could save the Spanish boss a fortune in transfer fees.  When Compared to some of Arsenal’s other youth centre-backs, the Republic of Ireland u19 international looks a bit more composed and commanding in the physical duels, particularly in the air, He’s also capable of a great slide tackle when necessary and called upon.

Born in London, McGuinness – whose Parents are from Derry – has been on Arsenal’s books since the tender age of 10. The towering defender, standing at 6’4″, Made it into the club’s U23 side last season. Along with Newcastle United’s Oisin McEntee, He formed a formidable central defensive partnership as the Ireland U19’s reached the semi-finals of the 2019 European Championships.

A relative unknown to Arsenal supporters, McGuinness appeared in Arsenal’s first team in a preseason friendly against MK Dons this week – their only game before they face Liverpool in the FA Community Shield on Saturday. Coming on as a second half substitute, he organised the defence and helped the gooners keep a clean sheet for the time he was on the pitch. Playing in the centre of the back three, the defender did exceedingly well in addition to his goal.

Mark McGuinness could have been forgiven for not being too optimistic with regards to his chances at Arsenal. During the course of the entire 2019-2020 season he appeared just four times for the club at youth level, and, even though he missed a considerable amount of games due to injury, he was often not called upon even when fit and fine.

There has been the odd suggestion that he could be sent out on loan this season and perhaps such a move could prove to be hugely beneficial to him as well as the club. The impression that McGuinness made against MK Dons, however, will most certainly have boosted his playing profile and could lead to him enjoying a much more productive and satisfying campaign than he did last season.

Why there is still a way back for Matteo Guendouzi?
Newcastle United: Sensible Signings that could solve ongoing crisis
To Top