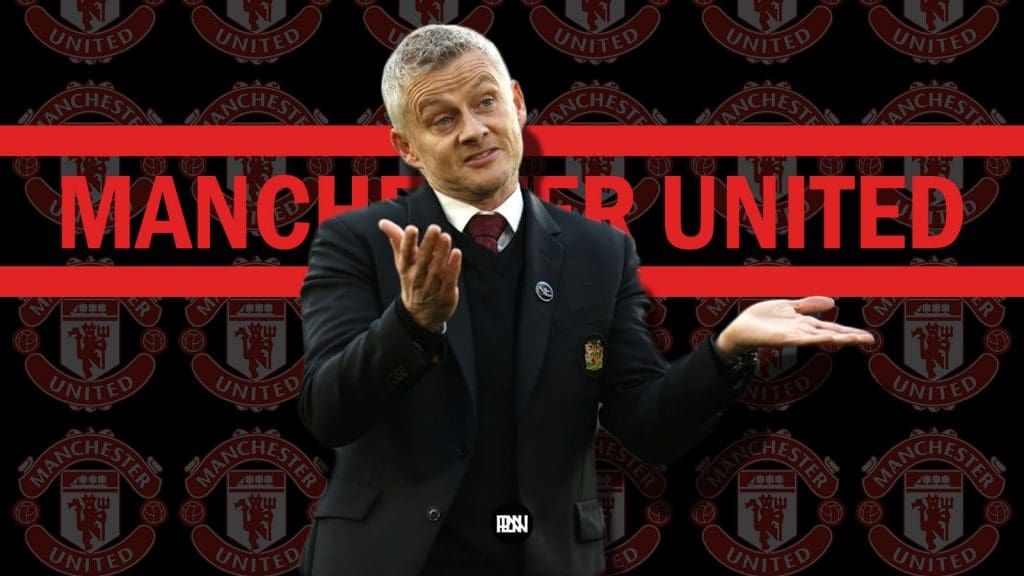 “Champions league nights at Old Trafford” they are called. Manchester United fans were treated to another one of those on Wednesday night. And what a night it was. Made memorable by a second half display that had the United faithful on the edge of their seats for its entirety. And buoyed by inspired performances from Cristiano Ronaldo, Aaron Wan-Bissaka, David De Gea and a few other players.

The match was entertaining for all the right and wrong reasons. United displayed some offensive prowess, taking full advantage of Atalanta’s man-oriented pressing scheme to create and attack space between the lines. Using this space combined with intelligent movement behind Atalanta’s defence, United created some good chances and openings that were squandered by poor execution of final actions. They eventually won the game courtesy of a classic Ronaldo header late in the game after tense second half.

Brief analysis of the game

Atalanta’s major undoing wasn’t their man-oriented pressing scheme in itself, but the players involved in the press. When United tried to play out from the back, Josip Ilicic and Luis Muriel acted as a front two and pressed United’s CBs, while Mario Pasalic and Teun Koopmeiners were fixated on United’s midfield pivot. Koopmeiners pushing up to press Fred meant that Reno Freuler was left alone in midfield. And in a man-oriented press, one would assume that his direct opponent would be Bruno Fernandes.

But Freuler mostly assumed the role of a wing-back and pressed Wan-Bissaka whenever United were in possession, leaving Bruno Fernandes in space between the lines. United used this space as their main means of penetration throughout the game, Mason greenwood and Bruno Fernandes repeatedly exploited those spaces and helped United create chances or openings. 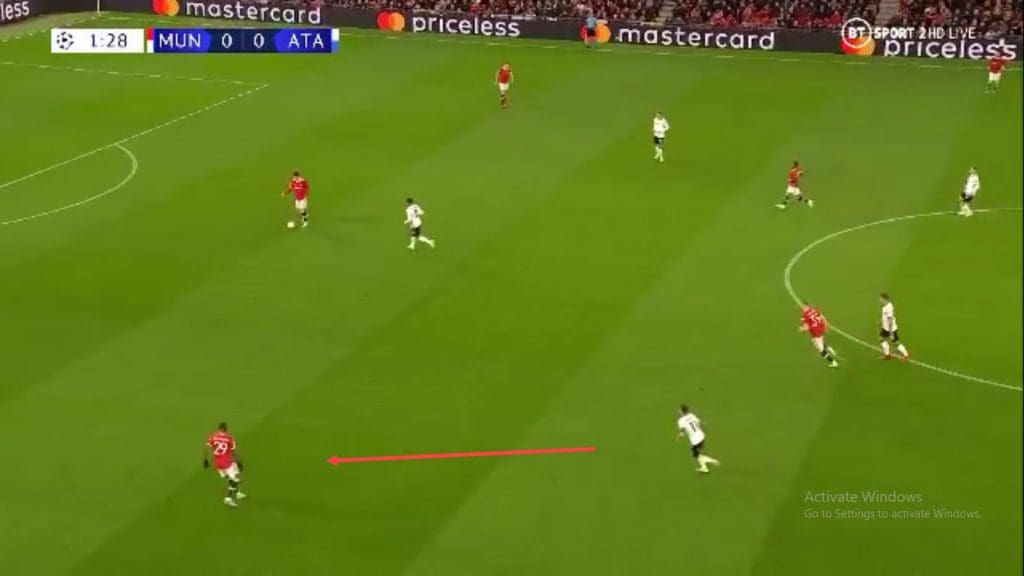 Freuler stepping out of midfield to press Wan-Bissaka

United exploited this press to create their first dangerous opening of the game. 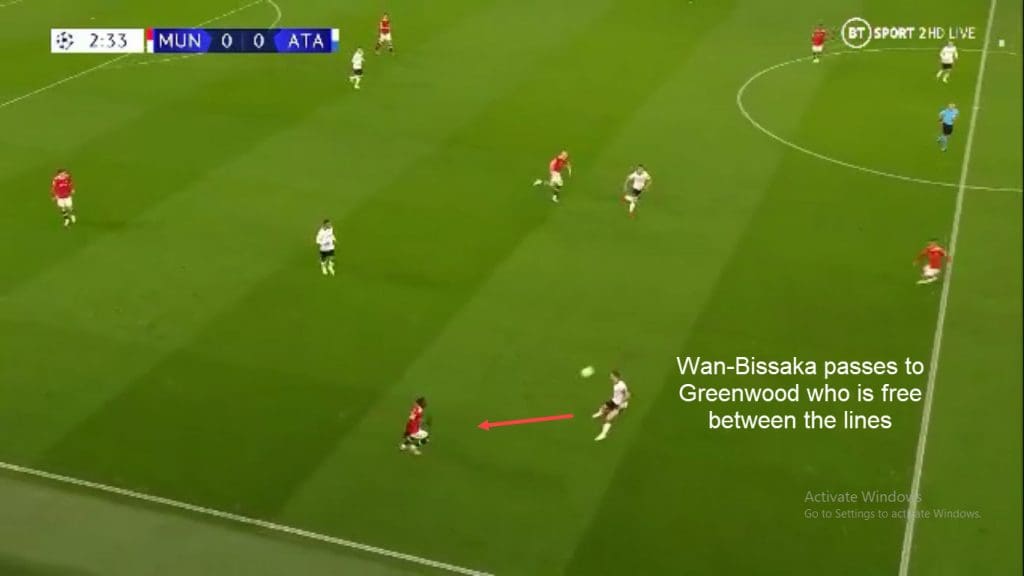 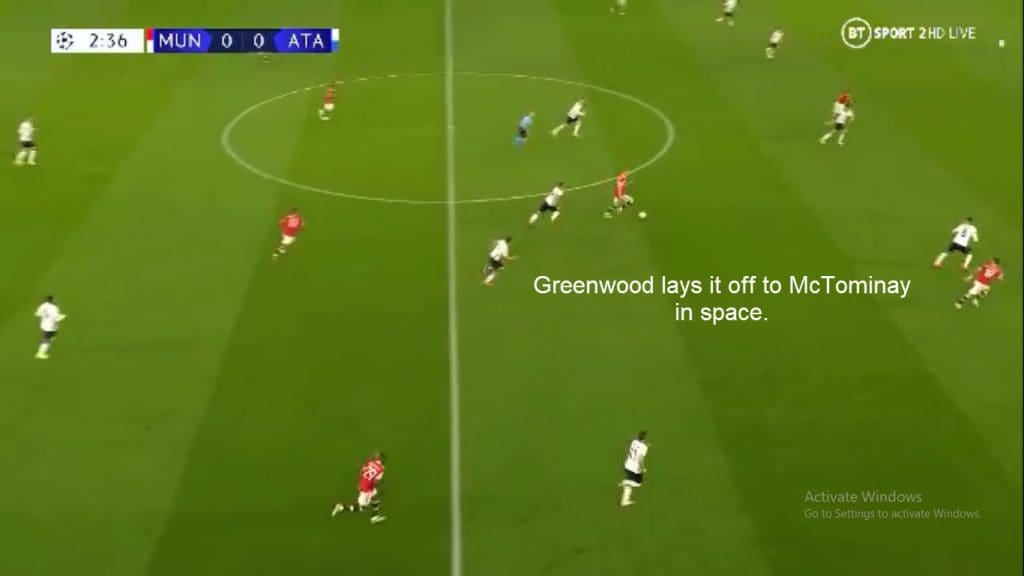 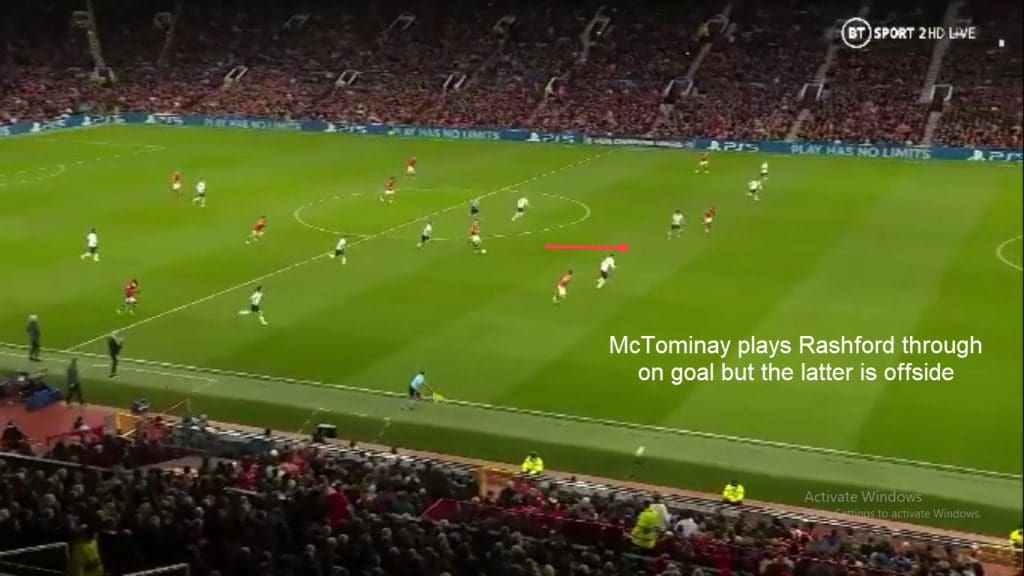 And a lot other times in the first half, mostly via Bruno Fernandes: 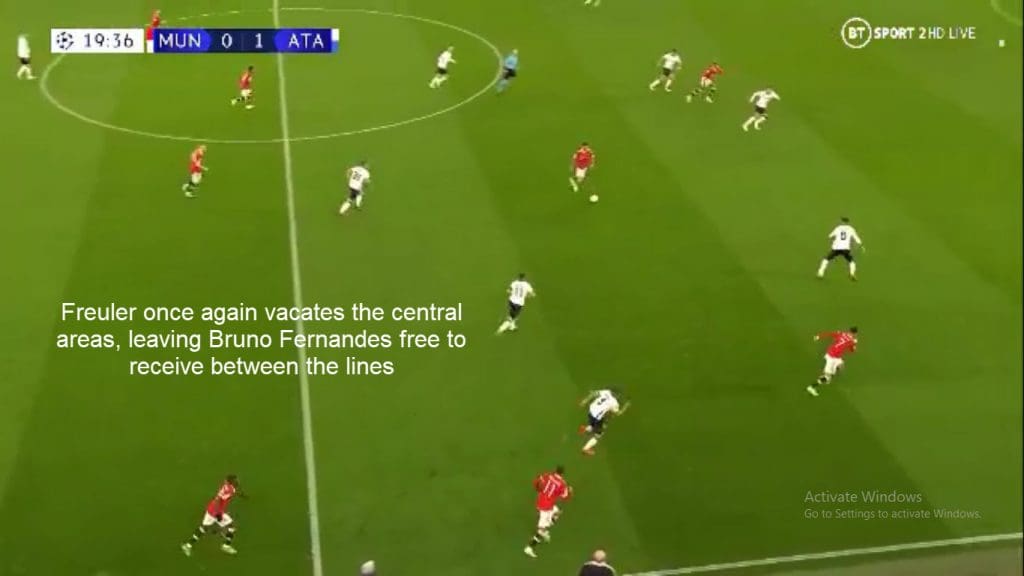 Despite the bright attacking ideas and United’s second half performance, there was still a subtle feeling of dissatisfaction among United fans once the excitement died down. This quote from Paul Scholes after the game encapsulated that dissatisfaction.

“I get the United excitement, but that first half put me off the second half and if United were playing a better team, they’d be out of sight. They played an Atalanta team who had five players missing and a defender who went off at half-time. I get the excitement, but there was something about that first half that was worrying. It lacked unity and that was a worrying sign.” – Paul Scholes

The dissatisfaction must have come from a variety of reasons, but most of all, Scholes and other United fans were frustrated by the manner in which the defensive issues that have plagued the team all season reared its ugly head once again. While Scholes’ insinuation that a better team would have been up up and away at halftime was harsh, considering the quality of chances that United created in that same time period, he was right to shine light on the fact that United still fail to manage or control games defensively.

What is the problem with the defence?

United’s defence structure exhibit a number of defects that can be boiled down to one single fundamental flaw: a lack of central compactness. Whether it be in a low block, mid block or when they press high, it is too easy to isolate and/or overload United’s pivot. This disorganization means United are easy to play through and can’t control space with their defence.

In the high press United generally press with poor intensity from the frontline. An intensity so poor it throws the purpose of the press into question. After the poor intensity of the press, there’s also a trend of United’s frontline being easily baited, either to one side of the pitch or to press an opposition CB. This occurs due to one or more of poor positioning from the frontline, Fernandes’ over-eagerness when pressing, and in more recent times, Fernandes trying to compensate for Ronaldo’s lack of intensity by stepping out to press. The space they vacate centrally gives the opponents an easy route to progress the ball through the center of the pitch and overload United’s pivot. 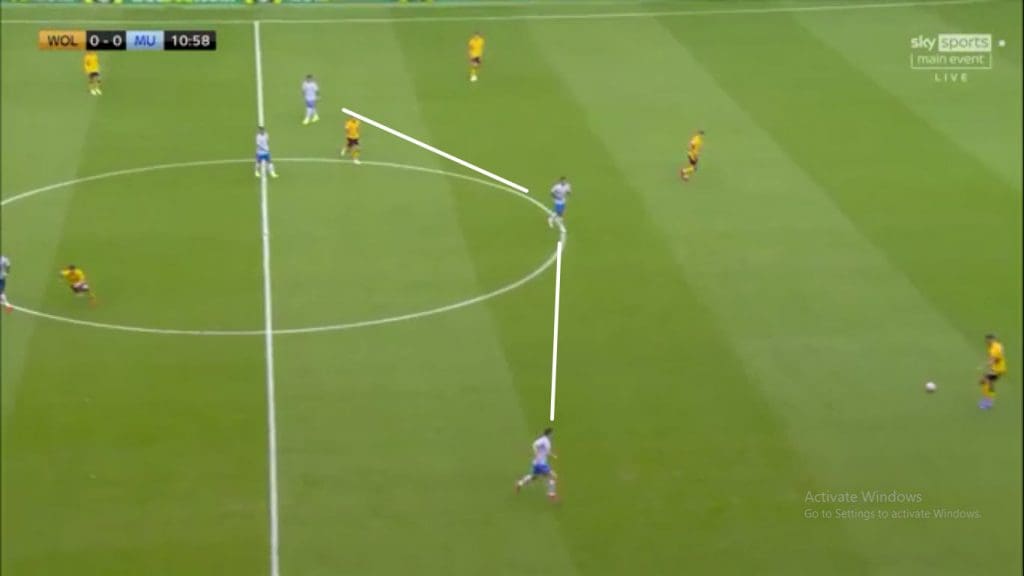 United lacking horizontal compactness when they press. A stretched frontline is easy to play through

More of the same problems exist when United are in a mid block. United generally get pushed back very quickly given how easy it is to progress the ball against the high-mid block. However, where the problems have culminated for United this season has been in their settled low block. It always feels like the opposition create a chance within 5 seconds of facing United’s defence, and this isn’t that much an exaggeration. We’ll look at some of the problems that need addressing, starting with the main theme – central compactness.

United, like most teams that use a back four in defence generally like to form a back 5 or 6 when the ball is wide. This has massive benefits as it stretches the backline, gives the team more lateral coverage, provides cover for CBs who step out to press and prevents overloads or 5v4 situations against the defence, since most teams attack with 5 players. It also an important tool to prevent crosses to the far post, and overloads against the FB at the far post in the event of the crosses being made. This move happens in brief moments so it largely goes unnoticed, but it is a very important aspect of defending for teams that use a back four. 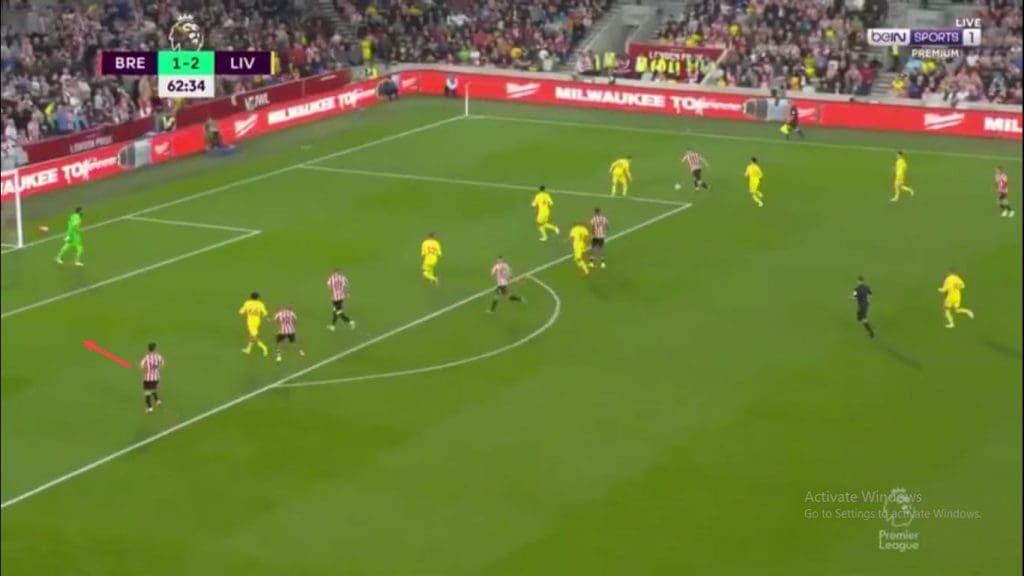 Liverpool fail to stretch their back line in the build up to a Brentford goal, due to Jordan Henderson being out of position. This leads to an overload on Alexander-Arnold at the far post.

United, in doing this, observe good defensive principles. But of course, there is a problem with the application and that shall be discussed here.

United usually make this back five with one member of the midfield pivot, creating a pseudo third CB with the midfielder. When this is done without enough defensive support the other midfielder in the pivot can be easily isolated and overloaded. This has been the case for much of the season. And that is why United have looked so open centrally in their games this season. Lacking central compactness gives an invitation to the opposition to take more shots. And as a result United have conceded 99 shots in the Premier League this season. 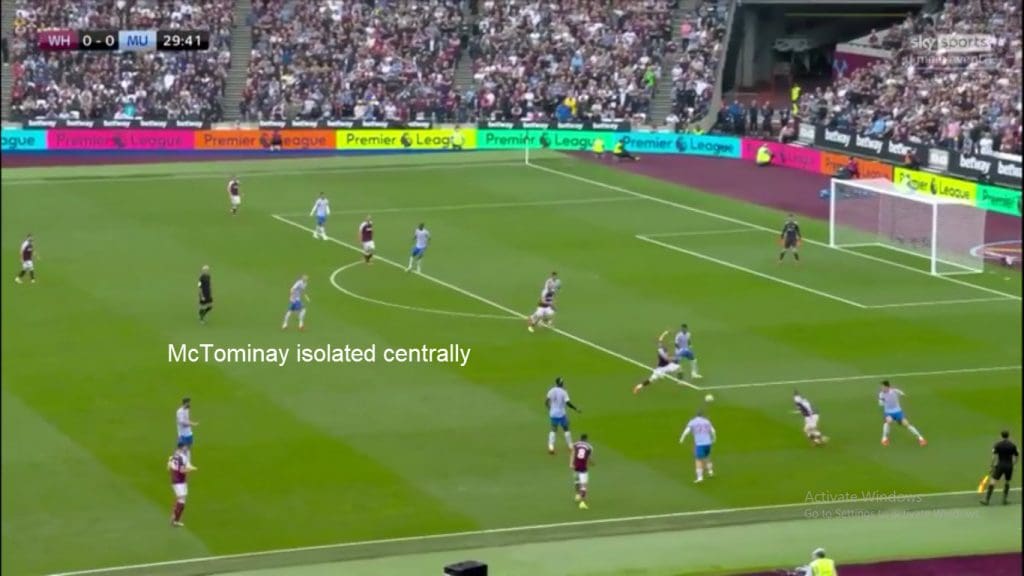 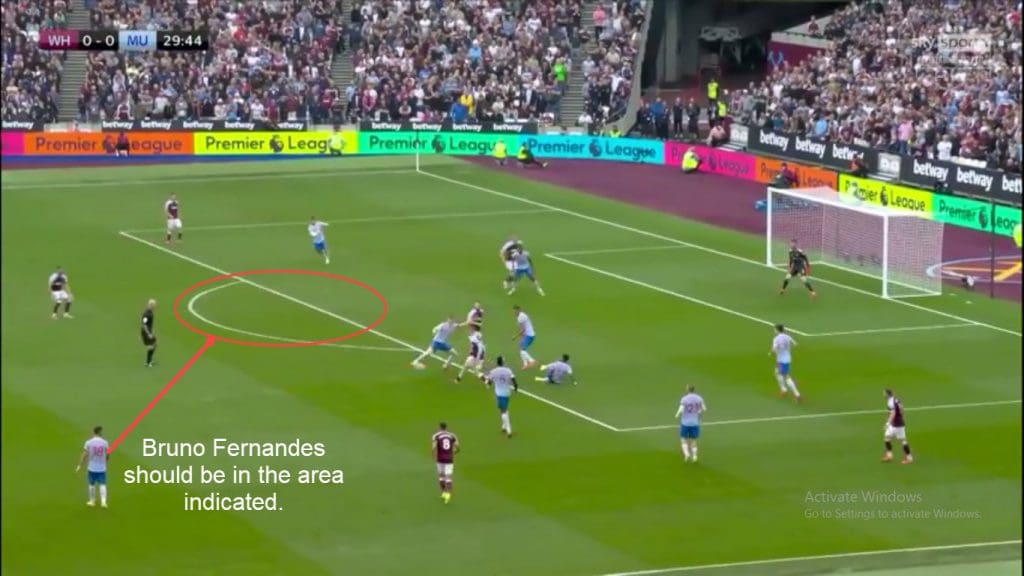 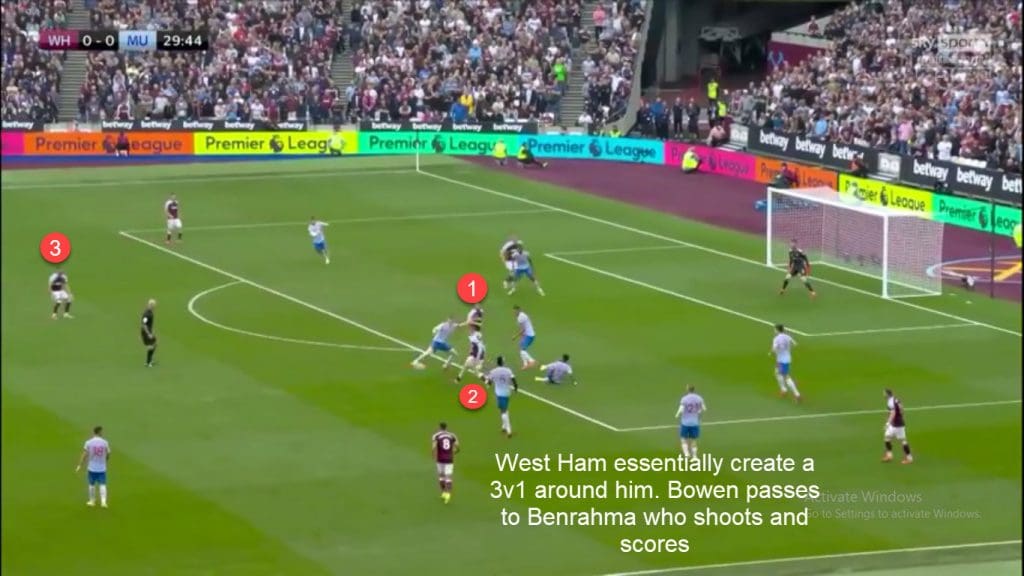 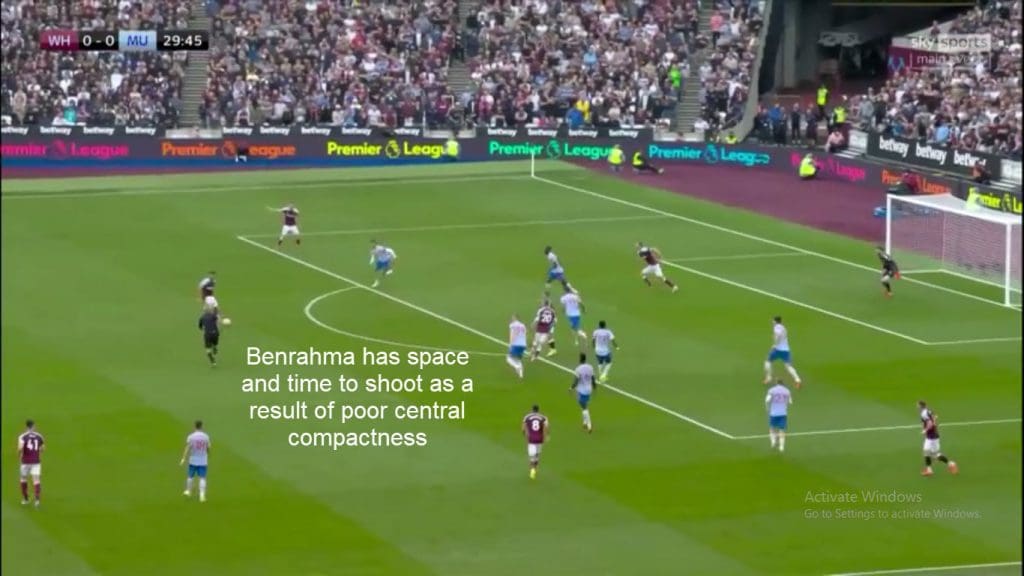 The same problem was on display against Atalanta 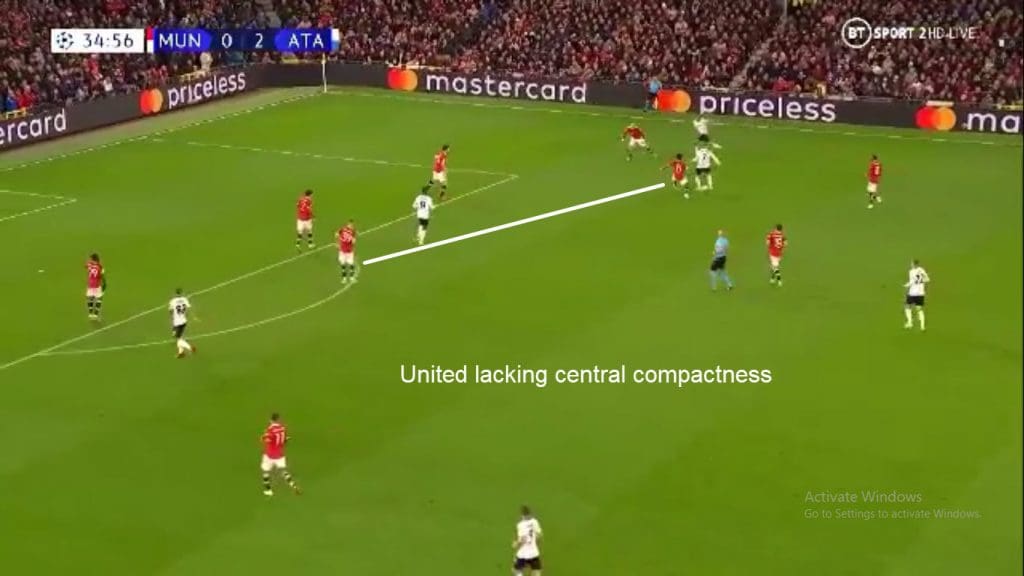 The way to prevent this is to form a compact central block. In simpler terms, get more bodies in the center and close down spaces for a pass or shot. This provides central (or horizontal) compactness and also gives the backline lateral coverage of the pitch and prevents overloads. And since United’s AMs and wingers don’t fall back quickly to achieve this central compactness just one member of the midfield pivot is left to defend the central zones in front of the defence.

United have often observed the right defensive approach. And it is always visible in the team’s best defensive performances. A few examples are shown below. 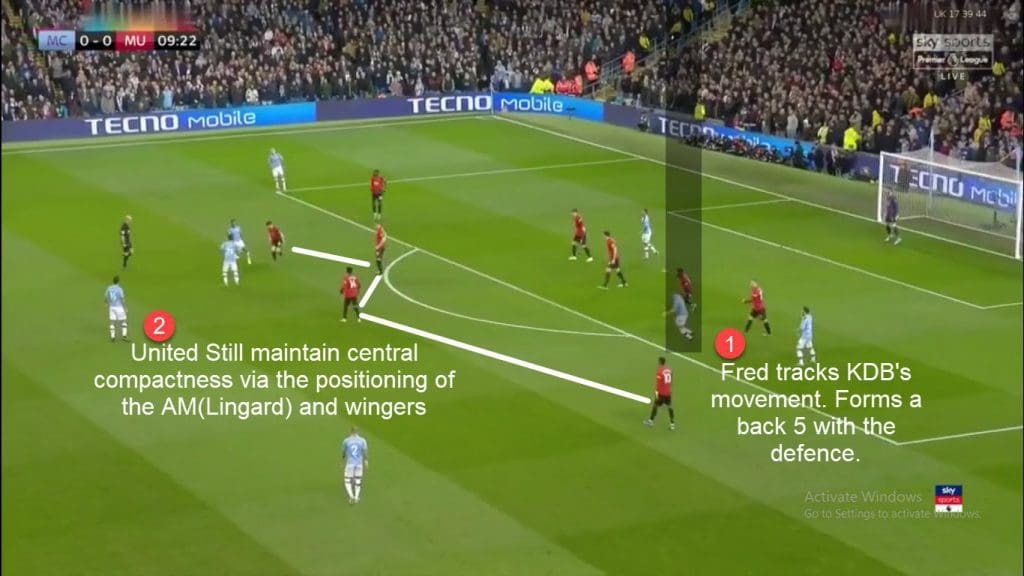 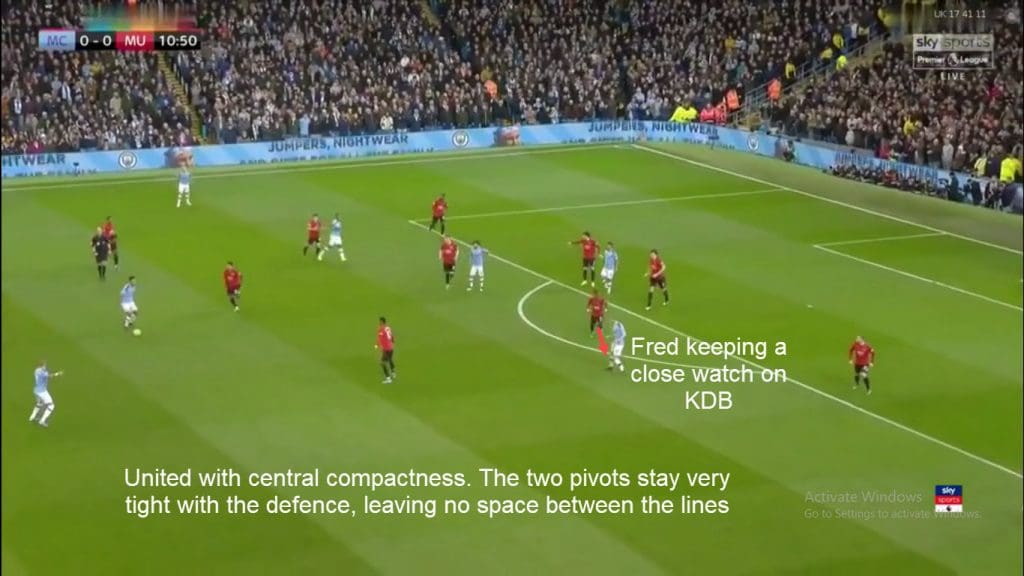 But United’s offensive talent has witnessed an exponential growth since. And with the team improving its offensive talent, Ole Gunnar Solksjaer has to find a way to get the team to defend better. And the first step to achieving this is to improve the defence structure. Congesting the central areas and the spaces between the pivot and forwards will go a long way to firm up United’s defence.

While the structure of the defence has been the biggest problem, and is Solksjaer’s problem to fix, the players as individuals also have a hand in the team’s defensive struggles. And one way they are culpable is communication and organization among themselves. Wan-Bissaka and Scott McTominay generally have a good understanding of when to switch targets and which runners to track and that has made the right side of the defense a lot more solid. But communication and switching targets has generally been a struggle for the whole defence.

Communication helps with tracking runners, maintaining focus on and presence around the opposition’s most dangerous offensive player in a sequence. (Yes, your mind should immediately travel to Jamie Vardy’s goal last weekend where about five United players were around him and none of the players thought to switch targets.)

Communication and organization as well as compactness most especially helps weaker defensive players to assume the right positions and make the right decisions, thereby raising the level of their defensive perfomances.

United have conceded many a goal this season because of inadequate communication and organization among the players. Take for example Leeds’ goal on the opening day of the season. Where Leeds switched play from the right to the left side of the defence (and yes, Paul Pogba should have tracked Ayling’s movement), but when that damage was already done the best move for Fred and Maguire was to switch their primary targets.

Maguire’s primary focus was on Patrick Bamford and Fred was chasing Ayling, trying to get there just in time to prevent the Leeds’ fullback from taking the shot. A switch between the two would have ensured that Maguire got to Ayling quicker, while Fred would provide cover to prevent a pass to Bamford in behind Maguire. Instead, Fred continues chasing Ayling, doesn’t get there on time, and Maguire doesn’t step out of the defence line to close down the shooting angles. So Ayling had enough time and space to pick out the top right corner and score. 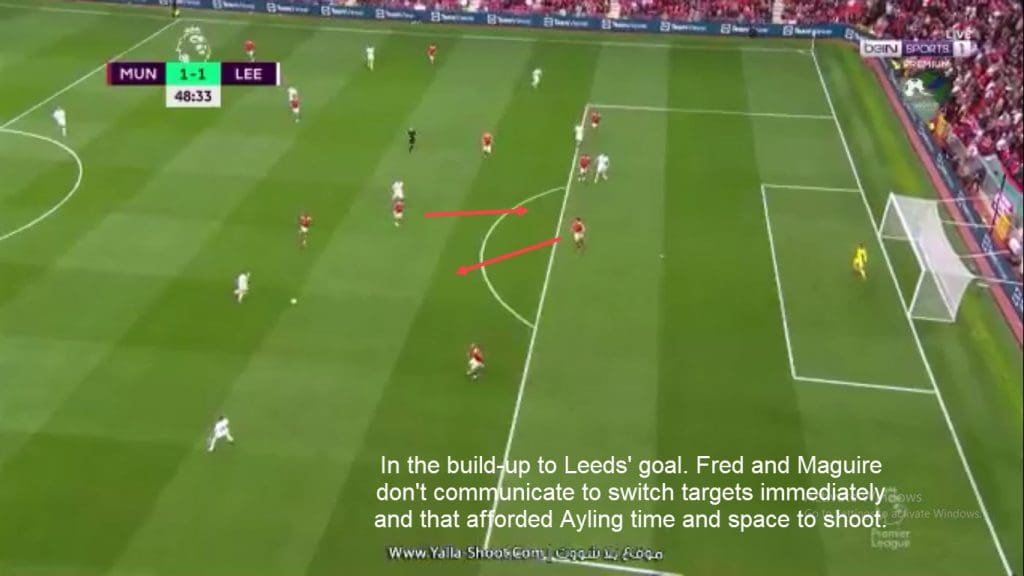 Leeds’ goal could have been prevented by better central compactness which Pogba failed to provide by not tracking back. Or by communication, quick thinking and switching amongst the players. Both have been discussed in this article.

A lot of the goals United have conceded follow this framework. And against Atalanta, to add to Paul Scholes’ chagrin, this was the major cause of Mario Pasalic’s goal. When Maguire and Luke Shaw picked up the same player and left Zappacosta’s run untracked. In an ideal situation some communication and awareness would have ensured Luke Shaw stepped out immediately to stop the cross. And maybe then Paul Scholes would have enjoyed the first half a bit better. 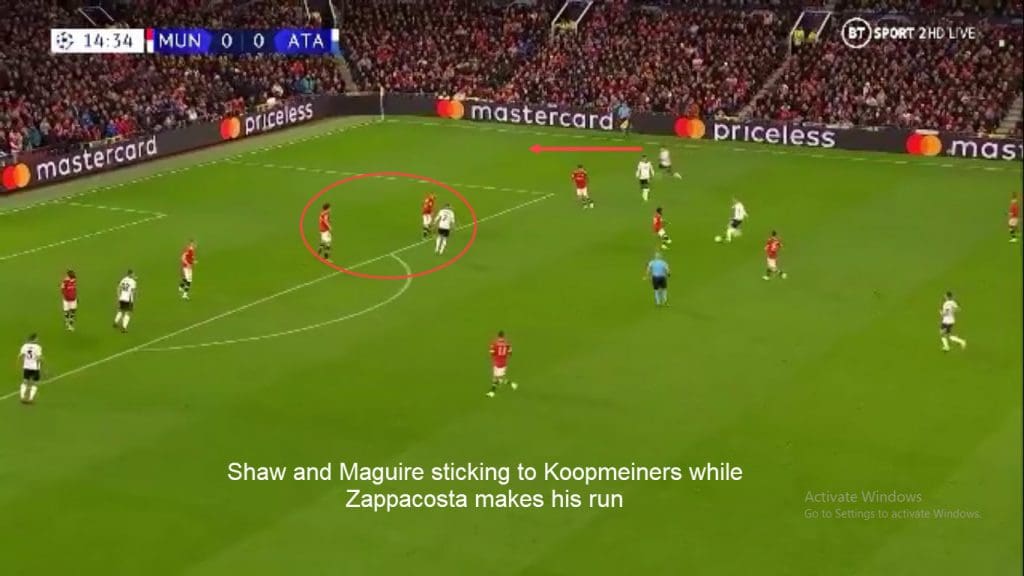 Manchester United generally defend better in big games and the historical relevance of the match against Liverpool will most likely ensure better defensive performance and effort from the team. But United will have to raise the level of their defensive performances against other teams if they are to go all the way this season. Solksjaer has a lot to do on the drawing board, and getting this team to observe better defensive principles should be around the top of the list.