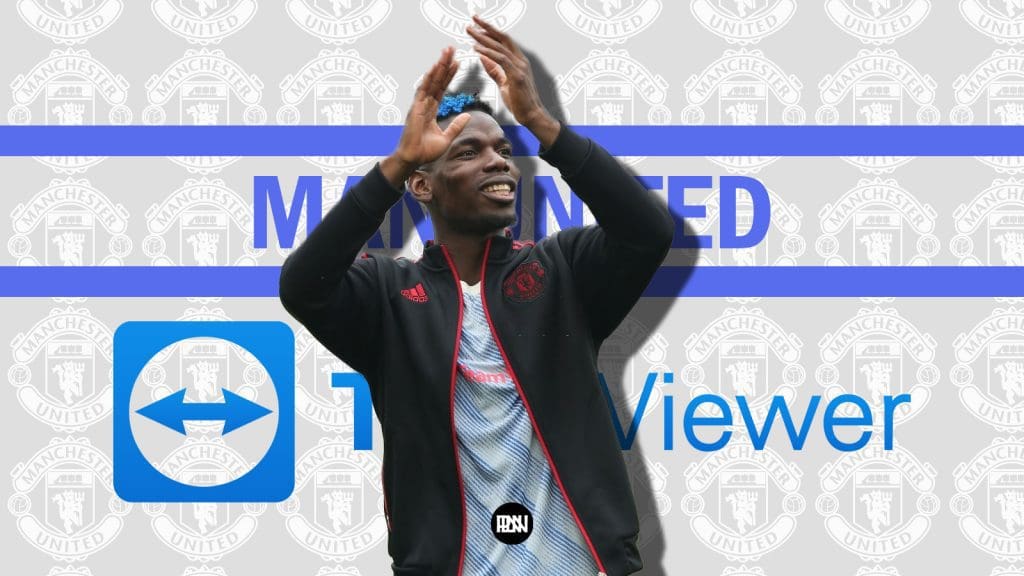 A long time has passed since Paul Pogba’s high-profile move to Manchester United, but I’m sure everyone can still remember the buzz that surrounded the transfer, the huge sum it took to acquire his services, and the expectations that followed as a natural result.

Along with the expectations; fans, pundits, and coaches alike also seemed to assume that commanding a world record fee meant he’d be able to perform different midfield roles at will. Cerebral defensive midfielder, regista, and athletic box-to-box midfielder are a few of the midfield roles he was supposed to perfectly excel at. And all within the constraints of an ever-constant 4-2-3-1 formation. I can’t help but wonder how Neymar would have coped playing as a GK if he’d signed for Manchester United for €220m in 2017. At least he’d have no problem with diving (pun intended).

In the defense of whoever might have wrongly profiled Pogba at the time, he does have a lot of conflicting skill sets that make it hard to make out his ideal position. Whatever deficiencies he might have in his profile have always been masked by the simple fact that he’s an extremely gifted football player and can change games in the blink of an eye. But it poses an uphill task to choose an ideal, long-term position for him.

Paul Pogba’s exquisite passing range and vision paint the picture of a midfielder who can control the tempo of games, but his poor use of space in deep areas and a lack of defensive awareness that is visible in his inability to economize his touches under pressure means he’s never able to consistently dominate midfield at a high level. His huge frame, heading ability, shooting technique, and box presence during set-pieces are reminiscent of elite box-to-box midfielders of the past, but he lacks the movement from deep areas, defensive dueling, or recovery ability, consistent ball-carrying, and mobility needed to dominate in that role. His sheer physical strength, strong long legs, and 6’3” frame suggest defensive prowess but he lacks the full commitment to the defensive tasks of the game to consistently excel in a defensive midfield position.

An understanding of midfield roles suggests he should ideally play in a midfield three as an advanced #8 or mezzala, given absolute freedom to move up and down the inside channels, neither extremely offensive nor defensive in his duties. But this hasn’t been feasible as he has constantly played in a 4-2-3-1 formation for club and country since his return to England.

In recent times, Ole-Gunnar Solksjaer has fielded him as a LW in the same formation. Although he has since played a few matches in the pivot, it is fair to say that he’s now primarily considered an attacking option in the current United squad. In this article, I analyze how he is able to carry out his new role, what he does differently from the left-wing, and his limitations where they need be.

I’ll start with the positives. One of the ways Pogba improves United’s attack is with his strict positioning in and around the left half-space. He uses his positioning to stretch defenses and midfields alike, as he offers complimentary movement and positioning to the players around him. His positioning provides a reference point for other players to make rotations and play off him. He is always available as a passing option, either dropping deep or positioning higher up as a potential passing option.

His positioning allows the team to maintain good spacing and a proper offensive structure in the attacking phase. The mental effect of having a player like Pogba who isn’t highly mobile off the ball, but is creative and technically secure, makes players like Bruno not only more willing to abandon creative load but to also pick up good positions with the knowledge that the ball will find them. Pogba also possesses an impressive understanding of his teammates’ movements. 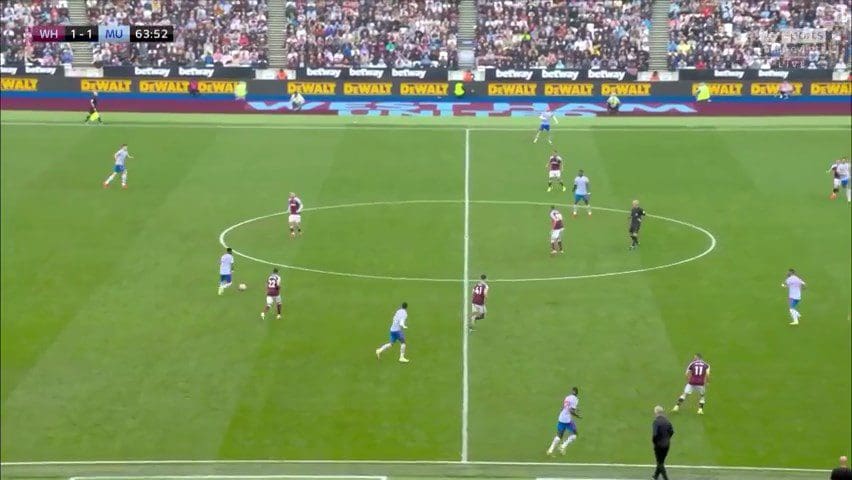 Pogba and Bruno are positioned in both half-spaces, stretching West Ham’s midfield and maintaining proper spacing in the attacking phase.

via GIPHY
Here Ronaldo drops deeper and Pogba stays on West Ham’s last line of defense, pinning the defenders and freeing up space for Pogba and other teammates

FINDING PLAYERS BETWEEN THE LINES AND ROTATIONS

From his position in the left half-space, he is a mixed bag when he’s on the ball. Asides from the ability to beat players and carry the ball from deep, he can perform passing combinations by providing himself as an option for a wall pass or find more dangerous passing options between the lines with a carefully weighted pass. He also uses quick changes of direction after passing to players between the lines to eliminate opposition defenders.

via GIPHY
(above) Here he is again positioned in the left half-space. He makes a wall pass to Greenwood and then makes a dart into the box to get on the end of the cross.

via GIPHY
(above) Despite being in a very tight space in Southampton‘s box, he still manages to find a player between the lines and makes a quick movement to receive the return pass. The move ultimately results in Greenwood’s goal and an assist for him

via GIPHY
From a high position in the left half-space, he still finds Greenwood between the lines.

It shouldn’t make sense to suggest that a player who normally struggles with defensive duties suddenly starts performing better at said duties when playing in a more offensive position, but we are discussing Paul Pogba after all. There is a simple explanation for this and it is a matter of significance, defending in a pivot puts a lot more responsibility on Pogba to be defensively astute.

In the pivot, there is simply too much responsibility to juggle, and choosing the wrong one can put the team at serious risk because of the proximity of the goalpost to the positioning of the pivot. The pivot player has to: cover for his partner in settled play and transitions, cover for CBs, cover for FBs, track runs, be agile when closing down shooting angles and blocking shots, be aware of passing lanes, win duels against ball carriers, and so on.

In the wide areas; the limited space that Pogba has to defend benefits his massive frame and reduces the level of his engagement in defensive actions. Also, there are reference players to defend against as a left-winger which are the right-back, right-winger, and if the formation requires it, the right wing-back. The reference players and having a “man” helps to maintain focus, and also makes defending easier. Unlike in a pivot where there are different options and your “man” changes as the situation changes.

Defending in the wide areas is also mostly done as a first man, squaring up to your man and stopping him outright is all that needs doing. Whereas in a pivot you have to do a lot of covering, not covering well for your pivot partner is as big a problem defensively as not winning a duel. There’s simply too much activity and demand to make good defensive decisions.

Here are examples of Pogba using his frame to limit his opponent’s options on the ball, making use of the touchline as an extra defender.

via GIPHY
Pogba uses his huge frame to close down Bowen’s crossing and shooting angles.

via GIPHY
Pogba uses his frame to press Coufal into losing the ball. Making good use of the touchline as an extra defender.

In the following clip, West Ham adds some dynamism to their wide combinations, Pogba loses his man (Coufal) who moves infield and with the addition of other defensive issues it results in United conceding a goal:

via GIPHY
Pogba shows a lack of elite defensive nous that could still be exploited in midfield, but he has just enough to consistently be a net positive when defending the left flank.

HIS GOOD OFFENSIVE POSITIONING CAN BE IMPROVED

I’ve analyzed his offensive positioning but one of the ways Pogba can improve his and United’s offensive performance is by improving his awareness. He sometimes squares up to his teammates with closed body orientation, clogging up space and harming potentially advantageous space or time. Whether these moments stem from a desire to receive the ball to feet or are just moments of slow decision making is left to be seen, but better awareness of the offensive situation and quick thinking eliminates the problem.

via GIPHY
(Above) McTominay attempts to carry the ball but Pogba squares up to him with closed body orientation. It doesn’t result in a direct loss of the ball but it is poor attacking form.

via GIPHY
(Above) Pogba faces Fred with closed body orientation.

A hallmark of Solksjaer’s Manchester United has always been the ability to attack via transitions. In this system, Marcus Rashford has matured into one of the most potent forwards in transition, and it is those boots Paul Pogba has been asked to fill.

The first point in this section is that of anticipation and gambling after a counter-press or ball recovery. Manchester United under Solksjaer have scored a number of goals this way and Fred’s single claim to being the most important midfielder in the pivot comes from his ability to recover the ball after it is lost in the offensive phase. Either via a loose ball recovery or a quick counter-press.

via GIPHY
Pogba loses the chance to make a run behind West Ham’s midfield.

Attacking a disoriented defense often proves fruitful and Pogba needs to take more advantage of situations like this.

The final point involves more direct transitions and the simple act of punishing the opposition for getting too ambitious in their search for a goal. In these situations, Pogba is one of the best passers in world football. And has already demonstrated it this season with that marvelous assist to Greenwood for the goal against Leeds. He is able to pick out runners along the flanks with diagonals or carefully weighted through passes.

But a problem arises when he’s the man high on the flank, running from the sort of positions his pass targets usually make their runs from.

It would be unfair to demand that he attack a high line with the pace and powerful ball carrying of Rashford or Kylian Mbappe, but an improvement in his use of the ball is still needed. Since there are no runners to release and his pace isn’t enough to take him all the way he needs to make better use of sideways passing options and make quick releases of the ball.

via GIPHY
(Above) In this clip, he fails to make use of a good sideways passing option in Bruno and ends up conceding a foul.

via GIPHY
(Above) He fails to find Sancho with a square ball that would have put him through on goal and instead suffers a tactical foul.

Paul Pogba’s abilities don’t put him on par with the best left-wingers in the world, nor is the change a viable long-term solution for him as a player. But in the current Man United team and set-up, he stands alone as the best candidate for the left-wing, pending Marcus Rashford’s recovery and Jadon Sancho’s return to form.