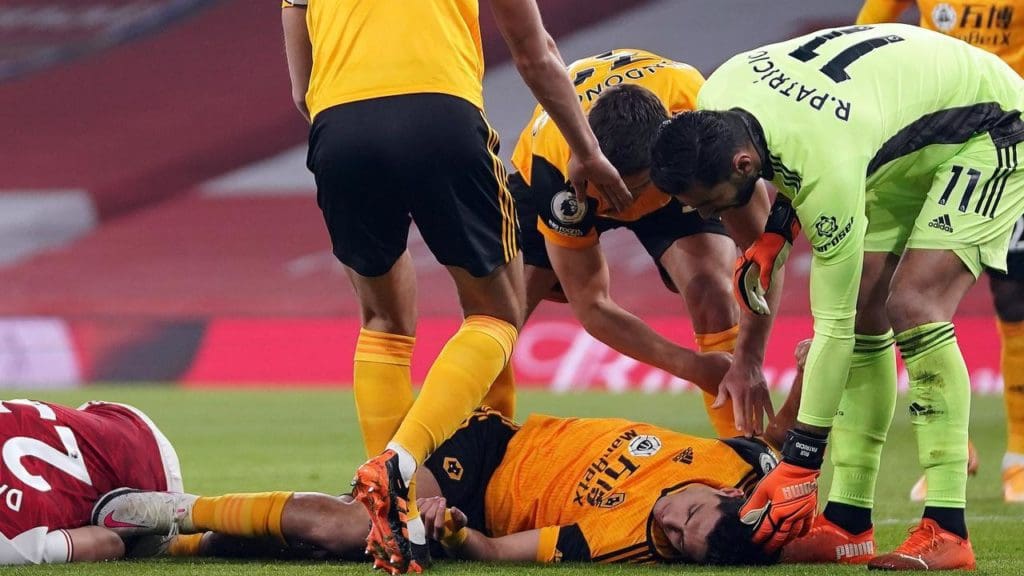 What a great news for Wolverhampton Wanderers fans and club, as their highly prolific forward Raul Jimenez is considered to be in much better state to be discharge from the hospital next week, after going through a fracture skull surgery.

“Raul has been recovering well in hospital and should be ready to leave early next week to rest at home with his family.”

An update on the early stages of Raul’s recovery from club doctor, Matt Perry.

The Mexican forward had a concussion while contesting for an aerial ball against Arsenal’s defender David Luiz during their Sunday’s encounter. The shocking turn of event led to the 29-year-old forward been given an oxygen while he was lying helplessly unconscious on the field, before been stretched off, and was instantly taken to a London hospital.

The heartbreaking incident kept everyone praying for his survival, and luckily, the club doctor Matt Perry spoke on Wolves’ official website and stated that: “Following Raul’s injury on Sunday, and the subsequent surgery, he has been recovering well in hospital.

“We are delighted with the reports from his specialist; he has made excellent progress. He should be ready to leave hospital by early next week.

“Once home, he will be reunited with his partner and young daughter who, because of Covid restrictions, he hasn’t seen since Sunday night. As his doctor I am not going to disclose any more details of his injury, his surgery or provide daily accounts of his recovery.

“Any injury of this nature is complex and timescales are uncertain but it’s safe to say that Raul’s most immediate needs are simple: space, rest and peace.

“Raul and his family are very thankful for the privacy they have been given, and for the overwhelming support they have felt from the football family and beyond. Raul is extremely grateful for all the messages of goodwill he continues to receive, which will certainly help him during his recovery.”

Jimenez is now said to be feeling comfortable and as well resting after the surgical procedure and he’s now in a position to reunite with his family next week.

Upon Jimenez injury, his side (Wolves) were eventually the lucky side on Sunday, after claiming the sort after three points against the unimpressive Arsenal side at the Emirate Stadium. Wolves seems to have drawn some determination and zeal from Jimenez incident, to soften the pain and put some smile on the fans faces.

Wolves proved to be the better side, as the Arsenal team continues to fail in their attempt to find the back of the net from an open play. Though Arsenal’s talisman Aubameyang had a glorious chance to redeem the failing side from another loss, after rounding Wolves keeper, but the Gabonese striker failed to keep his calm when it matters most, and he surprisingly failed to convert his chance.

Wolves win against Arsenal takes them to a seventh-place position on the league table, with 17 accumulated points in ten League matches so far. Their next encounter will now be against current league Champions, Liverpool on Sunday at Anfield Stadium.

Will Jimenez absence eventually hunt the Wolves despite the club’s win in their last game? Let’s see how it pans out on Sunday.