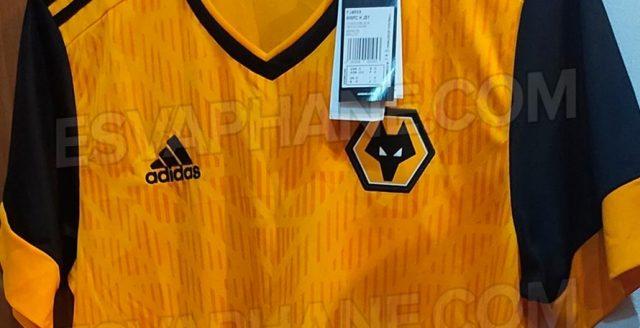 Wolves 2020-21 home kit has been made by the club’s jersey sponsor Adidas, as usual. Wolverhampton 2020-21 home kit will be worn by Nuno Esperito Santo’s men next season during home games at the Molineux Stadium.

The official home kit for next season, which is obviously going to be produced by Adidas, has some tonal patterns same as Spanish national team’s 2018 away kit. The Wolves home kit made by Adidas is set to be launched soon. The leaked images of the 2020-21 home kits have no sponsor in it. It almost features the same colours as the current jersey.

The whole face and back of the jersey is gold in colour. The logos of Adidas and the club is black in colour. Some part of the cut sleeves and the amber collar is also black in the colour. The full kit represents the club’s colours- The Gold and the Black. Wolves 2020-21 home kit has an amber body with the sleeves having thick amber cuffs. The collar has amber piping with black colour.

The front face of the jersey features a tonal pattern, which was also seen in Spain’s away kit for 2018. The price and the launch date of Wolverhampton 2020-21 home kit are yet to be determined. While fans are happy after the leak as they feel the leaked kit far better then the ones, the club wore in the past three seasons. However, the texture pattern on the back can’t be seen on next season’s home kit.

Most Disappointing XI of the season | Premier League 2019/20

How can Manchester City lineup with Ferran Torres?

How can Everton lineup with Allan?

How can Arsenal line up against Chelsea? | FA Cup Finale 2020

The Wolves star who can continue his ascent to the top under Nuno...

FA Cup Final: Can it be Granit Xhaka’s Moment?