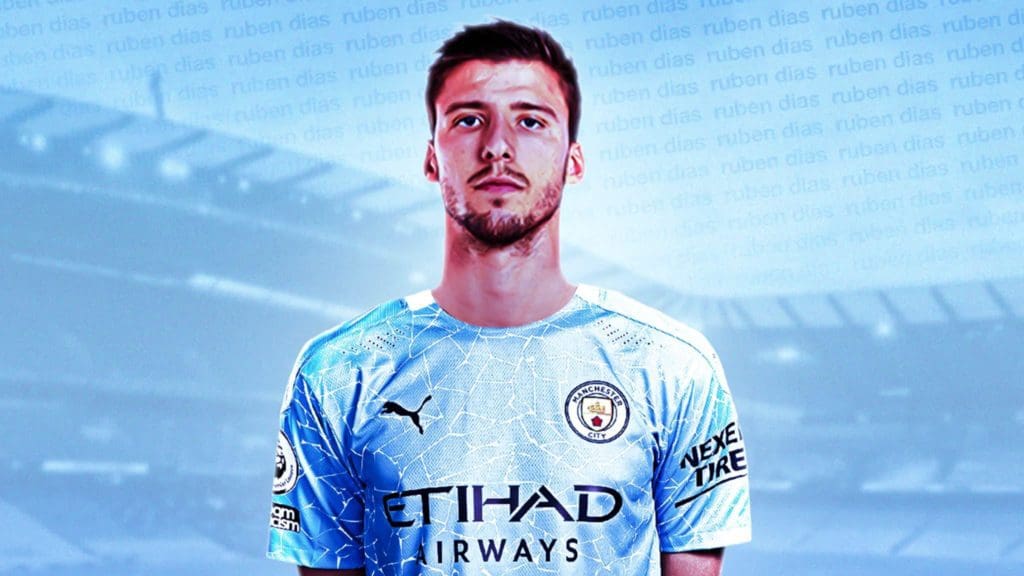 Following Manchester City’s shambolic defensive display against Leicester City on Sunday, the club have announced the arrival of a new center back in Benfica’s Ruben Dias.

The Portuguese arrives in Manchester for a fee of around £65m. The negotiations were in place long before the Leicester game but announcement was made post the game.

The 23-year old is now the 7th defender to arrive at Manchester city for a big fee since Pep Guardiola has taken charge. The players that arrived before Dias include Laporte, Mendy, Kyle Walker, & John Stones who has seemingly been relegated to the bench by Pep. Ruben Dias arrives on a club record fee paid by City for a defender. A record which has been broken so many times in the last few windows.

Laporte, who is arguably their best defender, spent months out injured last campaign which some believe ultimately cost them the title race. Dias is a very solid defender, but is he enough to sure up the leaky Manchester city Defence.? With other defenders before him failing to do so.

Over the summer City were very heavily linked with Napoli defender Kalidou Koulibaly but the two clubs couldn’t agree a fee for the player. So City had to look elsewhere for recruitment. It was assumed that they had settled on Nathan Ake and after his purchase most people assumed that City were done, until they signed Dias.

Interestingly, 23-year-old Dias doesn’t fit the same profile as Koulibaly. He has some experience in a top European league and also in UEFA competition, but nowhere near as much as Koulibaly. With Koulibaly winning out in comparison to Dias, having made more Tackles, Interceptions and Blocks last season.

So why have The Citizens invested in Dias?

Dias was better overall last season compared to Koulibaly, Dias committed less fouls, made more clearances and was dribbled past fewer times last season, He also won more aerial duels than Koulibaly. Dias is still only 23 and has the potential to cement his spot in the city team for years to come.

Dias is also a great defender on the ball which is Pep Guardiola’s preferred style of play, he completed an average of 66.02 passes per game with a pass completion rate of 88% in Liga nos. He also averages 5.6 long passes per game in the league.

A Pep Type Of Defender:

A key aspect that Pep Guardiola looks for in his defenders is their ability to receive and play passes in tight areas, where Ruben Dias shines and although he averaged fewer dribbles he was also rarely dispossessed on the ball.

There is no doubt that Dias is an important grab by Manchester City, but will he be able to Marshal a defense that conceded three penalties in a single game. This is where Dias’ composure will come into effect with the Portuguese less prone to giving away fouls and being able to move the ball in tight spaces without getting dispossessed. Dias is also a good distributor of the ball and can see passes that other defenders might not. He averages 0.5 key passes per game which is more than Virgil Van Dyke.

He will fit into Pep Guardiola’s system very well and is expected to strike up a defensive partnership with Aymeric Laporte, which will be their strongest pairing this season. Dias will surely add some strength to the defense but will he be able to stabilize the back four altogether.?

Pep Guardiola has now spent a ridiculous £408 million on defenders in his time at Manchester City, they seemed to have failed to replace what Kompany brought to their team. Ever since Kompany’s departure, the backline at Manchester city has not quite looked the same. City will be hoping that Ruben Dias is just what they need to win back the Premier League title this season.

A quick dive into Bale’s return to Tottenham
Will It be twice Beaten, thrice shy Between Leeds United & Daniel James?
To Top