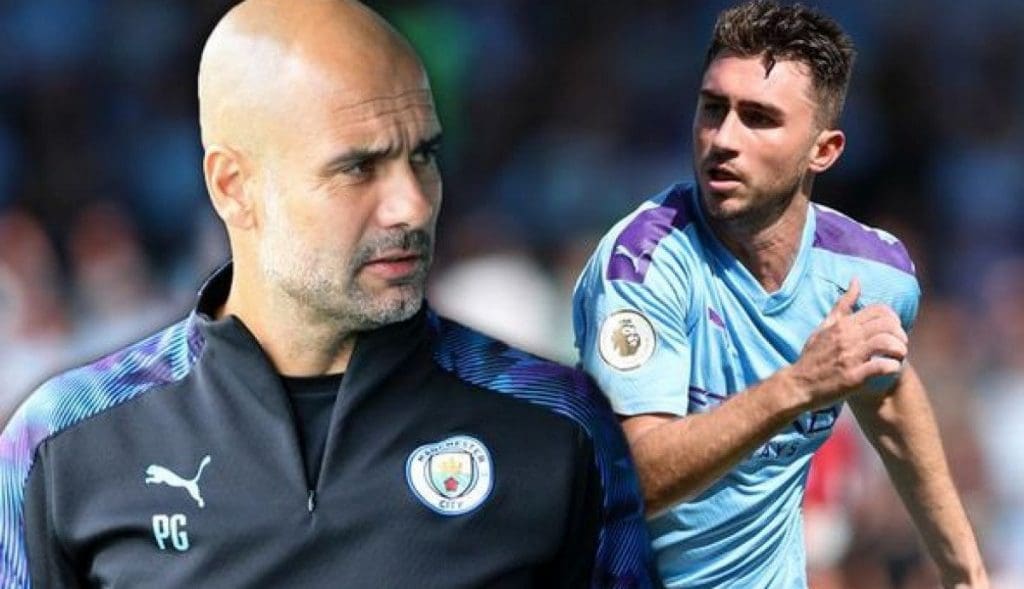 Since he arrived at Etihad, Aymeric Laporte has been hugely successful for Manchester City, winning 3 Premier League titles in just 4 years. Usually, one of the first names on Manchester City’s team-sheet – last season Laporte didn’t enjoy significant minutes and it has been speculated that the Spanish defender is weighing his options for next season with interest from Spanish giants Barcelona and Real Madrid only adding fuel to his exit rumors.

Should he leave, Pep Guardiola will again be short of options at defence, if one of the three centre-backs hits with an unfortunate injury. Let us look at why Manchester City must keep hold of Aymeric Laporte for seasons to come.

Pep Guardiola loves ball-playing centre-backs, and there’s a reason why Guardiola requested City’s board to sign Aymeric Laporte as a priority. Guardiola prefers 4-3-3 formation, but we hardly see Manchester City play in that shape. He prefers his fullbacks to occupy a different role which leaves the job of progressing the ball to his central defenders. Laporte despite his size and physicality, is an expert technical footballer who does this job with ease. The quality of his left foot is second to none in PL defenders.

When the ball progresses in midfield, City changes the shape to 3-2-2-3, where one of the fullbacks, mostly a left-back (Zinchenko or Cancelo) slots in the midfield two. That leaves Laporte occupying the left side of defence as a quarterback. His positioning allows Manchester City to transition from defence to attack and vice versa within a few seconds. Without needing any urgency to sprint, Laporte protects Ederson from facing a shot and the sweeping job is done by either Stones or Dias.

Even when Pep used him as left-back, Cancelo from the right side slots into the midfield, leaving Manchester City’s setup with back 3 again.

When City faces a high-pressing opponent, Laporte is a reliable source of distributing the ball to his teammates. His short passing ability is his strength but his ability to switch the play by passing the ball high up the pitch has resulted in goals for Manchester City. His stats speak for himself, 32 clean sheets in 75 appearances and 92% passing accuracy are the sole reason behind the success of Pep’s system in England.

Since his arrival, Laporte helped City win back-to-back league titles. After winning it for the second time in the 2019-20 season, Laporte was set to reach new heights. When things were falling in place for Laporte as he got his first call-up to France national team; he was hit with an unfortunate injury that sidelined him for months. Laporte had to miss 30 games for Manchester City. To everyone’s upset, City had to surrender their league title to Liverpool, and they failed to beat Arsenal in the FA Cup semi-final. Pep Guardiola’s Manchester City faced defeat from Lyon, which ended their dream for that season’s Champions League trophy.

Manchester City without Laporte were leaking goals left, right, and centre in that season. They were missing a leader in their backline even in presence of their captain Fernandinho. When Stones and Otamendi were paired together, it was difficult to determine the leader. Laporte was the calming presence City were missing that season. Their tendency to concede on counterattacks was exposed by clubs like Liverpool, Manchester United, Tottenham, and Lyon, who scored all three goals on counterattacks which eliminated Manchester City from UCL.

Laporte’s positioning helps his teammates to understand the situation and his ability to intersect the play was crucial factor behind their defensive stability.

Without Laporte City conceded 59 goals and won only 68% of their games. With Laporte, their win % rises to 80%. He has faced loss just eight times in his PL career. Even in their last season, with the stable partnership of Stones and Dias; City were able to win 77% of their games. Which explains a lot about the Spaniard’s importance in the line-up.

Aymeric Laporte was awarded Man of The Match in the City’s Cup final against Spurs and rightfully so, he deserved that award as he scored the only goal in the match and kept a clean sheet to win them their 4th consecutive Cup final.

His last loss before Euros came against Chelsea in the PL where Pep Guardiola went with his B-team and that loss was never the defenders’ fault.

Manchester City have an array of defenders in their squad. With all due respect to Stones and the brilliance of Ruben Dias, Aymeric Laporte has been the best center back in this squad when he has featured.

When Ruben Dias arrived at Manchester City, he was meant to be paired with Laporte, and thus City could have their able deputies in Stones and Ake. In a turn of events, Laporte was hit with an injury in June, which side-lined him for 107 days. After missing football for more than three months, Laporte was unlucky to encounter coronavirus. This resulted in John Stones taking his place in the starting XI and even after turning fit, Laporte was a mere spectator from the bench for the rest of the season.

Laporte showed his class in recently conducted Euros and he rightfully deserves that starting spot in Manchester City’s lineup. His all-around play against Slovakia, Switzerland, and Sweden – he also held Spain’s hopes against Italy. Laporte was Spain’s best defender in the competition, and he hardly let anyone feel the absence of Sergio Ramos in the competition.

With John Stones guiding England to the runner-up medal, Ruben Dias failed to carry his PL form in Euros, unlike Laporte.

John Stones kept the highest number of clean sheets among City players, but Laporte leads in other important stats of the game and thus Pep Guardiola must not feel reluctant to let the old guards of Etihad link up again. Pairing him up with Stones will only increase the technical ability of Man City’s lineup. While he could also work wonders with an old-school defender like Ruben Dias. Due to Laporte’s technical abilities and astonishing left foot, pairing him with the player of the year Ruben Dias could also work for Pep Guardiola.

Dias is an excellent defender and vocal enough to hold the backline. He times his tackles brilliantly and is a physical presence in the backline where Laporte could cover the ground due to his speed, can distribute the ball to his teammates, and join in as an auxiliary striker because of his ability to covert from set-piece situations.

The last time all three of the centre-backs started a game together, City won that game keeping a clean sheet. Hence Laporte could be used in any setup and thus Pep Guardiola must make everything sure to keep the player.

With all being said, it’s up to the player’s decision but, Manchester City should do everything possible to make Laporte’s future blue because of his importance, skills, and reliability.

Son Heung-min to sign a new deal in the coming days
Could a back three be the new highlight of the Premier league?
To Top