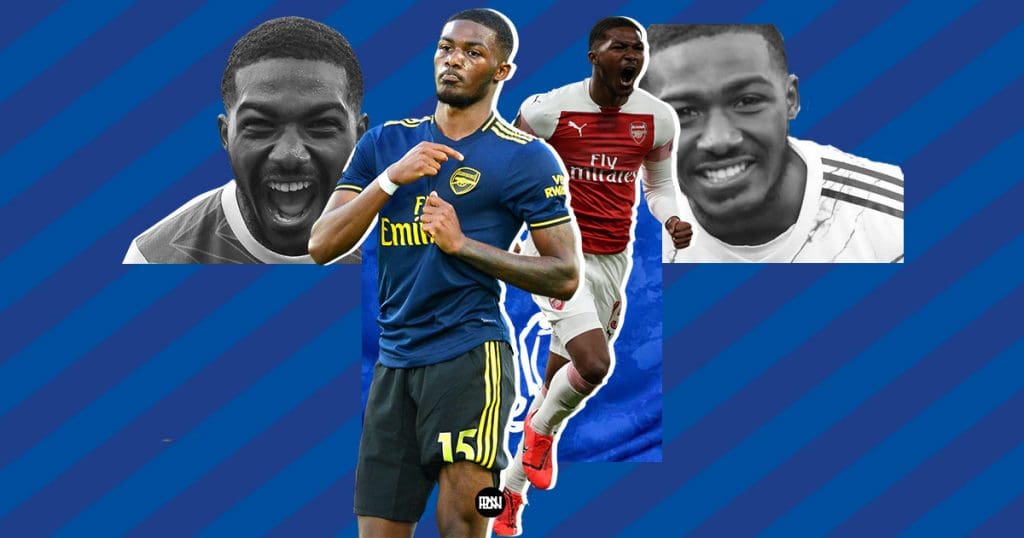 Ainsley Maitland-Niles has been linked with a move away from Arsenal for some time now, as he’s surplus to the requirements at London Colney, and links with Leicester City have resurfaced over the past week or so. The Foxes have been keen to bring the 23-year-old to King Power last summer as well, though nothing materialised then. But this time around things might end differently, considering Arsenal’s intensified love for James Maddison and their out-of-ordinary ways to structure such deals.

Ainsley broke into the Arsenal setup as a midfielder who loves to work his way up ahead the pitch, but considering how Arsenal were blessed with maestros in the heart of the pitch then – Ainsley was warming the bench with substitute appearances now and then (especially when the match is already put to bed).

Maitland-Niles fortunes changed when the Gunners were short on full-backs owing to injuries and that forced Arsene Wenger to call upon Ainsley to fill in. It didn’t take long for Niles to make himself home in his new position and put in some commendable performances. Since then Ainsley Maitland-Niles has played that filler role whenever either of the full-back was committed to the sidelines. Hector Bellerin’s long-term injury helped the England international to further his claims about being rather a successor to the role than just someone filling in till Hecky gets back.

Though as Hector hit the ground running, it was difficult for Ainsley to find a place in Arsenal’s eleven once again. But this is where Mikel Arteta came in; When the Spaniard took over the reigns at the Emirates, it didn’t take long for him to leave Niles out of the squad every once and again as a consequence of his sluggish display in training. Once Ainsley got it right and found himself playing once again, it looked like it will be tough to move him over.

With the resources available to Mikel, he shifted to a back-three with Kieran Tierney played as a left-sided centre-back and Ainsley Maitland-Niles donning the wing-back position with Pierre-Emerick Aubameyang up ahead as an inverted left-winger. The movements of these three caused much havoc for opponents and played a key in Arsenal’s FA Cup triumph as these three are what caused most of those Aubameyang’s goals against Manchester City in the semi-finals as well as Chelsea in the finale.

Playing as a wing-back attributed a lot to Ainsley’s games and putting in commendable performances consistently pushed Gareth Southgate to call him up for England. Maitland-Niles has a lot of qualities as a player which Southgate is obsessed with and the most indispensable being his versatility.

Being vulnerable to being versatile

The adaptable character of Ainsley Maitland-Niles game has been seen as a salient strength to his game, even when he was donning on the Gunners badge at the Hale End. But having no anchored position has hurt his career a lot. Rather than establishing himself at a specified position, he always is looked upon as rather a back-up to all of them. Once the first-choice player is back, Ainsley is forced to warm the bench again looking for another position to fill in. This has happened a lot during his time with Arsenal and it has led to frustrations.

Ainsley grew frustrated with having to scrape playtime than getting it. This always takes me back to how he went from being called up to England to not even getting any time off the bench. It takes plenty of mental toughness to be that guy in the team.

Maitland-Niles’ frustrations concluded with him demanding to get minutes in his preferred midfield position but Mikel Arteta & Arsenal were not ready to capitulate on his demands and that transpired into a loan move to West Brom where Sam Allardyce was looking to add some quality to his relegation fighting squad. Despite getting applauds for his performances every now and then, the lion’s share of his performances was bang average. Sloppy in interceptions and trying to mark lines, vulnerable to progressing the ball and then tracking back in the hour of need.

This may have been tolerable with the Baggies, but it will not be so when he does that at Arsenal or possibly any club fighting to be the best around the country.

Leicester City are trying to go shoulder-to-shoulder with the Big Six for some time now, and the presence of Brendan Rodgers at the helm shows how serious they are about contending with the best. Despite having difficulties with injuries last season, Rodgers managed to bring back European nights at King Power. This window, for Leicester, is not only about ameliorating the squad but also having a certain depth to substantiate their claim of playing every three days or so.

In Ainsley Maitland-Niles, that is exactly what Leicester gets. A Premier League proven lad with decent potential who can amass the quality of the squad as well as their back-ups. Although Leicester City do have James Justin, who proved to be a knight in shining armour for Rodgers when the Foxes were short with injuries – Ainsley will definitely be an upgrade to his prowess. Ainsley can realistically compete for those wing-back spots and potentially nail one of those as well considering the performances he put up there.

But Ainsley wants to play in the middle. The Blues from Leicester have a certain depth to their midfield contending for that double pivot in the middle in the likes of Youri Tielemans, Wilfred Ndidi, Dennis Praet, Hamza Choudhury, Nampalys Mendy, and the latest addition to the squad in Boubakary Soumaré. As aforementioned, Ainsley is a decent lad when plunked in the middle of the park but taking up a spot above the likes of Tielemans, Ndidi, and Soumaré looks pretty unrealistic.

Youri Tielemans, although linked with a move away from Leicester, is one of the essential figures in Brendan Rodgers’ squad. He plays those through balls off to launch attacks, holds the tempo of the play, and has a big box in him running up and down the field. In possession, City would stretch the opposition defenses horizontally and try launching either Tielemans or James Maddison in an empty space for them to progress the attack and exploit the gaps left by the opposition defence. The Belgian is also accredited with intelligence, which helps him influence the game in a number of ways.

Tielemans formed a colossal partnership with Wilfred Ndidi, as the dup controlled the play in possession and acted as a front for shielding their defence. Both of them have different qualities to showcase but were affluent force together. It’s difficult to see Ainsley coming in for either of them.

To add more to Niles’ woes, Boubakary Soumaré has already boarded his flight to East Midlands Airport. His arrival compiled by if Maddison were to bid adieu to Leicester, Brendan Rodgers might shift to a 4-3-3 with Tielemans holding the creative responsibilities from the middle of the part and the pivot of Ndidi and Soumaré holding on to possession with the ball and shielding the defence without it.

With this squad it’s hard to see any opening for Ainsley in the midfield. Even if he were to join Leicester with word over time in the middle, the 23-year-old will be forced to warm bench just like he is doing at Arsenal and probable play a similar filler role when Rodgers seduces him with minutes for injured full-backs every now and then. If that were to be the case, Ainsley might stay at Arsenal and do so considering the Gunners’ running tight for that right-back spot once again with Hector Bellerin linked with a move away from N5.

Ainsley Maitland-Niles can be a lethal signing for Leicester if he were to play the full-back or wing-back role. But if he comes in and demands to play in the middle of the park – it will just turn out to be the role one much similar to what he is doing at Arsenal. And the frustrations will grow again, like his as of now at North London.

Which Premier League manager will be first to get sacked?
Spurs ask trio to find a new club
To Top