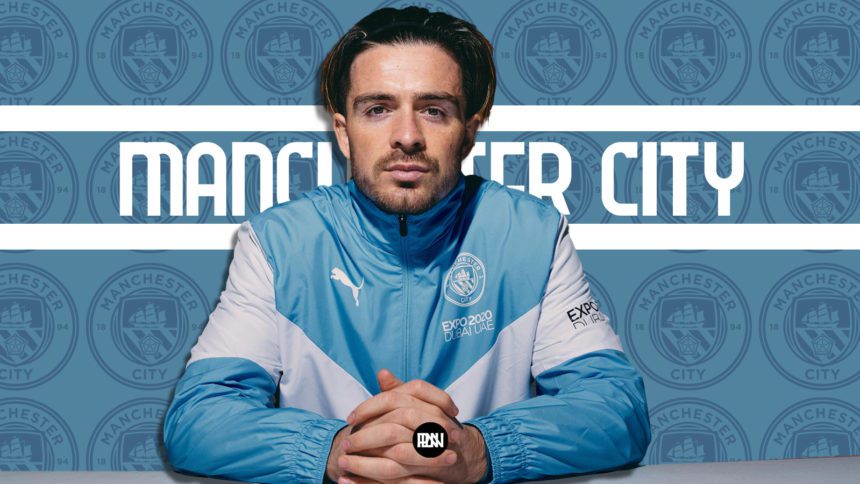 When Manchester City got their hands on Jack Grealish for a record fee of £100 million, there were, of course, high expectations but also skepticism surrounding his fee rather than quality. Before signing for Manchester City, he was adored throughout the country for the impact he had on the England national team at the Euros. However, that appears to have faded since his move to Manchester’s blue half.

Many believe that his performance levels have dropped considerably from his Aston Villa days. While it is true that his influence is far less compared to his Villa days, his performances have certainly not dropped, especially given the role he has under Pep Guardiola.

Three goals and three assists in his first season is undeniably not good reading, but there are reasons Guardiola rates him highly. In this article, we will look at his role in Manchester City with underlying numbers and a case for why he has looked lively during this season compared to the last.

Grealish was Dean Smith’s protagonist at Aston Villa during the 2020/21 season. He played from the left side, often attracting defenders toward him before releasing the ball to the likes of Watkins or Bertrand Traore. With six goals and ten assists, his numbers were also excellent. And alongside his future teammate Kevin De Bruyne, he topped almost all the metrics related to passing. 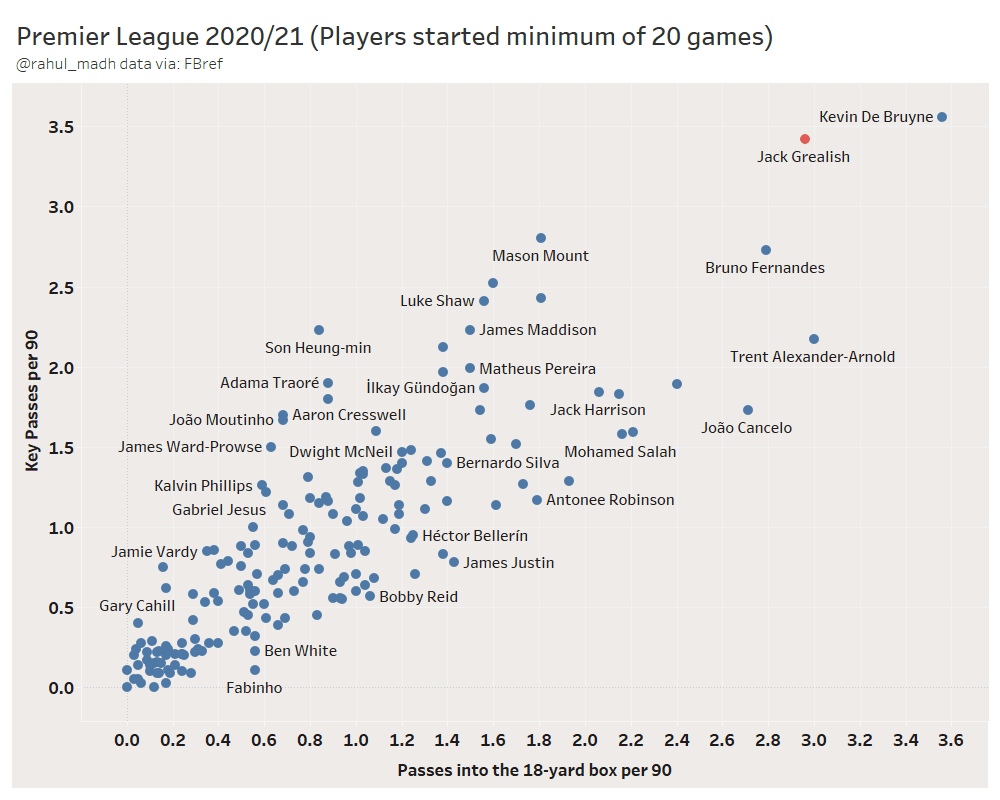 Further, he had a dribble success rate of only 64 percent but remained among the top players in terms of dribbles completed per game (2.5 per game). So, it is fair to say that he was given the license to have a go at the opposing fullback at his will.

Coming to the 2021/22 season, Jack Grealish’s role was more refined. He had a specific job to do, but contrary to the belief that he struggled, he did his role extremely well. His position and the areas he received the ball more or less remained the same, but a couple of factors changed. First, opponents sat back in numbers against Man City, making it hard for him to drive toward the space. Second, his part was to attract the defenders, which in turn created space for the rest of the creative players around.

Perhaps a telling statistic (image below) is his carries into the penalty box. Guardiola specifically used him ahead of Raheem Sterling because of his ability to retain possession despite carrying the ball progressively towards the goal. This allowed Man City to slow down the tempo and control the games by constantly moving the ball in the final third before the killer pass into the box. Additionally, it restricted the counterattacks by the opponents. 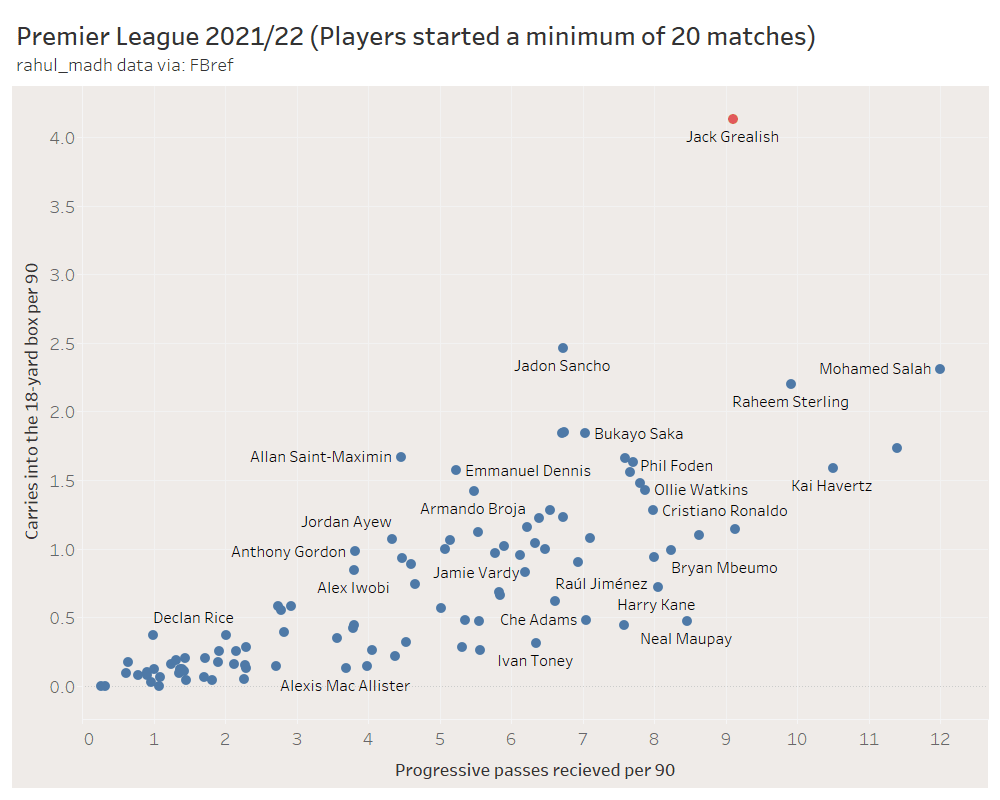 Once again, contrary to the belief that he failed to create chances, Grealish was among the top creators in the league and even had the highest open play xA (Expected assists) in the Premier League last season. 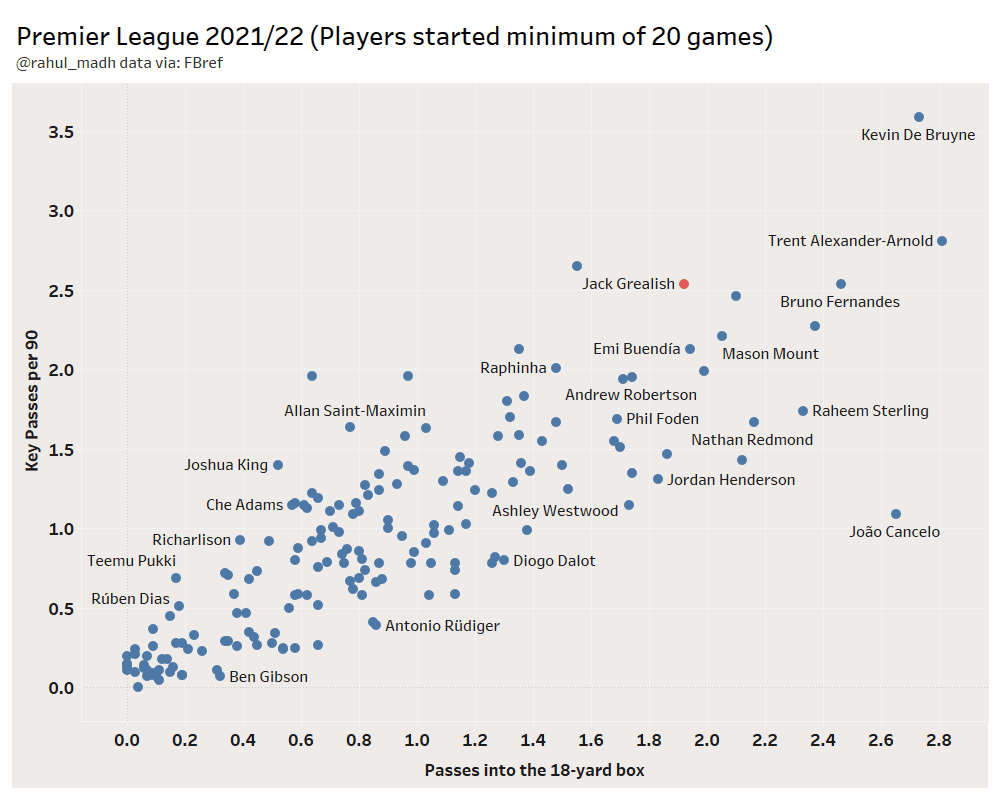 As mentioned above, he had more dribbles at a low success rate at Villa, but this changed once he came to Man City because of his role. Grealish lost possession 14.3 times per game in the 2020/21 season, but last season he conceded possession only 8.9 times per game.

“We didn’t sign [him] for the incredible goals or assists at Aston Villa. It was another reason and when he played he did it. He competes with top, top players as well and he knows it perfectly,” said Pep Guardiola on why he decided to opt for Grealish. The most important thing for the England international is that his manager and teammates know what he brings to the side.

Jack Grealish has only started three games so far, but his influence on the Man City team is growing. But what has changed since last season? Why does he look like his old self? For starters, his already impressive dribbling stats, despite a small sample size, shows improvement. He has a dribble success rate of 86 percent and completes 2.4 dribbles per game, a number similar to his days at Aston Villa. With some tweaks in possession combined with Erling Haaland’s arrival, Grealish seems to be back to his brilliant best.

Bernardo Silva plays a crucial role in unlocking Grealish’s potential. Although they played together for a few games from the left side last season, Grealish predominantly started with Ilkay Gundogan on the left side. Silva’s underlaps have opened up the space for him to either carry it into the space or thread a through ball to the Portuguese. This combination especially paid dividends against Manchester United and FC Copenhagen this season.

Erling Haaland’s arrival also opened up a new combination alongside Phil Foden on the right. The three ran amok against neighbors Manchester United, with some excellent individual play. While Haaland and Foden got their hat-tricks and stole the limelight, Grealish was the chief architect and set the tone of the match.

Moreover, last season, Man City looked to slow the tempo down and did not pose a threat on the transition compared to their previous years. Although the core principle of slowing the tempo remains, City’s willingness to hit teams on the break has improved with Haaland’s arrival. Grealish’s ability on the break and his pace while carrying the ball into space is very well known, and these factors are being put to use. This is also a reason he has looked menacing on the ball this season.

And now on the psychological part of the game, Grealish has settled and formed an excellent connection with the entire team, but especially with Haaland and Silva. These off-the-pitch relationship plays an important role during games as well and provides the confidence for players to express themselves. Here’s a perfect example of how he uses Silva’s underlap to his advantage, and his understanding with Haaland, which causes trouble for the opposition.

Manchester City have lost points in three games this season, and Grealish did not play a minute in all three. So, his influence on Pep Guardiola’s side is continuing to improve. However, he needs consistent minutes to showcase his talent and will hope that after Man City’s defeat at Anfield, he will get the game time he deserves. The question marks surrounding his fee will always be up for debate, but his quality and what he brings to Manchester City should never be in question. 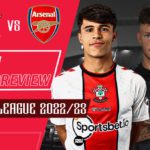 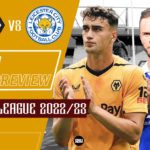