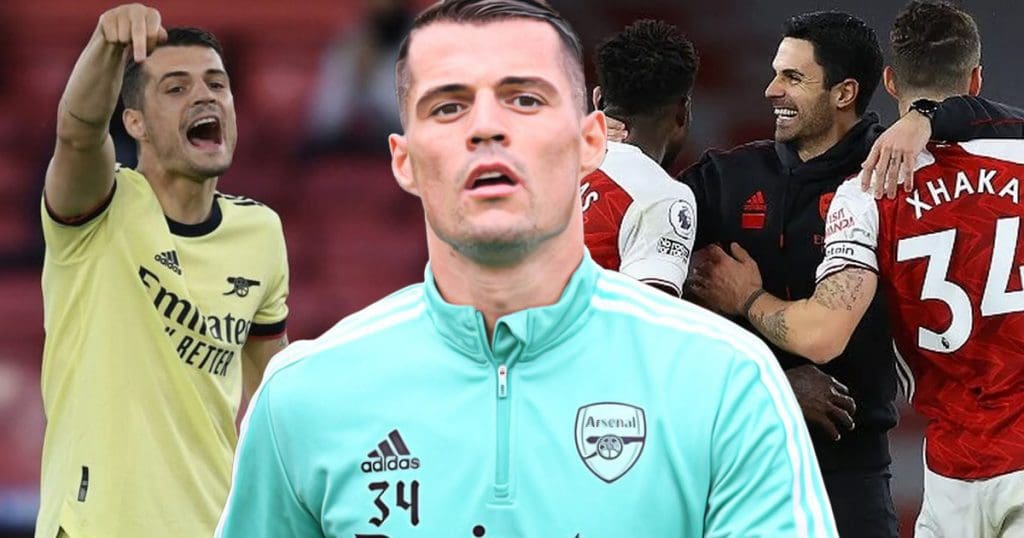 The uncertainty surrounding Granit Xhaka’s future at Arsenal has drawn a lot of attention to the club, especially among the fan base. The 28-year-old midfielder had been linked with a move away from the Emirates Stadium despite having two more years left on the five-year contract.

Xhaka who is among the last set of Arsene Wenger’s last piece of signings has had countless issues which have either divided the fan base or caused an issue within the squad, considering his outburst during a game against Crystal Palace when he was booed by a section among the fans after being substituted in the 61 minutes of that encounter. The Switzerland captain’s actions and vulgar words while walking out of the pitch caused an uproar, which in turn cost him the captain’s armband (after succeeding Laurent Koscielny) to the then Vice-captain Aubameyang.

From almost leaving the club after his outburst with the fans to the recent report of his supposed move to the Italian side AS Roma, Granit Xhaka’s story somewhat will forever make the headlines at the club.

Despite being often criticized, Xhaka has impressively been focal in his managers’ team selection to date. Being a regular under Arsene Wenger to having an impressive share of minutes under Unai Emery and seamlessly nailing a place in Mikel Arteta’s team selection. One of the team’s most controversial players has been a mainstay regardless of the manager.

With AS Roma lurking around for his signature, this summer transfer window has looked to be the Switzerland international midfielder escape route away from Arsenal but the tug-of-war between Arsenal and Roma is causing a lot of doubts, whether the young man will eventually get a move or he stays for another season at Arsenal (time will tell).

Before Jose Mourinho joined AS Roma, the former Tottenham manager had praised Granit Xhaka for his technical qualities and football intelligence while calling him the “main man” in Arsenal’s midfield. He stated that “Granit Xhaka is the main man in the entire Arsenal midfield, you can’t see it unless I lend you one of my eyes. Without him, Arsenal is lost. He is a leader. Remember mistakes are made by humans”.

What makes him so special?

Despite the obvious traits such as holding on to the ball, passing, set-piece threat, and the likes, he often commits fouls as well and has been less discipline, but it can be agreed that the versatile Xhaka’s football intelligence and ability to adapt his game to suit different system set him apart from others in his position. With Mikel Arteta favoring a 4-2-3-1 formation last season, playing double-pivot midfielders, Xhaka had been very instrumental in that setup.

Being a left-footed player, Xhaka’s presence in the midfield creates a balance and he gives the required cover at the left side of the pitch in an event where the left-back overlaps to join the attack. While he’s able to slot into the defence and form a back three, he allows both full-backs to join the attack during the transition. His technical and tactical nous gives the manager the option to manipulate formation during games.

Despite losing the captaincy armband, Xhaka has continually shown his leadership quality at Arsenal and while on international duty. His dedication, voice on and off the pitch has been a stronghold in the team.

Xhaka’s leadership quality has been what the team had been lacking since we let go of Patrick Viera, Tony Adams, and the likes. This quality had always been evident since his time at Borussia Monchengladbach. One of the journalists in Germany once revealed that Xhaka, “is a born leader. He’s very young but he’s played with the Swiss team at the World Cup and has plenty of experience. He’s taken on a lot of pressure, in public, he always talks to the press and if you ask him a question he’ll give you a proper answer. Xhaka is a leader on the pitch and a leader off the pitch”.

In 2016 while giving an interview with Arsenal Player (h/t TalkSport), he said, “I’m an aggressive player and a leader. I’m only 23 but I captained a good team in Germany. When I was younger, even though I had a big brother, my parents would give me the house key every day. It’s in my head that I am a leader and captaining Monchengladbach was very good for me”.

Granit Xhaka’s leadership, versatility, and role in the team can never be underestimated. Considering his qualities, it looks to be the right option if Arsenal decides to extend Xhaka’s contract rather than selling him on a cheap to AS Roma who has shown a lot of disrespect to his values and qualities by tabling a ridiculous transfer fee to the club, despite supposedly agreeing on a personal term with the player.

Arsenal have been vocal in the market and also tabled a reasonable bid to top-of-the-list replacement in Manuel Locatelli, though the Italian international is keen to join Juventus and rejected any such approaches. The Gunners are also looking at the likes of Ruben Neves and Bruno Guimarães if Xhaka were to leave, though as Locatelli they will also cost dearly with clubs quoting at least £35 million.

Mikel Arteta also has to bring in a suitable attacking midfielder to provide for Emile Smith-Rowe (or alongside him) and possibly a striker/winger if Lacazette & Nketiah were to leave. Hector Bellerin is another curious case, who will also have to be replaced if he is to bid adieu to the Gunners.

In Granit Xhaka, Arsenal have quite of a player in their hands, and keeping him is way cheaper than replacing him while it also allows the Reds from North London to prioritize other incomings.