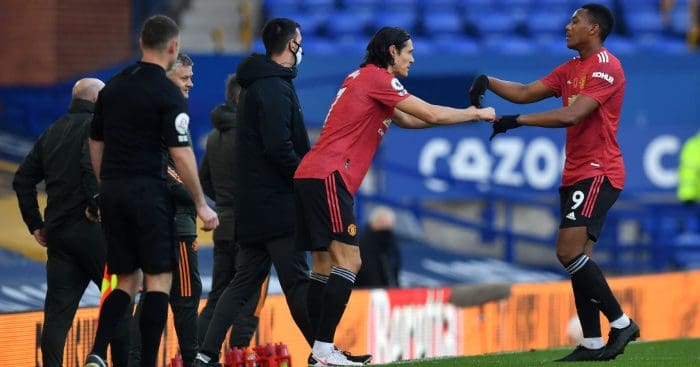 When Edinson Cavani, the 33-year-old aging center-forward was bought by United from PSG, fans of Manchester United complained about the signing more than they supported it. However, the Uruguayan international has been dishing consistent performances and has been an impressive addition to the team.

He is now being termed as the “Super Signing” because he has shut all the critics. They thought that he was but has played like a youngster, always running and pressing. He has been proactive in the field and has always put in that extra effort that we lack to find in Anthony Martial.

Edinson has been a bigger cause than just being a replacement of Martial. He has come into the squad with tons of experience which he happily shares with youngsters like Mason Greenwood and Marcus Rashford. In this process, he has also scored five match-winning goals for the club.

Even Paul Pogba agrees on the fact that the South American is way better than his national partner Anthony Martial. Paul, in a recent interview with MUTV, said:

“Everybody knows that Edi is a top-class striker and there’s few strikers like this in the world, and we had the chance to have one.”

“We know the hardest goals are those goals. We have talented players – Anthony Martial, Rashy in front, even Mason, that they can shoot from outside and stuff – but they don’t have this, the experience of Edi, and they don’t have the same quality of Edi as well.”

“So I think we complete each other with the players we have in front and Edi can obviously show his class like he did today. Those goals that we needed, at the right time, he’s always there at the right time and the right moment to help the team to win.”

The major difference that Cavani brings into the team as a number 9 is “being present at the right position“. As a centre-forward it is very important to be ready before the ball, an intellect that is nowhere present in Anthony Martial.

Martial has been absolutely dreadful, to say the least. He is playing in his own world, jogging when he needs to run; lurking when he needs to be present in the penalty box. Contrary to this, Cavani is sprinting and making runs all the game while also delivering goals when needed.

The most impactful possession with Cavani is his ability to head goals. The 33-year-old is brilliant in the air and can convert crosses from the wings which Martial even in his good days can’t. Last night too, against Liverpool, he hit a pin-point header towards the second pole which to his disappointment hit the woodwork and bounced out.

He has the experience, works hard to score, and wants to win, what else would you need from a centre-forward. He is a born match-winner and if United needs to bring the trophy home, he should be played over Martial, every time!

Everton vs Leicester City: Match Preview I Premier League 2020/21
Ryan Fraser & Allan Saint-Maximin can help Newcastle get out of mud against Leeds United
To Top