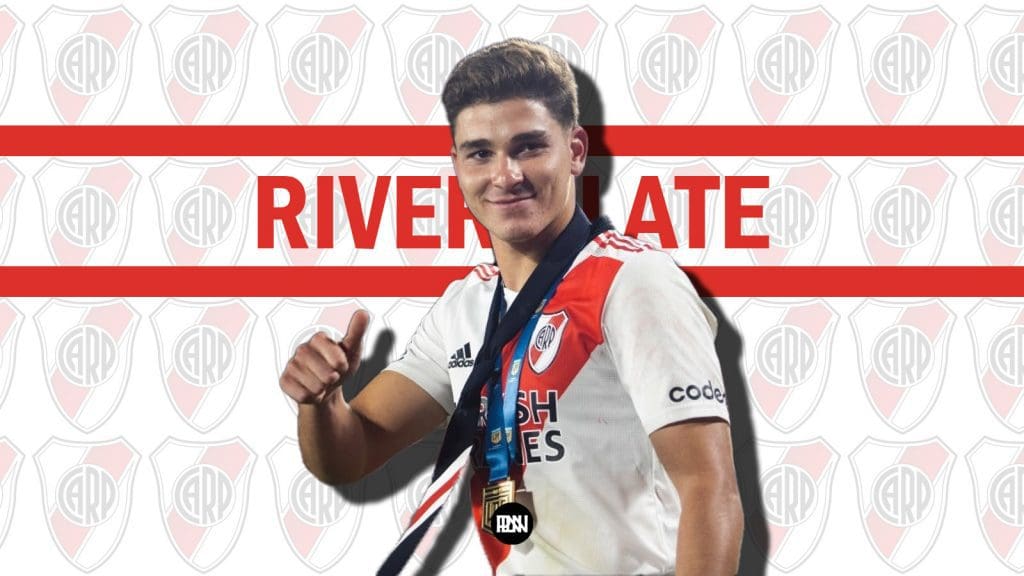 The season started with the Red Devils ready to mount their first serious title charge in 9 years. After signing the likes of Varane, Sancho & the fairytale return of Cristiano Ronaldo, the stage was set for Manchester United to challenge the City & Liverpool for the Premier League title. Six months later, the Old Trafford faithful have seen a manager getting the sack, sitting in 7th position & 22 points of the top of the table. The optimism around Ralf Rangnick seems to have faded as reports of cliques in the dressing room are now surfacing on social media. With such negativity surrounding the club, the fans are in desperate need of a lift & a young Argentinian might just be able to provide that.

Who is Julian Alvarez?

Julian Alvarez is an Argentine footballer who is currently playing for one of Argentina’s most historic club, River Plate. Alvarez came through the youth setup at his hometown club Atletico Calchin before joining the youth ranks at River Plate in 2016. Prior to his move to the Argentine giants, Alvarez also had trials for their fierce rivals Boca Juniors & La Liga powerhouse Real Madrid. He even managed to score 5 goals for the youth team in Madrid and was poised to sign for the club but age restrictions prevented  his transfer to Spain. Having already scored 19 goals this season, Alvarez is a hot prospect with a number of European clubs looking to acquire the services of the Argentine forward. With Manchester United being heavily linked to the player, let us look at his profile & how he can fit in at the club.

Julian Alvarez’ versatility is one of his major assets. The 21-year-old Argentine started his career as a wide forward/winger who could also play as a wide midfielder at times. The River Plate management felt that his ability to time runs into the box & also act as a physical monster in the midfield. But the player’s genuine goal-scoring instincts pushed the manager to try him as a Centre Forward. As soon as he made that switch from a winger/wide midfielder to a Striker, his tenacity & natural ability in front of goal became fairly evident.

His leadership qualities were also on full display when he scored a goal & led a youthful River side to a hard-fought draw against Boca Juniors at La Bombonera. Julian Alvarez’ dribbling ability & hold up play are also commendable which forces us to believe that he might prove to be a good addition in this Manchester United side.

Ever since Rangnick has taken control of this team, this 4-2-2-2 formation doesn’t seem to be working at all. Apart from their impressive 1st half impressive display against Crystal Palace at home, abysmal displays against Norwich, Newcastle & Wolves have raised question marks over the team’s lack of cohesion. There is a major issue which Man United are facing as the team does not have a striker who can play with his back to goal. Neither Ronaldo nor Cavani are renowned for their hold up play and for this formation to work, Manchester United need a player who has the ability of holding the ball up & linking with the midfield.

Alvarez has made a name for himself in Argentina as a poacher in front of goal but his hold up play is something that United should definitely look at. In order to heavily involve players such as Bruno Fernandes, Rashford, Sancho & Ronaldo, you need a player who can hold the ball, attract the attention of the opposition defense & allow runners to bomb forward. This is where Alvarez can jump in & possibly act as a focal point for Rangnick’s setup.

National Team & what the future holds for him:

Alvarez has appeared for Argentina’s Under 20 side at the Under-20s World Cup in 2019 and is now a part of the regular rotation in the Senior Team on a regular basis. He made his debut for the senior team against Chile in an International Qualifier in June 2021. With Aguero retiring from football, Lautaro Martinez is now Argentina’s lone Centre Forward & Alvarez can act as a solid backup at the Number 9 position.

The Red Devils have had huge South American names such as Angel Di Maria & Radamel Falcao in the past. Both these players came with massive reputations but failed to live up to the expectations in the Premier League. At 21 years of age, Alvarez has just started to mature as a footballer and this move might be a step too big for the young Argentine who undoubtedly has immense potential. This is why a move to Serie A is being touted with both the AC Milan interested in the player. It is believed that he will move to a major Eur

Argentina is a country that has produced a number of wonderkids who have gone onto rule the European stage. Players such as Messi, Aguero, Di Maria, Mascherano & many others in the current generation have cemented their legacies at their respective clubs with Julian Alvarez trying to follow in their footsteps. Inspite of all the speculation surrounding him, a January transfer looks unlikely as of now. Alvarez’ major focus right now is to somehow work his way into the Argentina squad for the 2022 Qatar World Cup which is why a move to a new club might be a risk to big for him to take. But if Man United do try to pull off this signing, then Alvarez might find it difficult to reject the prospect of playing at the Theatre of Dreams.