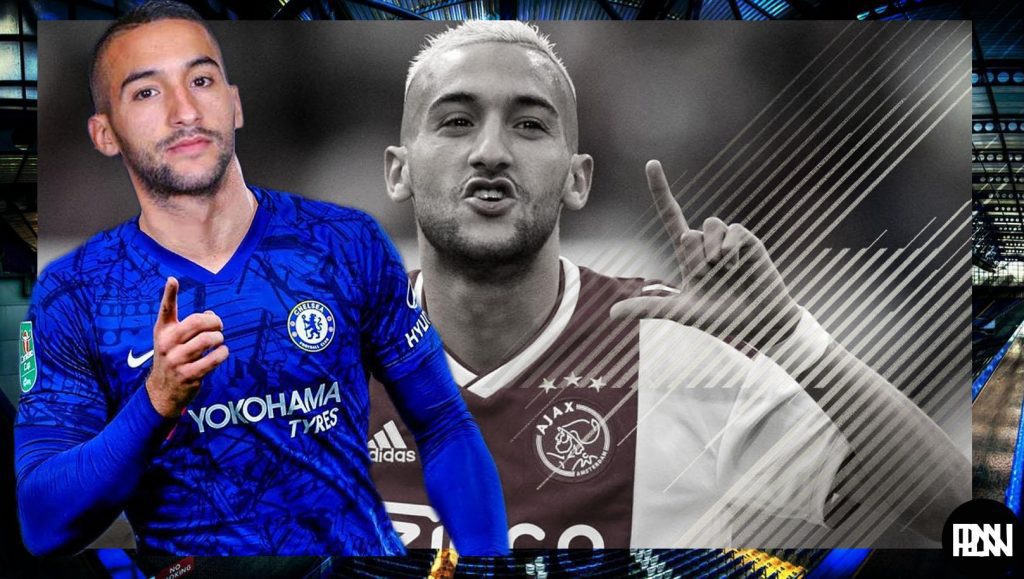 Chelsea board has gone all out to improve their squad and assist Frank Lampard to implement his ideologies for the future of the club. They have brought in big names like Timo Werner and Kai Havertz to improve the attack. But one name that everyone believes to make the greatest impact is of the ‘Moroccan Wizard’, Hakim Ziyech. Many tip him to be Chelsea’s Player of the Year already, even before him playing a single game in the Premier League.

Ziyech, 27, moved from Ajax to Chelsea for a fee of £37.4 million. The deal was confirmed much before the transfer window opened as Chelsea announced that he will be a Chelsea player on 14th February 2020. Ziyech has been one of the most crucial players for the Ajax team where he has won the Player of the Year award consecutively for 3 seasons.

Here we look at what all traits he has and how will he be an asset to Chelsea:

Hakim Ziyech has one of the best attacking figures as for the last two seasons he has a goal contribution per 90 mins of greater than 1. For the 50 games he played for Ajax in the last two seasons, he has 48 goal contributions, including 22 goals and 26 assists. Chelsea under Frank lacked the instinct in the final half to get on the score sheet and Hakim could be the guy who could open up the opposition defenses and also score many.

Also the best of Hakim can be brought out from the right hand side where he takes the ball on the left and can play perfect ball past the defensive line on the left flank where a perfectly timed run by Pulisic or Chilwell could end up in a goal. He, on the right side, along with Reece can be the best duo to cross the ball in the box. He has a total of 174 crosses in the 21 games he played for Ajax in 2019/20 season.

Also one of the major strengths of Chelsea is the average shots he takes per game. He takes 3.7 shots per game which is more than any Chelsea player in the past season. Even Tammy, being a striker did average only 2.5 per game. His ability to shoot was from not only outside the box but also he can cut in on his left beating his marker in the box and thus having a clear goal scoring opportunity.

Frank loves to play a high pressing game, for which Mason is preferred a lot, and Ziyech is a similar kind of player who is mostly the first player who starts pressing once his team looses the ball. Surprisingly, he does not concede much fouls as he has never taken more than 5 yellow cards in any of his previous few campaigns.

At last due to his great shooting and crossing ability, he is a dead ball specialist as well. He will surely take up the same responsibility at Chelsea, with the likes of Werner and Havertz in the box.

If he could match the physicality of the Premier League and stay injury free he has a lot to offer from his locker and he will surely be the key man for Chelsea’s success in the future.

Scout Report: Arthur Okonkwo
All you need to know about Project ‘Big Picture’
To Top