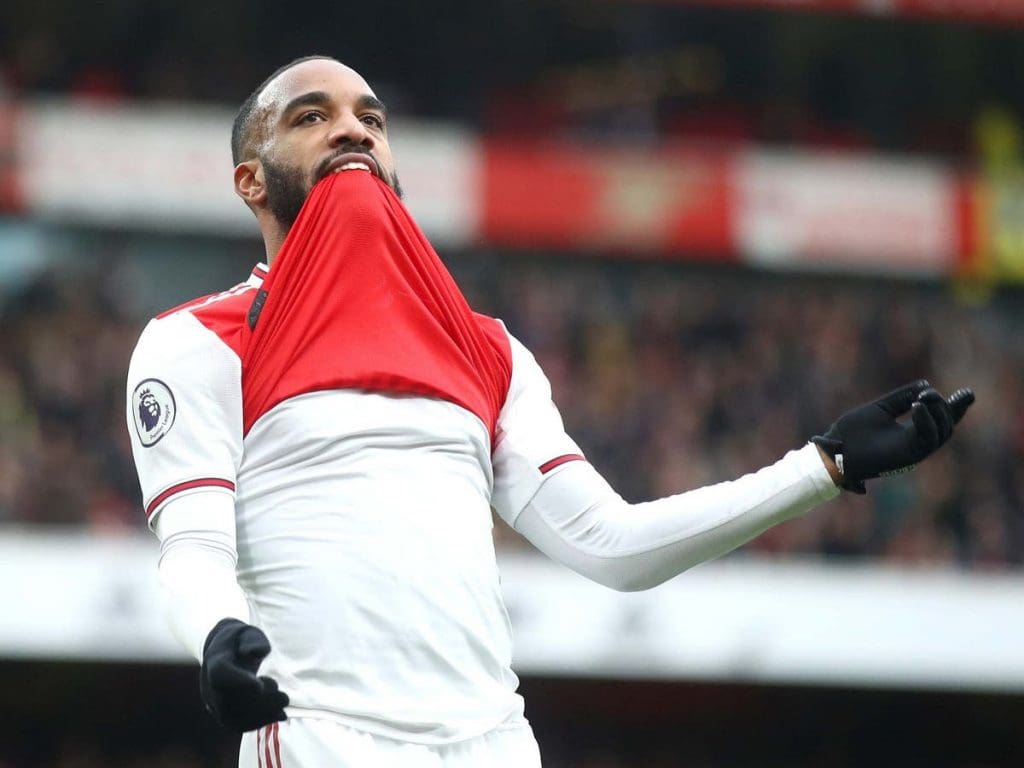 Alexandre Lacazette arrived at Arsenal in August 2017 from Lyon for 52 million Euros and it looks like the Frenchman could head back to Ligue 1, this time to Monaco, who are very interested in the Arsenal striker and look to add him to their ranks, as Monaco look to secure a place in Europe for next season. Lacazette enjoyed his time at Lyon as he netted 100 goals in 203 appearances for the Ligue 1 side and a move back to his home country could be something the 29-year-old must be eyeing.

Lacazette was one of Arsene Wenger’s, the then Arsenal manager, last recruits, and the Frenchman did not wait long to justify the money spent on him as he scored in Arsenal’s first home game of the season with a well-aimed header and he was immediately a fan favorite. Lacazette headed Arsenal’s frontline, as he formed a great partnership with Alexis Sanchez and Mesut Ozil, and the trio complemented each other perfectly as Alexis Sanchez and Lacazette were hard workers while Mesut Ozil had the eye to put the pass to start counter-attacks, which Sanchez and Lacazette relished to a great extent. Sanchez would start from the left and come into the center at times, while Lacazette would start in the center and try to move to the left as he enjoyed playing off Sanchez. However, Alexis Sanchez left for Manchester United in January 2018, but the Gunners were quick to replace the outgoing Chilean with one of Bundesliga’s top players in Pierre-Emrick-Aubameyang.

The Frenchmen enjoyed playing alongside the Gabonese striker as Wenger employed a 4-4-2 formation with Mesut Ozil playing behind the two strikers which worked wonders for their team. The Frenchman netted 14 Premier League goals that season and also chipped in with 4 assists while he also contributed to 3 goals in the Europa League with the North London side reaching the semi-final of the competition only to be knocked out by Atletico Madrid. However, you could always see that the day Arsenal moved to a formation which only had one striker, things would become uncomfortable, with Pierre-Emerick Aubameyang preferred in the striker role due to his deadly pace and finishing.

As fate would have it, Arsene Wenger retired in May 2018 and Unai Emery came to the fore as Arsenal manager for the next season. In a surprising turn of events, Emery’s first season actually turned out to be Lacazette’s best season as a Gooner, as he contributed to 32 goals in all competitions for the North London club as they reached the Europa League final, their first European final in 13 years.

WHAT WENT WRONG FOR LACAZETTE?

It all started going downhill in the 2019/20 season for the Frenchman as he started only 22 Premier League games for the club and scored a decent 10 goals while also providing 4 assists to his fellow team-mates. Arsenal had a chaotic 2019 as they sacked Unai Emery and appointed Arsenal legend, Mikel Arteta, who was an understudy to Pep Guardiola at Manchester City and like Pep, Arteta always wanted the details right. Lacazette was always praised for his work-rate but Arteta like Emery preferred Aubameyang in the striker role and with Arteta’s ambition of filling the first-team squad with more youngsters Lacazette started to feature lesser and lesser for the Gunners.

There were times of sheer excellence from the Frenchman, when, for example, he scored an absolute scorcher against Tottenham in the North London derby but these moments came rare, and eventually the Frenchman was on the bench more times than in the starting XI under Arteta.  The Gunners went on to win the FA CUP, however, Lacazette started only played 4 games in the competition and his only contribution was a single assist as he continued his poor form in 2020. During this time, he had to regularly compete for game-time with Arsenal starlet Eddie Nketiah.

At the start of the current season, Lacazette started the first game against Fulham away from home and scored Arsenal’s first Premier League goal in the 8th minute of the game as the Gunners went on to win 0-3 as they topped the table in the first week of the campaign. Lacazette continued his good form as he went on to score in subsequent games against West Ham United and Liverpool. However, after that Lacazette’s next goal came after 3 months in Arsenal’s 3-1 home win against Chelsea where the Frenchman slotted home the penalty with an assured finish.

But by now, even the Arsenal fans who were voting for the 29-year-old to stay at the club wanted to get rid of the French striker as, at times, it prevented Bukayo Saka from playing in his favored position, somebody the Arsenal fans love dearly. However, Lacazette did not pay heed to any of this as he went on to score against Brighton, a brace against West Bromwich Albion, and the third goal in Arsenal’s 1-3 victory at Southampton. However, the striker was again goal-less for a month before netting a penalty against Leicester City at King Power.

Lacazette is currently Arsenal’s current top goal contributor, but with 8 goals and 2 assists, it would not be a crass statement to say that the bar has not been set very high by Lacazette. The Frenchman’s contract is up in the summer of 2022 and A.S Monaco are very interested in Lacazette, as they know his qualities very well. One would ask the obvious question of ‘Why would Monaco want Lacazette?’, but the French striker has his qualities as he is very adept at holding on to the ball while he is also a very hard worker as he contributes to the defensive part of the game as well. Apart from this, Lacazette is also very potent in the air and all these qualities add up to somebody A.S Monaco would like to add their side.

The problem that Arsenal finds themselves with is whether to cash in on the striker right now and lose a striker who would provide a guaranteed 15 goals in all competitions, or lose Lacazette next summer for free. From what it looks like from the outside and based on reports out of Arsenal, Lacazette wants to make a move this summer as he feels his talents could be used elsewhere in a starting position for a top club in Europe. There are question marks regarding whether or not he would prefer a move to Monaco, however, come the summer, there could be various other suitors for the 29-year-old, and if the Gunners are offered anything above 30 million Euros, it looks very likely that the club would let Alexandre Lacazette move on to his preferred destination.

Michail Antonio to switch National Allegiance – A Blow for the Three Lions?
Is Gabriel Jesus ever going to become the player Manchester City thought he would?
To Top