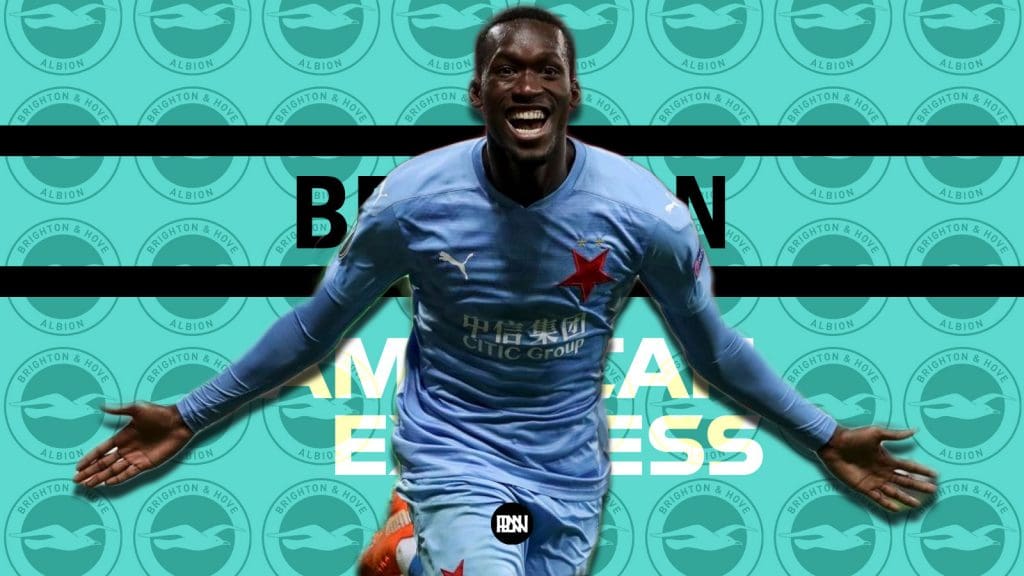 Every year, the summer Deadline Day brings with a tinge of excitement and anticipation from the fans as their favorite clubs have just 24 hours to sign new players before the transfer window closes until January. There is a flurry of activity from every club, and one such club in Brighton and Hove Albion who are looking to close a deal before the deadline of 23:00.

The Seagulls are reportedly close to signing 20-year-old striker Abdallah Sima on a permanent basis. A deal reported to be around the £7 million marks is set to be completed soon. The young striker is on the radar of clubs like Arsenal, West Ham United, and of course Brighton, who seem to have won the race for the Senegalese.

The preceded arrivals from Slavia Prague in Tomas Soucek and Vladimir Coufal have excelled in the Premier League, which could tempt Brighton, even more, to pay the money for Sima, especially considering how highly the youngster has been rated. With less than 24 hours to go until a deal can be closed, it remains to see if the Seagulls can complete the deal before the deadline, and the Brighton fans will be waiting with eager eyes to see if they can welcome a new player at the Amex Stadium.

WHAT WILL ABDALLAH SIMA BRING TO BRIGHTON?

It is no secret that Brighton lacked a prolific striker last season. Their xG stats from the 20/21 campaign left the fans exasperated, with the actual goals scored stats nowhere close to it. According to the xG metrics, the Seagulls should have been challenging for European spots, yet they found themselves just above the relegation zone. Some would call it bad luck, while some blamed the forwards for not making the most out of the opportunities provided. One, in particular, was striker Neal Maupay who was a serial underperformer of expected goals. While he helped the general build-up play, he was extremely poor in front of the goal, scoring just 8 goals in 33 appearances.

This is where Abdallah Sima can be of use to Graham Potter and Brighton. Although considered a future and long-term prospect by Potter, Sima could be pushed into the spotlight sooner than that. His first season in professional football showed the amount of potential and talent he has, with the young striker scoring twenty times and providing eight assists in 39 appearances. The Senegalese has impressed scouts, even drawing comparisons to the playing style of legendary striker Thierry Henry. While the comparisons could be a bit cliched, there is no doubt that Sima has the makings of a star.

The youngster has played as a right-winger for most of the last season, but played in the centre-forward position nine times, scoring 4 goals and giving 2 assists in that time. With Graham Potter ditching the pragmatic style of play he had undertaken at the back end of last season, there could be plenty of opportunities for the youngsters to score goals.

This season, Brighton have played a more attacking brand of football, but more importantly, have retained the ball more than their opposition in all three of their league games so far. They were perhaps unlucky again to lose against Everton, with the Merseyside club proving to be more clinical on the break. However, with the chances that Brighton created, a better goal-scorer would have probably buried those chances.

Sima would flourish in the 3-4-2-1 that Brighton plays, with the youngster proving last season that he is versatile in all three positions upfront. He has the flair and the will which will add some much-needed firepower to the Brighton squad. With Danny Welbeck suffering from consistent injury setbacks, it leaves only Neal Maupay as the lone fit striker in the squad and the arrival of Sima will also provide him with competition, pushing him to perform better. Many fans and pundits are of the opinion that the Senegalese has a similar style to Arsenal striker Pierre-Emerick Aubameyang, who is also known to play on the wings as well as a striker.

Another quality that makes him a very desirable option is his aerial strength. At 6 ft 2 inches, the Senegalese is about the same height as most of the Premier League defenders. He scored with his head six times last season, making him a valuable asset from dead balls. His superb heading ability is certainly a bonus in a league where defenders tower above most attackers and use their physicality to get the better of them. In simple words, all that Brighton missed last season was goals. They need a dominating striker who will take whatever chances he gets and score goals.

Sima’s performances in the Czech League have proved that he has a wonderful eye for goals and he has a poacher-type ability from inside the box. He led the league in non-penalty xG per 90 last season and has among the most touches inside the penalty area. While his attacking output is unquestionably good, he has a tendency to track back as well, which is helped by his incredible pace and acceleration. He has an immense work rate and has been known to track back on many occasions, which is something that manager Graham Potter will love.

For a team like Brighton, who are on the rise after a solid 20/21 season, Sima would be the perfect signing, to add a bit of flair but also to provide depth and competition among the squad. Like any other player, Sima also has his weaknesses, but Brighton could be the perfect place to develop his skills, under the tutelage of Potter who has been hailed by many as one of the best young coaches in the league.