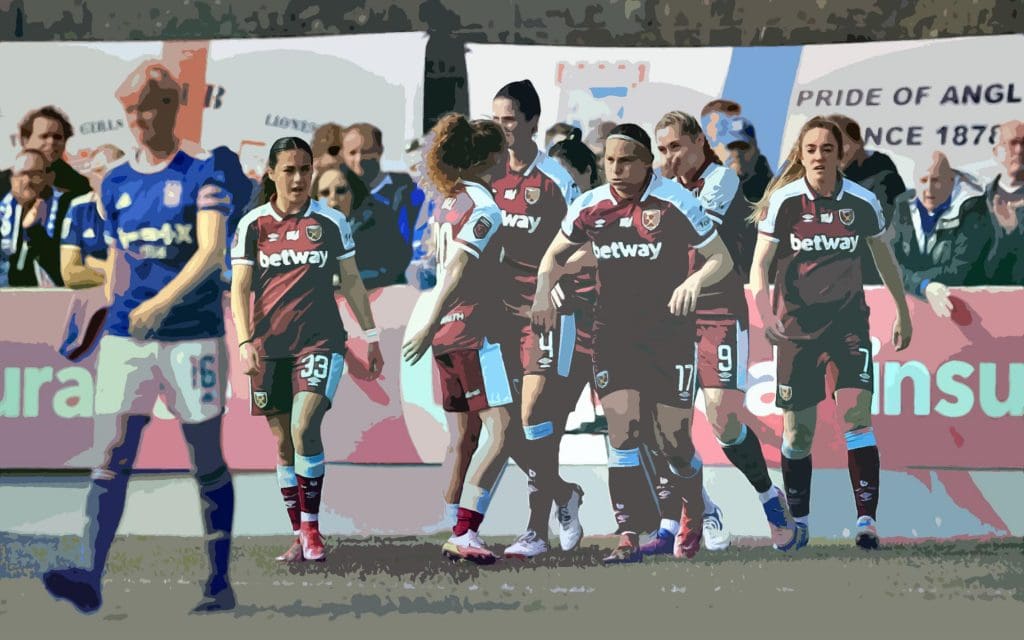 West Ham women just finished 6th in the Women’s Super League, their highest finish ever. Good, right? The players should be preparing for next season as a group, ready to stay consistent and push on. But, the reality is that the Hammers will need new additions to get anywhere near where they finished this season.

That’s because manager Olli Harder, captain Gilly Flaherty, quality midfielders Kateřina Svitková and Zaneta Wyne, star striker Lisa Evans, as well as promising youngsters Lois Joel, Halle Houssein and Anna Leat, are all leaving the club in the summer. This creates a massive problem for West Ham, where a third of their squad needs replacing. So, what do they do?

West Ham have already appointed former men’s player Paul Konchesky to become the team’s new manager, but the question is if the players they can approach are of good enough standard, or if they’ll have to settle with a season of regression. This presents an interesting scenario for West Ham. What happens next?

HOW DID THEY AFFECT WEST HAM THIS SEASON?

Well, I think it’s right to start with Olli Harder. The 34-year-old signed a deal which should have taken him till the end of next season. However,  he decided to depart a season early, saying this to the fans.  “I am proud and honoured to have had the opportunity to work for West Ham United and share this experience with our amazing staff, players, and, of course, incredible fans. Having reached a Conti Cup quarter-final, an FA Cup semi-final and earned more points this season than in any WSL season in the Club’s history, I believe I’m leaving the club in a really good place. I am sure that if it continues to build on this platform of success, the future is bright.” But, after this exodus, will they be able to build, or will they have to restart the foundation?

Gilly Flaherty has been the heart and soul of the club, so losing the 30-year-old will be tough. The former West Ham captain has bags of knowledge about the league, which will be leaving the Hammers next season, and will massively impact their backline and they’ll concede many more goals as a result.

Kateřina Svitková is someone I’ve previously done an article on involving a transfer rumour, which seems like it may happen after news of her leaving the club was made official. Svitková has been a key asset for the Irons, scoring 2 and assisting 3 in her 19 matches from midfield, and has been a brilliant performer this season, so it’ll be a shame to see her leave, especially if she’s not playing regularly.

Zaneta Wyne will leave the club after just 1 year, and manager Olli Harder’s departure probably had a significant sway in her final decision, The 31-year-old midfielder previously played under him at Klepp IL and would have been a factor in her decision to join, so her not sticking around isn’t the most shocking departure in the world.

20-year-old Anna Leat was the Hammers’ backup to Mackenzie Arnold, and she ended up playing 4 games this season, and did well, as she had a PSxG of 4.7, but only conceded 3 goals. Her save percentage at 90% is also in the top 5% of goalkeepers in the league, so even though she is replaceable as a backup, with Emily Moore likely to slot in, she was a talent.

Halle Houssein has been a wonderful midseason addition, cementing her place as a depth option in the West Ham squad, and would’ve been one who could improve if she was kept around the long term at Victoria Road, such as what happened with Ruby Mace, who left Arsenal after getting game time, even if it wasn’t off her dual-registration club in Birmingham City.

When she first joined the Hammers, the 17-year-old England U18 international said, “An opportunity came for me to come on loan, and I thought it was a great opportunity because, training full-time with a first-team, there’s so much exposure there, so I think that would really help me out.”

If she had stayed at West Ham, she would have got lots more game time, consistently improving and would’ve been playing at a high level. It could’ve been a win-win situation for Houssein and West  Ham, but Arsenal keep a talented youngster. West Ham could sign her later, but for now, she’s gone.

Lois Joel has been a bit more consistent with game time, playing 10 games as a 22-year-old defender. The England U19 international has been a player which West Ham likely hoped they could get on a new contract and build upon, but it seems that that won’t be happening.

When she joined the club, she said, “I’m super excited to be here at West Ham. Everything I’ve heard about West Ham has been really positive… all the girls have been so welcoming to me. This is an exciting squad with a lot of potential. It’s a really talented team to be a part of.”

However, like many others, it seems that she feels like staying at West Ham may not be worth it, and whether this is just a coincidence, an internal problem or an external problem is something we’ll likely see and find out throughout the season, even though people will always theorise.

However, West Ham will be able to rebuild, with the likes of Louise Quinn, Simone Magill,  Drew Spence, Emily Simpkins, Danique Kerkdijk and Gabby George all having WSL experience, available this summer and covering the positions of the people who left the Hammers. So, if they do good business and Konchesky sells them what they want to hear, there’s no reason why they can’t actually strengthen from this position.

Why Ivan Perisic to Chelsea is a win-win situation
Is Chelsea loanee Levi Colwill ready for Premier League?
To Top