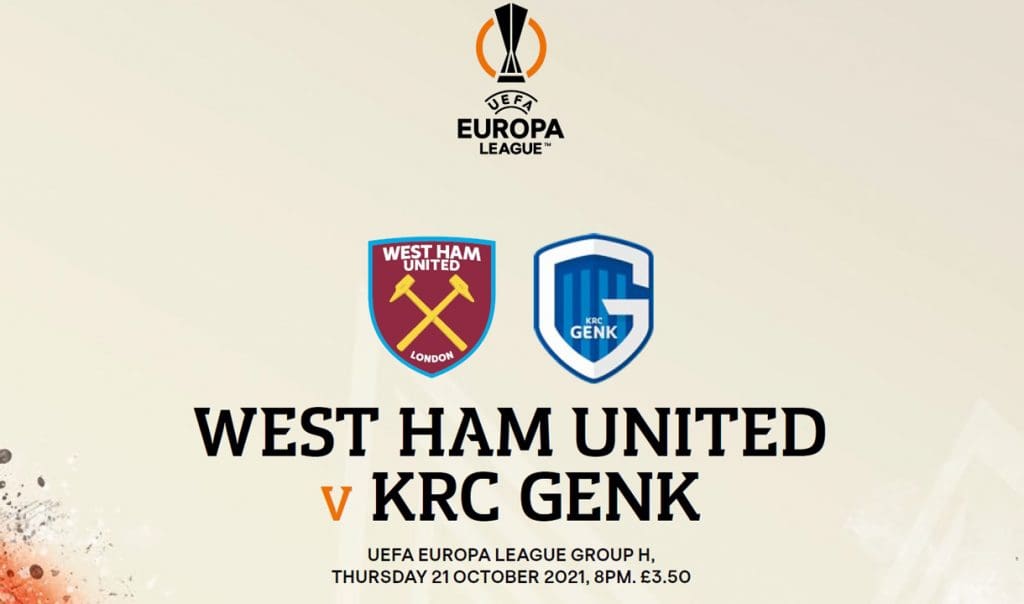 The Europa League is often overlooked because of its secondary status to the Champions League, but the same league is capable of throwing up some world-class and thrilling games of football, and it has proved that over the past few years. There may be a lack of big names in this league, but the quality of football has not deteriorated. One such clash that has the potential to give us a terrific game of football is the Group H fixture between West Ham United and Genk.

Genk travel to London on Thursday to take on West Ham United, in what will be the third game out of six for both teams in the group. The Hammers have been in fine form in the group, with two wins out of two so far and leading the group with Genk three points behind, level with Croatian club Dinamo Zagreb.

Both teams have had a contrasting run-in to Thursday’s fixture, and form could play a huge part on how the results turn out. Genk were dominated by Dinamo Zagreb in their last European fixture, while West Ham cruised to a 2-0 win and never looked in trouble. A win at the London Stadium would allow the Belgian club to go level on points with West Ham, but the Hammers have enjoyed an up-turn in form since last season, and look like a very hard team to beat.

West Ham will be without Ryan Fredericks, while fellow right-back Vladimir Coufal is also a doubt due to a groin injury. Midfielder Mark Noble is expected to be available for selection after missing the weekend win against Everton with a hip injury. Summer signing Alex Kral is ruled out after testing positive for coronavirus and continues to recover in isolation. Croatian midfielder Tomas Soucek suffered an injury to the face against Everton on Sunday, which left him needing stiches across the face. However, he has been passed fit by Moyes and will be in contention to start on Thursday night.

Genk manager John van den Brom will be without right-back Daniel Munoz who is out after being given a red card against Dinamo Zagreb. He will miss the next three games, including the double-header against West Ham. Other than Munoz, there are no other players missing for the Belgian outfit, and the team arrives in London with all players fit and firing. The manager will be expected to put out a very strong 11, with a view to get the team back to winning ways.

WEST HAM TO CONTINUE THEIR DOMINATION IN GROUP H?

West Ham United have had a perfect start to their Europa League campaign with two wins, four goals scored and none conceded. David Moyes and his men will be looking to continue their form against a Genk side which is struggling for form. Genk are on a three-game losing streak, and the Hammers will no doubt try to take advantage of that.

The Irons themselves are in a good form, having won 4 out of the last 5 games in all competitions, with just 3 goals conceded. Their run of form will have served as a confidence booster ahead of the game against Genk, and they will be hoping to make it three wins in the group to put them in the driver’s seat in the race to clinch top spot in the group.

For the first time in many years, West Ham have a squad depth which can enable them to challenge for trophies. They have a quality starting 11, and new additions over the summer, including Kurt Zouma, Nikola Vlasic and Alex Kral have ensured that the Hammers have more than enough options from the bench as well. This year, they have a real chance of winning the Europa League, and manager David Moyes has unsurprisingly given the competition a priority status, playing his key players in the first couple games.

Another factor that has helped Moyes’ men in their European campaign, is their solid backline. The West Ham defense has been immense in both games, having an xGA (expected goals allowed) of 0.3 in the first game and 0.4 in the second, proving that they have one of the best defenses in the Europa League. Summer signing Kurt Zouma has been instrumental in improving the defense, and backup defenders Craig Dawson and Issa Diop and Ben Johnson have all staked their claim to the starting 11 with their performances this season. This has seen an upturn in form and quality, prompting Moyes to brand this team as ‘the best team of his managerial career. ‘

With the form West Ham has been in, it is not strange that they are one of the favourites to go all the way in the tournament. If they are able to be consistent, David Moyes can well start dreaming about getting his hands on the first European trophy of his career.

WEAK GENK DEFENSE TO BE EXPLOITED?

Genk have been in a poor form losing 4 out of their last 5 games, and the gaps in their team were obvious in their 0-3 loss against Dinamo Zagreb at home. The Genk defense has had a torrid time so far this season, in contrast to Thursday night’s opponents. They have been as porous as a sponge, conceding 12 goals in the last 5 games.

The defense is a major issue for manager John van den Brom. Against Zagreb, the backline was susceptible to many mistakes, conceding two penalties and a red card. Although the team started the game well, defensive mistakes allowed Zagreb to grab a stronghold on the game. The Belgians seemed vulnerable every time the Croatian opponents counter-attacked, and were lucky to concede just three goals. Fans were left shocked at the poor defensive performances Genk players put up, and will be hoping that the coaches and management can get the issues sorted soon. There is a fear that this could be a short-lived European campaign, if mistakes are not resolved soon enough.

Another glaring issue was the loads of space the Genk defense left behind, meaning that a well-timed run could have split the backline open. It was something that Zagreb and Sporting Charleroi- their most recent opponents- took advantage of. Against Charleroi, they were perhaps unlucky to lose, with their attack having plenty of chances to win the game by a large margin, but were thwarted time and again by a superb goalkeeping performance by opposition keeper Herve Koffi.

With West Ham boasting the likes of Michail Antonio, Nikola Vlasic, Said Benhrama, Andriy Yarmolenko and Jarrod Bowen in attack, Genk must be aware of the space they leave in behind. West Ham attackers are known for their rapid pace and wingers Bowen, Vlasic and Yarmolenko having the ability to leave defenders in their wake with their pace. Antonio has been in tremendous form as well, and must be licking his lips at the prospect of facing a weak Genk defense.

It remains to see how Genk can cope with a powerful attack and will have to put in a mighty effort to get a result away from home on Thursday night. It is a must-win game for both teams if they want to qualify top of the group, and we could get to see an open game at the London Stadium.